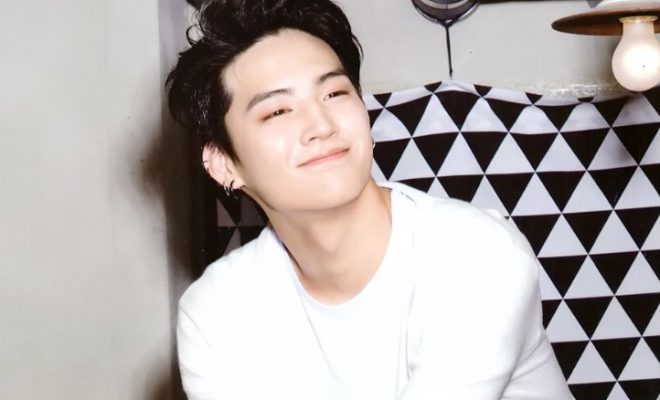 JB Gets Emotional After Watching Mom’s Birthday Message For Him, GOT7 And IGOT7s

GOT7‘s leader JB celebrated his 23rd birthday last January 6 in Taipei. The Korean boy group was in the capital city of Taiwan for a fan meeting in time for JB’s birthday.

During the fan meeting, a special video message, prepared by IGOT7s and dedicated to the idol, was shown. In the VCR, JB’s mom delivered a heartwarming message, not only for her son but also for the fans and other members.

“Today, 24 years ago, a child that loved dancing was born,” JB’s mom began. She went on to share how much her son loved music and dancing.

The GOT7 member, according to his mother, was not shy about his dancing, and will dance anywhere, either with a crowd or alone.

She recounted how JB told him his desire to be a b-boy, and what dancing gives him. “He said he just wants to dance. So I agreed,” she said. She went on to persuade her son to audition for JYP Entertainment where he trained and debuted.

“Thinking about it now, if I didn’t agree to let him dance, I would not be able to see him singing, dancing and getting loved by the fans,” she said. She relayed how proud she was of her idol son.

JB’s mom then reached out to GOT7’s fans, and thanked them for giving strength to the boys. “I am thankful to the extent that my heart is in pieces,” she remarked. She also sent her gratitude to fans who were not able to attend the event. “IGOT7s are our children’s girlfriends, younger siblings, noonas and parents,” she added.

“Next to our seven stars,” JB’s mom began as she addressed the members. “Just like the Big Dipper that becomes the guide when we are lost, I hope you all can become stars that can guide, not only mommy, but also the young IGOT7s who are growing up.”

She ended her message with a short but sweet message to JB. “And to my precious and beloved son, Im Jaebum, Happy Birthday and thank you for being born as my son.”

Upon hearing this, JB could not help but tear up. According to him, his tears just flowed uncontrollably when his mother said “I love you.”

He added that although they exchanged “I love you” before, but to listen it on stage has made it difficult for him to hold back his tears.

IGOT7s gifted JB with a birthday cake and fan projects to commemorate his special day.

The hashtag #BestLeaderJB was used by worldwide fans to trend, and celebrate the idol’s birthday on Twitter.