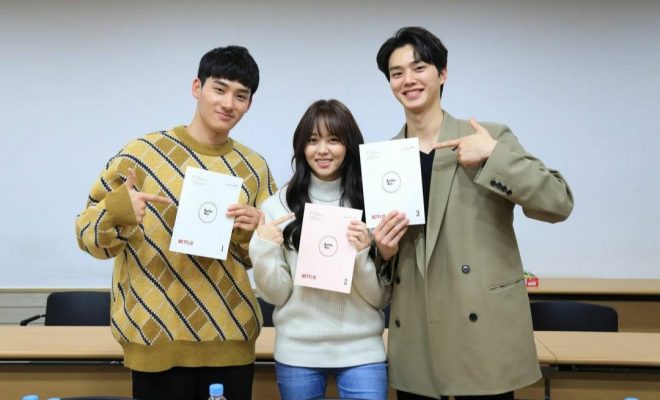 Love Alarm fans, your favorite trio are gearing up for the second season!

Kim So Hyun has teased fans with an update of the well-loved Netflix series on her Instagram account.

Together with her male leads, Song Kang and Jung Ga Ram, the beautiful actress beams with excitement in captured photos of the script reading session. Likewise, photos are also released on Netflix Korea’s Instagram page.

In October 2019, the second installment was officially announced with a video from the lead cast. The first season introduced the story of Jojo.

It quickly becomes a social phenomenon. While everyone talks about it and uses it to test their love and popularity, Jojo is one of the few people who have yet to download the app. However, she soon faces a love triangle situation between Sun-oh whom she starts to have feelings for, and Hye-young, who has had a huge crush on her.

What to expect on Love Alarm Season 2?

The first season ends with Jojo (Kim So Hyun) hoping to unlock the shield on her love alarm app, while running into Sun-oh (Song Kang) and his girlfriend Yuk-ji at a Love Alarm 2.0 launch event where Hye-young (Jung Ga Ram) also rushes to find Jojo.