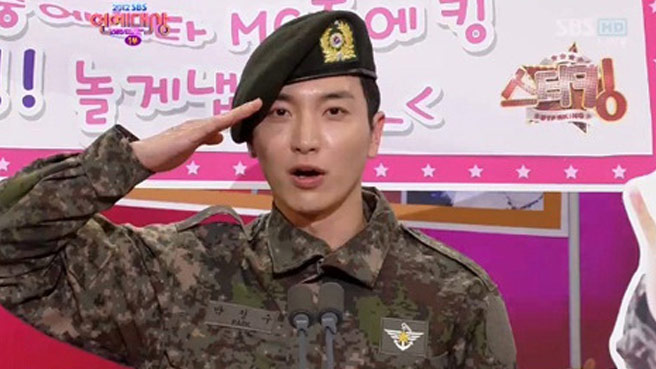 On April 18, a tweet confirming the visit of Super Junior‘s leader, Leeteuk, to Kona Beans, made fans rush to the cafe to see him.

ELFs (Ever Lasting Friends) immediately knew who was being referred to in the tweet as Leeteuk is of course the leader of Super Junior, and his username on Twitter is @special1004.

Trans @konabeans0070 Is it true that if you come to Kona Beans today, you can meet the part time worker with (cont) tl.gd/n_1rjr0ut

After just a few hours, the tweet was then deleted and changed to explain and apologize to the fans who expected to see Leeteuk in the cafe that he was only going to visit the cafe and come to see his mother.

On the same day, a photo of Leeteuk wearing a military jacket running from the SM Entertainment building was posted on various Super Junior dedicated fansites. It seems he not only visited the Kona Beans store, but also went to see the members before they all leave for South America for Super Show 5.

Kona Beans is a cafe owned and managed by the mothers of Super Junior members Leeteuk, Sungmin and Kyuhyun. The boys help out in the cafe whenever they have free time. Leeteuk, who is currently serving his mandatory military service, probably made the visits during his holiday time from the military.