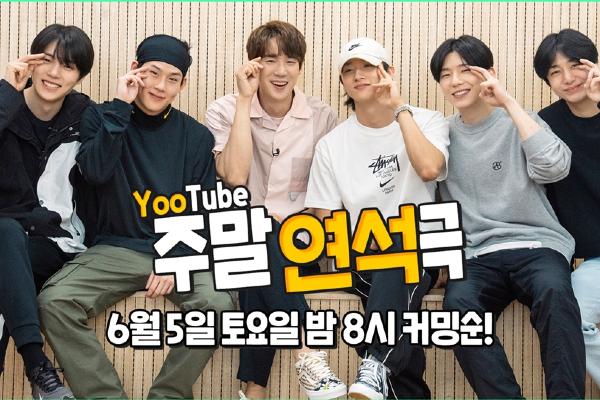 MONBEBE will witness a unique combination as MONSTA X joins actor Yoo Yeon Seok for a fun-filled show this weekend!

It might have been an unexpected interaction but these entertaining young men will absolutely show off their exciting chemistry. Through a preview teaser released on June 3, the talented members of MONSTA X are seen showing explosive excitement as soon as they meet the well-known actor. The members continuously spoke in amusement “It’s Goo Dong-mae! It’s Goo Dong-mae!,” referencing Yoo Yeon Seok’s character in the tvN hit Korean drama Mr. Sunshine.

On the other hand, Yoo Yeon Seok took his time to learn how to act cute with Joohoney’s guidance. The preview teaser also featured the members asking Yoo Yeon Seok to participate in the GAMBLER Challenge. In particular, the challenge execution will herald a unique collaboration which adds huge curiosity for the full reveal.

Furthermore, MONSTA X will host two challenges through the global mobile video platform TikTok. The members prepared a performance version for “GAMBLER” and a rock-paper-scissors game version. Specifically, the challenge starts earnestly on June 4 and is expected to gather heightened interest and participation from global fans.

Meanwhile, The Yeonseok Weekend Show will be released on June 5 at 8PM KST through Yoo Yeon Seok’s official YouTube channel.

While the tvN Korean drama Hospital Playlist Season 2, which stars Yoo Yeon Seok, will premiere on June 17 at 9PM KST.

Furthermore, MONSTA X will continue its album promotions for One Of A Kind alongside the title track “GAMBLER” on various music programs and variety shows.