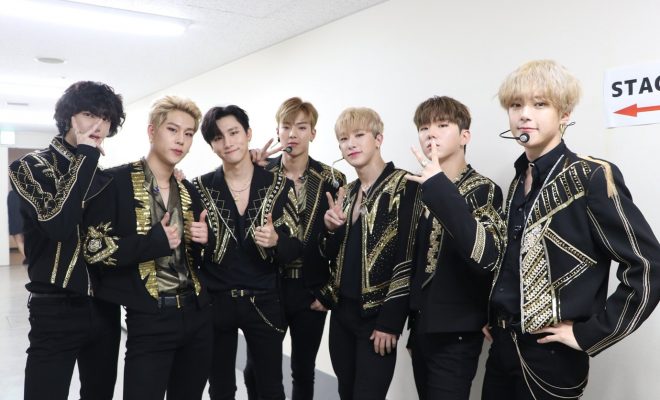 MONSTA X is not only talented, they also have talented fans.

MONSTA X sat down with Glamour Magazine to watch handpicked fan videos. In this first part of “You Sang My Song”, the boys were astonished at Monbebes’ fan covers.

“Too beautiful to handle”

First on the list is “Beautiful” from their The Clan Pt. 2.5: The Final Chapter album. Coopa from Germany made her own English-Korean version of the song. While watching everyone was mesmerized while Joohoney gestured him having chills because of her voice. Kihyun pointed out that she changed the melody. Butting in, Joohoney mentioned how she is beautiful too, adding that he wants to collab with her. Minhyuk liked her variation of melody. Meanwhile, I.M admired how she controlled her voice.

Aside from MONSTA X reacting to the fan covers, Glamour tracked down the fans and made them react to the group’s reaction. Coopa was close to tears when she saw how much the boys liked her cover. She mentioned that them watching her video means so much to her. She also added, “Seeing that they like it is so unreal.”

Next is a violin cover of “Play It Cool” by Sharlee from Georgia, USA. The song is MONSTA X’s collaboration with famous DJ, Steve Aoki, for their Take. 2 We Are Here album. While watching, everyone was grooving to the music with an added funky vibe. Joohoney is the king of reactions, exclaming sounds of appreciation. Meanwhile, true to the boys’ playful nature, some of them imitated the violin. I.M shared that he learned the violin when he was seven years old but compared to her professionalism , he was just a baby. Kihyun pointed out that there are very limited movements you can do on a violin. He said that you also have to learn how to move and she does it so well. Shownu added that she is very talented.

Sharlee was ecstatic when she saw the group’s reaction. “Oh my gosh, they know I exist!”, she happily said. She said that one of her dreams was to meet a K-Pop band or for them to find out she exists. “[This]  motivates me even more to keep going with my channel” she said. The violinist also added how MONSTA X love their fans and how they constantly inspire her to make music her own way.

“There’s something about you”

Next up is another cover of “Play It Cool”. Aya came all the way from Lebanon with her song and dance cover. Her silly dance moves earned her laughter from the group with Kihyun saying that she’s really cute. I.M said that she stayed true to the song and “really played it cool” with her octopus dance. Joohoney agreed and noted that he likes her dance moves.

The shy and smiley girl said she was very honored because they said so many nice things about her. Aya mentioned how much they motivate her and inspire her to do what she wants to do because they work so hard. She also said that they help her ignore the people who judges her. The girl ended it with a giddy laugh saying that “MONSTA X likes my voice and they think I’m cute!”.

The last cover on our list is an acapella cover of “Jealousy”. The track is from their The Connect: Dejavu album. Mallorie from Texas, USA posted the cover on her YouTube channel. Joohoney pointed out her confidence and praised her rap skills. Kihyun also mentioned that he can see the confidence in her face. They gave it a thumbs up and told her that she did a great job.

Mallorie said that seeing them watch her video is very cool and awesome. The encounter also made her love them even more. She talked about how some artists don’t pay attention to their fans but “seeing MONSTA X acknowledge little people like me is a humbling experience”. She thanked them for taking the time to watch her video and that their reaction made her year.

Read: MONSTA X Wraps Up Summer With A Fun Party In “For The Love Of It” Music Video With Pepsi

According to Glamour, this is just the first part of their fan cover watch series. Stay tuned for the next part at Glamour’s YouTube channel. Check out the video below!

We need your support! If you have enjoyed our work, consider to support us with a one-time or recurring donation from as low as $5 to keep our site going! Donate securely below via Stripe, Paypal, Apple Pay or Google Wallet.
FacebookTwitter
SubscribeGoogleWhatsappPinterestDiggRedditStumbleuponVkWeiboPocketTumblrMailMeneameOdnoklassniki
Related ItemsGLAMOURjealousymonsta xPlay It CoolWho Do U Love
← Previous Story BTS Impressively Surpasses 600 Million YouTube Views With “FIRE”
Next Story → MONSTA X’s Kihyun Trends Worldwide After Going On A Random Tweeting Spree With Monbebes