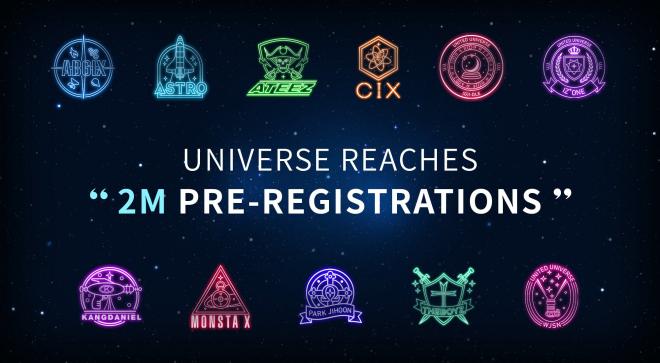 The new K-pop entertainment platform, UNIVERSE, which is preparing for its launch in early 2021, drew more than two million pre-registrations, as reported on January 11. The upcoming online playground has been steadily attracting fans since its reveal.

Earlier, UNIVERSE announced its pre-registrations beginning November 12, which quickly surpassed one million K-pop fans from 188 countries worldwide. The pre-booking on the official website closed on January 11 but remains available on Google Play. Meanwhile, the Apple App Store registrations will be opening soon.

In particular, the platform offers special rewards to pre-registered users only. Those vary from one raffle ticket to have a chance for its artists’ events, special costumes to decorate artist characters in the “Studio” function, and one welcome merch stamp needed to receive “Welcome Goods”.

Additionally, UNIVERSE unveiled 11 idols who will be a part of its platform, including Kang Daniel, The Boyz, Monsta X, Park Ji Hoon, CIX, ASTRO, AB6IX, ATEEZ, (G)I-DLE, WJSN, and IZ*ONE. Moreover, the lineup will continue to grow even after the launch of the platform.

UNIVERSE delivers a new K-pop entertainment space, presented by NCSOFT, delivering brand new possibilities. It will provide fans with various attractive features and content, unseen on other platforms. It will also record and reward fandom activities, online and offline.

UNIVERSE will combine IT technologies such as AI (Artificial Intelligence), motion capture, and character scanning to bring the best experience to fans. So far, it revealed some intriguing functions that will be fun to explore.

Meanwhile, further information on pre-registration can be found on the official site and Google Play.