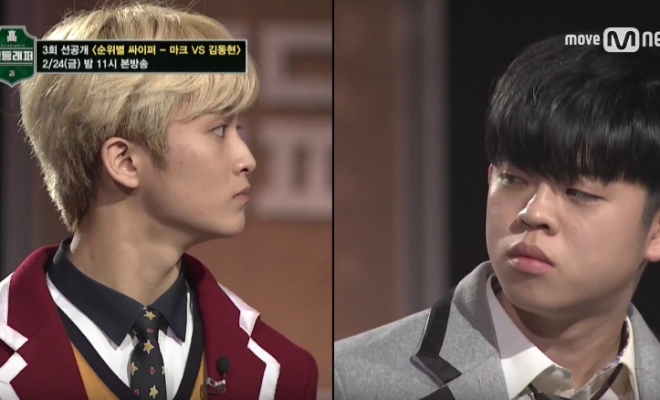 The competition is getting more intense as Mnet’s newest rap survival program ‘High School Rapper’ goes into a heated battle of sick lines in its third episode preview.

In the preview, mentors Yang Dong Geun and Swings revealed their desire to mentor Seoul Gangseo and West Gyeongin, respectively.

Yang Dong Geun chose Seoul Gangseo because of NCT‘s Mark. Swings, on the one hand, sided with West Gyeongin because of Kim Gura‘s son, MC Gree. “I would like to be the mentor of West Gyeongin, where Kim Donghyun (MC Gree) whom many people dislike, is in,” he said.

Mentors will choose the cipher battle order by picking a line-up number from one to nine. Each line-up consists of a representative of each province. Anticipated participants Mark and MC Gree will take center stage as they represent their respective provinces.

“Just looking from here, there is a group with a really fun line-up,” Yang Dong Geun commented. The participants welcome Yang Dong Geun’s words, clearly aware of the-line up which the rapper was referring to. The hunch of the audience was proven right as group six was chosen, which include both Mark and MC Gree.

“We are the two people who was the topic of conversation before joining ‘High School Rapper,” MC Gree said during the backroom interview.

Mark, on the one hand, expressed his wariness towards his competitor. “To be honest, I am most wary of MC Gree. I was looking at him without realizing it,” he said.

The preview showcased MC Gree’s stage. The NCT member had nothing but praises for MC Gree, exclaiming that he performed well. Mark also expressed his confidence in the rap battle.

Watch the full preview below.

Hellokpop, as an independent Korean entertainment news website (without influence from any agency or corporation), we need your support! If you have enjoyed our work, consider to support us with a one-time or recurring donation from as low as US$5 to keep our site going! Donate securely below via Stripe, Paypal, Apple Pay or Google Wallet.
44
SHARES
FacebookTwitter
SubscribeGoogleWhatsappPinterestDiggRedditStumbleuponVkWeiboPocketTumblrMailMeneameOdnoklassniki
Related ItemsHigh School Rapper. Markkim guramc greenctSwingsYang Dong-Geun
← Previous Story Fans Call CUBE “Snake” And Plan Of Forming A ‘New BEAST’ “Disrespectful” And “Low”
Next Story → Fans Spot BLACKPINK’s Lisa’s Kind Gesture Towards NCT’s Taeyong At Gaon Chart Awards