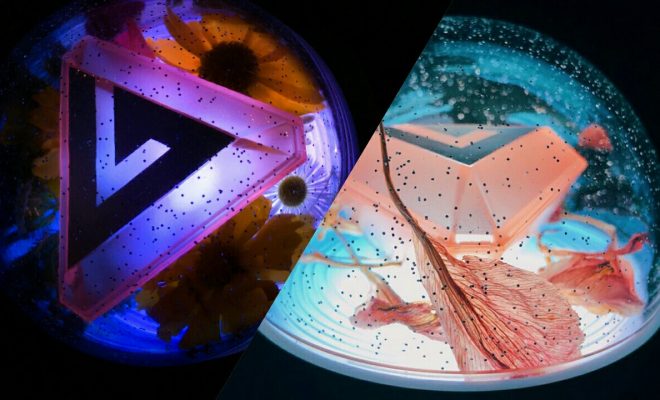 When heavens gave out creativity, SEVENTEEN’s Carats were probable wide awake and at the forefront!

Since South Korean boy group SEVENTEEN released its official lightstick, the K-Pop world has been gushing about its beauty.

It has a white body with the boy group’s name prettily written on its handle. It bores the boy group’s logo, taking the shape of a diamond. Its color perfectly combines serenity and rose quartz — the official colors of Carats. It can change colors that at times, Carats generously share their lights to other fandoms to help show support.

And so, there is no contest, Carat Bong is indeed the prettiest lightstick ever in K-Pop.

1. Carat Bong is one of the prettiest bongs in this generation.

2. Has all the colors to support other fandoms

wHAT ELSE CAN THIS BTCH DO?! pic.twitter.com/P0zjg0r1P9

But when we thought it cannot get any prettier, fans of SEVENTEEN managed to blow away the K-Pop world with their creativity and eye for everything pretty.

The self-producing fans of the self-producing idols have thought of various ways to revamp their lightsticks through dismantling the top part and adding flowers, fairy lights, stuffed toys, and even food!

Not convinced? Here are 17 times SEVENTEEN’s Carats proved their lightstick is the “Queen of Aesthetics”.

My I ; carat bong version pic.twitter.com/GzgAK7zmpc

“My I” is the collaboration track of Jun and The8 released through SEVENTEEN’s fourth extended play, A|1.

I took a gamble and opened it now my carat bong is a cherry blossom snowglobe like effect ?? #seventeen #caratbong pic.twitter.com/FXEP9Q43GT

I took out the carat bong diamond and replace it with flowers omg pic.twitter.com/KktNts52rF

#SEVENTEEN'S CARATBONG IS THE PRETTIEST THING EVER. SHE'S THE QUEEN OF AESTHETIC. Yes, I added flowers because I'm extra. pic.twitter.com/Q1x0VbnkOq

seventeeen's carat bong is literally the most beautiful lightstick to exist.

had to do it. carats have the most pretty and ethereal light stick!! #caratbong #SEVENTEEN ?? pic.twitter.com/NFAdYHDsTM

Yellow flowers because today i got joshua in yellow shirt. These bright yellow flowers represent how bright caratbong will shines along with seventeen. (Inspired from self-producing-fans) pic.twitter.com/v4J8CBqlEy

OKAY WAIT CARAT BONGS ARE ALREADY LIKE THE MOST AESTHETIC THINGS EVER AND CARATS MADE IT EVEN MORE AESTHETICALLY PLEASING WITH FLOWERS, DIAMONDS, ETC

Wow the fandom is getting hella creative

RT IF YOU THINK THESE ARE PRETTY ??? pic.twitter.com/xdr5IZhahv

So here i tried putting some baby's breath into my carat bong!!

INSPIRED BY @Hikariyukix
Thank you for inventing such an interesting way to play with carat bong! pic.twitter.com/KBnZVt1d3N

I guess my boredom led me to join the carat bong flower garden craze ???? pic.twitter.com/C4DEqRbzsR

i added in fairy lights and more flowers into the carat bong ?✨ pic.twitter.com/CxwiYAAZQm

Uhhhhh i wanted to join in on the caratbong craze but im a weeb so pic.twitter.com/1vdJetblCJ

I took two of my little sister’s diamond paperweights and put them inside of my caratbong.

Carats are so extra ? someone actually put carrots inside the caratbong ?

heres what i put inside my carat bong:

I put some accessory in my carat bong ??? pic.twitter.com/PLezAtOoQy

Pretty, isn’t it? SEVENTEEN will probably get to see this beautiful trend as the boys embarks on their concert series beginning in Seoul at the end of June.