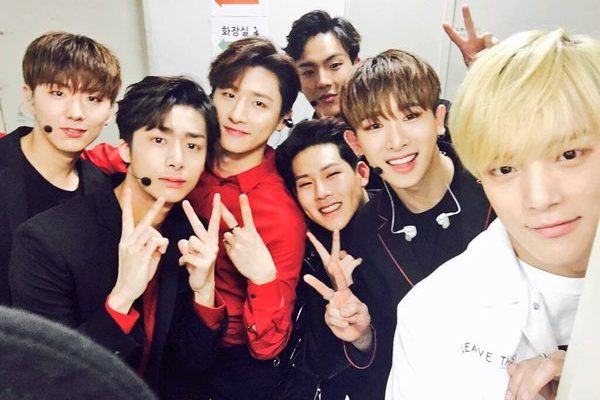 That’s not so nice of her.

Xiaxue is a famous Singapore blogger, who is known to write about critical issues in an extreme, provocative manner. Recently, she enraged K-pop fans when she tweeted about MONSTA X.

On February 24, Xiaxue happened to take the same flight with MONSTA X members. With a large crowd of fans receiving them at the airport, she naturally became curious, thus she did an online search about this K-pop group. Right after that, she tweeted out her first impression of the boys. 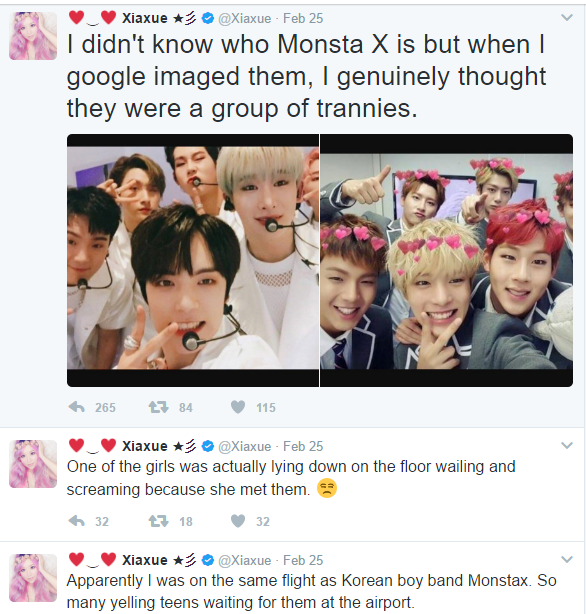 She continued tweeting that would further enrage K-pop fans.

Wtf is this I’m sure the second last dude can feel the last dude’s cock on his ass that’s why his face is like ??? #lovingit pic.twitter.com/kcUhKENbao

Are teenage girls now in love with boys who aren’t interested in them and never will be? I’m confused pic.twitter.com/oyCRGjcBdW

She also defended herself with a sarcastic remark that she was not sarcastic.

Very serious question is this a biologically born woman who is now part of a boy band?! I’m seriously asking, not trying to be sarcastic. pic.twitter.com/zRHurmyCx3

Fans accused Xia Xue of being disrespectful, which resulted in a flurry of online attacks. Xia Xue defended that when she said “MONSTA X is a group of trannies, it wasn’t in a derogatory manner”.

When I said Monsta X looks like a group of trannies, it wasn’t in a derogatory manner. How do I prove that?

However, things turned worse when she brought out the whole K-pop boy bands:

So I think your Kpop band look like girls and I personally don’t find that attractive. Get over it, it’s hardly the end of the world!

When a fan replied her with an angry tweet of BTS and EXO fans coming at her, she angered more – this time, ARMYs and EXO Ls together, although she later tweeted that she has no idea who they are.

And despite countless requests for her to delete her insensible tweets, she stated that “I’m very pleased that people are very angry I refuse to delete my tweets.”

I’m very pleased that people are very angry I refuse to delete my tweets. ??? lmao

However, she continued to defend her choice of word of explaining that “tranny can mean drag”:

I’m very pleased that people are very angry I refuse to delete my tweets. ??? lmao

She further maintained that MONSTA X members look like a bunch of girls.

Finally, Xia Xue succumbed, and apologized, but for the reason that “you are so easily butthurt”.

People are asking me to apologise. Okok I’m sorry. SORRY YOU ARE SO EASILY BUTTHURT! #sensitive #ouchmyfeelings pic.twitter.com/jMXswuzfVc

On the following day, Xia Xue continued to tweet on the same issue, even with a few Twitter polls:

Which boyband is the most effeminate?

Despite the negative publicity Xia Xue has been gathering till now, she seems unremorseful.

Has she gone overboard? How will this affect her future career, especially Singapore is one of the top countries that loves K-pop?