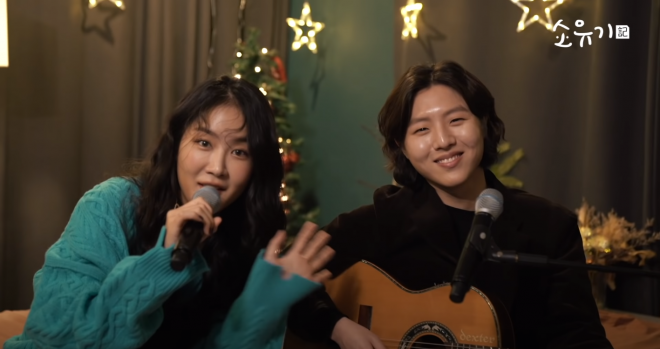 Singer Soyou, owner of the YouTube channel SOYOUGI, drew attention by announcing a special Christmas carol duet. She unveiled the news along with the three candidates whom she had to choose her singing partner.

On December 16, the singer shared the exciting project through a video uploaded on her channel. In particular, it showed Soyou meeting with the three artists to find a guest to sing the carol with her. The candidates were the group DUETTO, soloist Yu Seung Woo and Monsta X’s main vocalist, Kihyun.

The clip gave a short introduction of Soyou meeting with each one, leaving the actual reveal for December 17. The duet was uploaded on the artist’s channel at 5 PM KST, including both the chosen artist and song.

The cozy carol born from the final decision

Soyou picked Yu Seung Woo as her singing partner, who accompanied her not only with his soft vocals, but also with his guitar. The two sang “The Christmas Song”, a classic carol which the artists warmed the hearts of viewers.

In addition, the video showed the other possible songs, as well as the practice process. It also included a post-credit scene, further showcasing the synergy between the two.

Soyou’s nickname is “collaboration goddess”, as she swept the music charts with her various team-ups. Those include her work with Junggigo for “Some”, with EXO’s Baekhyun for “Rain” and many more.

The soloist opened her YouTube channel SOYOUGI in March and uses it to post different content such as travel and daily life focused videos. She is also showing great performances not only with her music work but also in the entertainment department. Her latest appearances include MBC Every1’s Yacht Expedition: The Beginning and Mnet’s CAP-TEEN.

Meanwhile, Soyou’s channel continues to draw attention with its entertaining and K-pop centered content. A new episode is released every Thursday at 5 PM KST.