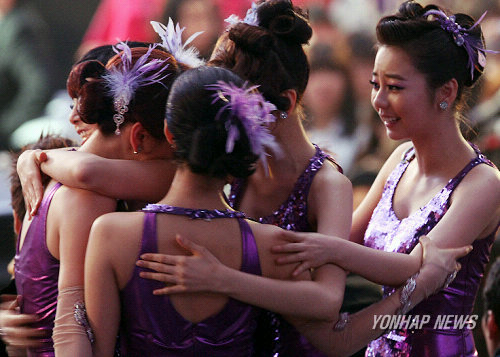 The surprise which made the Wonder Girls shed tears

Tables turned around when the Wonder Girls were performing their crowd favourite song, Nobody and the music ended abruptly. To their dismay, the Wonder Girls were confused with what they thought was a glitch. It wasn’t long until one of the Wonder Girls’ earlier song, ‘Wishing on a Star‘ began playing and the fans started to serenade the girls with a video montage being played on the big screen.

Leader Sunye was quick to react to the surprise and started to shed tears first among the five members. Maknae Sohee, was the only member who did not cry but told fans that she was ‘staying strong’. The crowd chanted ‘Cry Sohee, cry’.

Lim, who came into the group in 2010 and received much criticism for being Sunmi’s told fans that she didn’t know whether she deserved to listen to the song or not but she was touched by the planned surprise.

The Wonder Girls are currently preparing for their new track, ‘Like Money’ which will feature US artist Akon. ‘Like Money’ will be released on July 10 digitally.