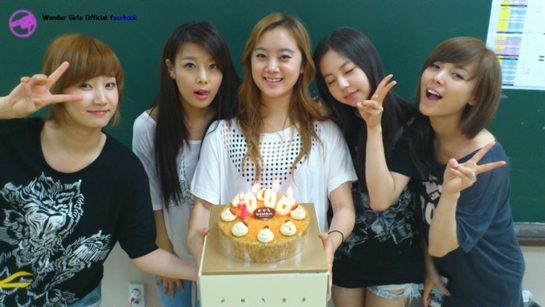 It has officially been 2000 days since the Wonder Girls made their debut unto the K-pop music scene in 2007. The girls uploaded a group photo  on Facebook and Twitter to display their celebratory cake decorated with candles that read ‘2000’. The Wonder Girls displayed their gratitude towards their fans and wrote a caption that said:

Congratulations to the Wonder Girls on their 2000 days anniversary and may they have many more anniversaries in the future!

Hellokpop, as an independent Korean entertainment news website (without influence from any agency or corporation), we need your support! If you have enjoyed our work, consider to support us with a one-time or recurring donation from as low as US$5 to keep our site going! Donate securely below via Stripe, Paypal, Apple Pay or Google Wallet.
FacebookTwitter
SubscribeGoogleWhatsappPinterestDiggRedditStumbleuponVkWeiboPocketTumblrMailMeneameOdnoklassniki
Related Items2000 daysanniversaryFacebookjyp entertainmentTwitterWonder Girls
← Previous Story JYJ’s Yoochun deactivated his twitter account
Next Story → SM Entertainment lists JYJ as members of TVXQ – possibility of a comeback?