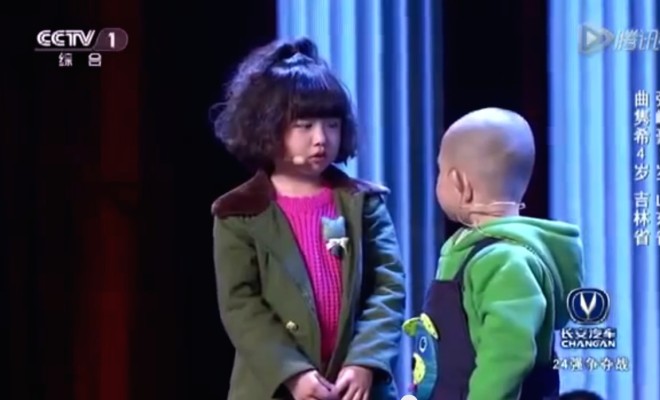 These young China’s Got Talent contestants will make you cry

China’s Got Talent contestants Zhang Junhao and Little Xixi battled it out to go to the next round, but what happens next was truly touching.

After their performances, the two little contestants were brought to the stage by the judges, where they would select only one of the two to progress to the ‘Great Hall’.

Little Xixi asked: ‘Can’t both of us go to the Great Hall? Only one person can go?’

The judges then asked the young girl whether they should choose her or her rival, Zhang Junhao.

The MC then asked Junhao who he wanted to go to the next round if only one person could go through.

The judges were so surprised and in awe by their responses, that they asked the two young contestants to decide themselves on who should go to the Great Hall.

“What did you say?” Little Xixi asked Junhao.

Little Xixi then told the MC and judges that Junhao should progress to the next round instead of her because she was older.

“I should give him the opportunity because he’s younger.”

However, it was still up to the judges to choose between the two young contestants. Junhao was eventually chosen by two of the judges.

Still Junhao was not happy that his new friend, Little Xixi wasn’t chosen to progress to the next round with him.

“Keep it up, Xixi.” He said to her before he broke into tears.

Little Xixi was given an opportunity to convince judges to use their saves and send her to the next round with Junhao.

“Isn’t Junhao sad? He’s there waiting for me.”

Xixi was immediately saved by the judges and was sent to the Great Hall.

Children have beautiful and pure hearts!