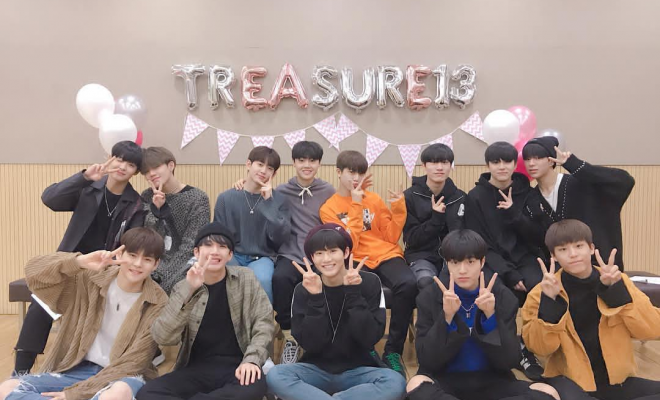 31 Things We Learned About Treasure 13 Members In 31 Minutes

In case you missed it, Treasure 13 officially opened its V Live channel!

Yes, Treasure Makers, your favorite Treasure 13 boys have launched their V Live Channel and held a special broadcast to commemorate the event.

Although the live broadcast was short, we got to know the Treasure 13 members better through their stories, enthusiastic responses, reactions, and thoughts. Join me as I list down 31 things I learned about YG Entertainment’s next generation of artists through their recent V Live broadcast.

#1 They can be awkward and lost at first.

Hyunsuk on the other hand, now contemplating how he will handle these 12 babies alone. ?? He didn't sign up for this! Lol#TREASURE13 #트레저13 pic.twitter.com/zV9ipsfx7p

#2. They are generous with reactions and the main “hype men” of their members. (I am looking closely at you, Jae Hyuk and Jun Kyu!)

We got loud “wow” and “daebak” from the boys even from the simplest things a member do. They also showered their members with generous servings of claps and responded enthusiastically and attentively to everything that was said.

Here’s the age of the Treasure 13 members, from oldest to youngest, according to the recent V Live:

Their age order based on their birthdays, from oldest to youngest:

#4 They get so happy because of a cake, while some are conflicted because they have to lose weight. Meanwhile, Bang Ye Dam loves blowing candles.

Yedam blew candles without waiting for the rest.

#6 If a match still emits smoke, eldest hyung Choi Hyun Suk will come to your rescue.

#7 They are so cute when singing a congratulatory song.

#8 They play pranks on you on your birthday!

So Jung Hwan is the lucky first victim because he is the first member to celebrate his birthday after officially becoming Treasure 13. According to Park Jeong Woo, he acted that he would leave the company as a joke. Ultimately, they ended up talking seriously and crying together.

#9 Park Jeong Woo can cry more on your birthday.

According to Choi Hyun Suk, Jeong Woo cried more than Jung Hwan during the talk.

they pranked junghwan on his birthday n said that that jeongwoo will leave the company and both of them talked seriously and cried rlly hard. hyunsuk also said that jeongwoo cried more than junghwan :((( pic.twitter.com/8ZEwMD6o5k

#10 So Jung Hwan experienced the happiest day, in his 15 years of life, during his birthday this year.

The maknae celebrated his birthday with Treasure members. The next day, he held a celebration with the Magnum members. Then, at the meeting room, they celebrated it again and talked together.

“I had fun that day. It was the happiest day in the 15 years of my life. It was the first birthday since Treasure was formed,” he said.

The members think getting a birthday post on Yang’s Instagram is cool and commended So Jung Hwan for receiving such a birthday greeting.

#14 Treasure’s dorm is haunted — witness report by Choi Hyun Suk and Yoon Jae Hyuk, refuted by Kim Jun Kyu who does not believe in ghosts.

“It feels like 10 people are living there,” Jae Hyuk said. As for Jun Kyu’s claim that there are no ghosts, his members said he is too busy sleeping to see them.

#15 Hyun Suk, Haruto, Jae Hyuk, and Jeong Woo ended up sharing a room because Jae Hyuk and Jeong Woo can’t enter theirs due to the ghosts.

#16 Asahi and Mashiho mark their territory by drawing on their beds’ ladder. Plus, they also claim to have the cleanest room.

#17 Yoshinori is not tidy — report by Ha Yoon Bin.

#18 They can experience a short dead air, but will eventually laugh it off and make loud clap noises to mask the awkwardness.

#19 Eldest hyung Hyun Suk believes he is the tallest.

#20 They set some rules for a peaceful dorm life.

magnum: jihoon and mashiho ft. hyunsuk approving of jihoon as the one nobody can defeat pic.twitter.com/9RVT52yopG

#23 Haruto and Kim Jun Kyu are hard to wake up. (Jun Kyu, once again, disagreed.)

jaehyuk: who takes most care of others just as a mother? the one who's likes a mom

treasures: hyunsuk hyung ~ he is like a mother, as well as a father.

— hyunsuk really is the single parent of 12 kids ㅠㅠ how can anyone not love and appreciate him? pic.twitter.com/WKoQgLYWKZ

#25 Haruto admits taking the longest to get ready in the morning.

#27 Park Ji Hoon and Park Jeong Woo want to hold a V Live while in Hongdae and show fans their adventures.

#30 They are busy preparing “many things” but promised to communicate and interact more with fans through various contents and stories.

#31 They can end the V Live broadcast with a “hello” instead of a “goodbye”.

magnum's leader jihoon leading treasure 13 but thirteen means even saying goodbye will end up in a mess pic.twitter.com/rKKaP38ONa

they were supposed to say 'good bye' but accidentally said 'hello' lmao kids. then jeongwoo literally said 'hello' while waving to camera and the others follow him. they burst into laughhhabagsvs CRACKHEADSSV#TREASURE13 pic.twitter.com/CTGy7nYzTR