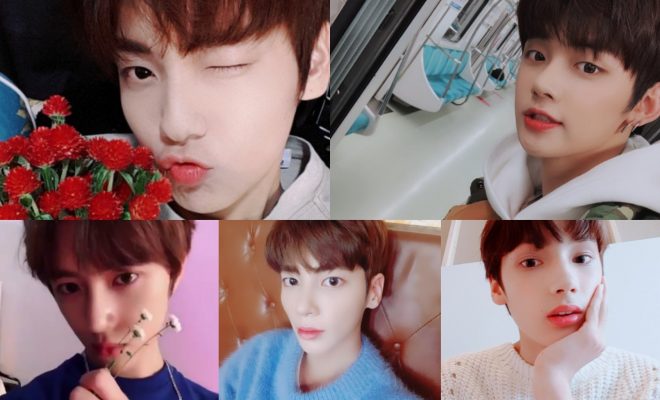 Go ahead and send your well-wishes for TXT via Twitter right now.

Along with the formal introduction as a group through their first group photo and introduction film, the members of TXT also sent their greetings to fans via official Twitter account @TXT_members.

While @TXT_bighit contains official updates and activities of the boy group, @TXT_members will feature personal updates and tweets of the members.

It follows a similar format to the boys’ senior group BTS, who uses @BTS_twt for the members’ personal tweets, while @BTS_bighit features official updates usually from Big Hit Entertainment.

To commemorate the opening of the account, the members posted their greetings to fans, along with selfies.

Soobin kicked off the tweets, expressing his desire to communicate with fans as soon as possible through the social networking site.

He also thanked the public for the favorable responses to their upcoming debut, and promised to work hard to show good stages in the future. He ended his message with “Let’s meet soon.”

In his tweet, Yeonjun expressed his gratitude for the interest towards TXT. He asked fans to wait a little longer and to look forward to the good things which the boy group has in store in the future.

Beomgyu posted a video next, together with his greetings, saying he wanted to talk to fans as soon as possible, and so he came to Twitter to post.

Taehyun also relayed his excitement to greet fans via @TXT_members. “Please give lots of love to TXT,” he wrote.

Huening Kai also sent his greetings to fans, and promised to communicate and show a good image in the future.

Hellokpop, as an independent Korean entertainment news website (without influence from any agency or corporation), we need your support! If you have enjoyed our work, consider to support us with a one-time or recurring donation from as low as US$5 to keep our site going! Donate securely below via Stripe, Paypal, Apple Pay or Google Wallet.
FacebookTwitter
SubscribeGoogleWhatsappPinterestDiggRedditStumbleuponVkWeiboPocketTumblrMailMeneameOdnoklassniki
Related ItemsTXT
← Previous Story TXT Members Come Together In First Group Photo And Introduction Film
Next Story → Ong Seong Wu To Kick Off His First Solo Fan Meeting Tour In Thailand