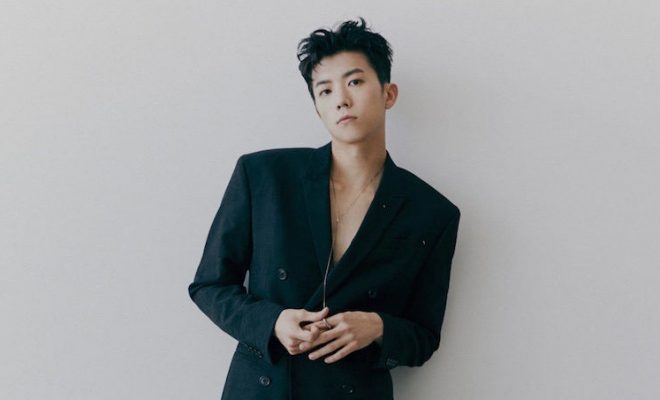 By Yann | May 22, 2020
FacebookTwitter
SubscribeGoogleWhatsappPinterestDiggRedditStumbleuponVkWeiboPocketTumblrMailMeneameOdnoklassniki

2PM’s Wooyoung reflected on how living a busy life as an idol had shaped him as a person.

2PM’s Wooyoung proved his wisdom and maturity in his insightful interview which accompanied his latest photoshoot with GQ Korea. Showing his charms in both fancy and casual wear, the singer also expressed his inner feelings through his words. 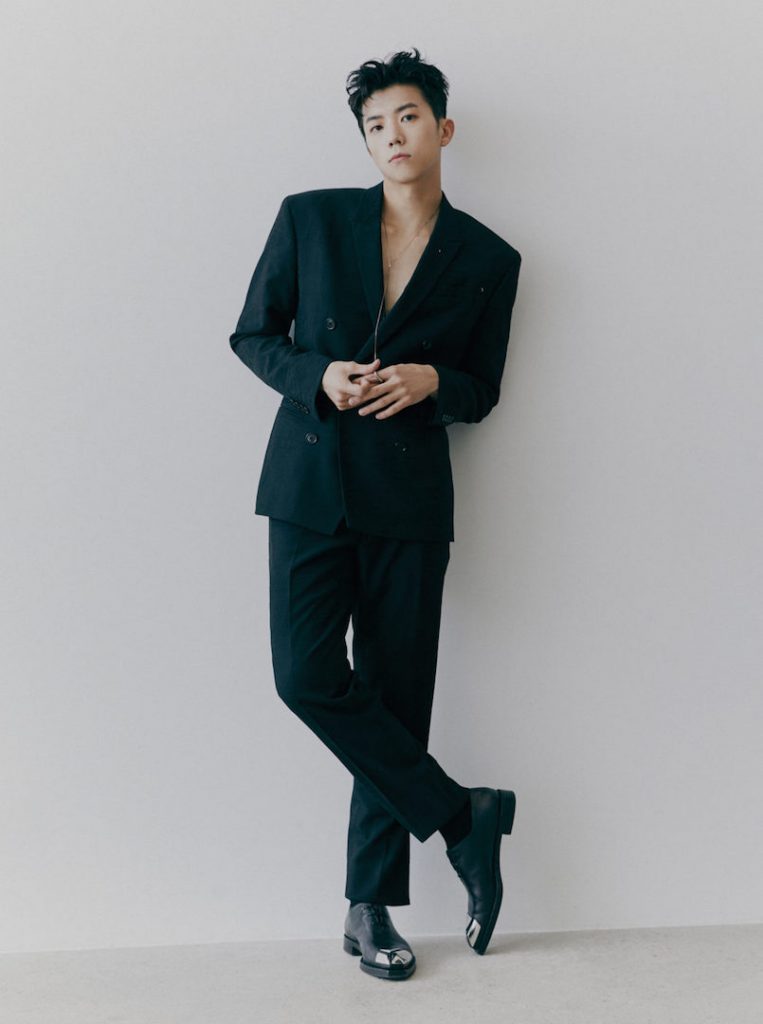 Coming back recently from the military, the 2PM member noted the one thing which didn’t change with him from before and after his mandatory service.

“My face didn’t change. I’m actually amazed and I didn’t know I’d be able to shoot a pictorial so soon after I came back from the army,” he playfully shared.

Taking on a serious note, Wooyoung talked about the realizations and thoughts that he had while fulfilling his service—which, for most idols, serves as a time to reflect quietly on their hectic lives.

“My head shook when I took a break [from the entertainment industry] while serving in the army. “What do we do from now on? How should I live?” All kinds of thoughts came to my mind. I wrote down my worries and thoughts so that I wouldn’t waste that time. There were a lot of embarrassing things at first, but it gradually got better. In addition to my future plans, I looked back on my relationships and ways I’ve lived. I thought well about how I lived so that I won’t make any same mistakes,” the singer confessed.

Wooyoung also shared how he formed insights with the help of the people around him while he was carrying out his service.

“There are a lot of young people in the army who are younger than me, and when I ask them about their concerns, they usually say, “You’ve achieved everything, so you don’t know how we feel.” We may have had different starting lines, but our fears of a new start are the same. To be honest, I was more afraid back then when I was 17 or 20 years old as I started chasing my dream.”

“No matter how you spent your teens or twenties, I think you’re always given a chance to be better. You can say you’ve matured, and you can also look back on your past experiences and mistakes and become a solid and better person than before. Add a little bit of the spirit that you had in your twenties and you’ll love it,” 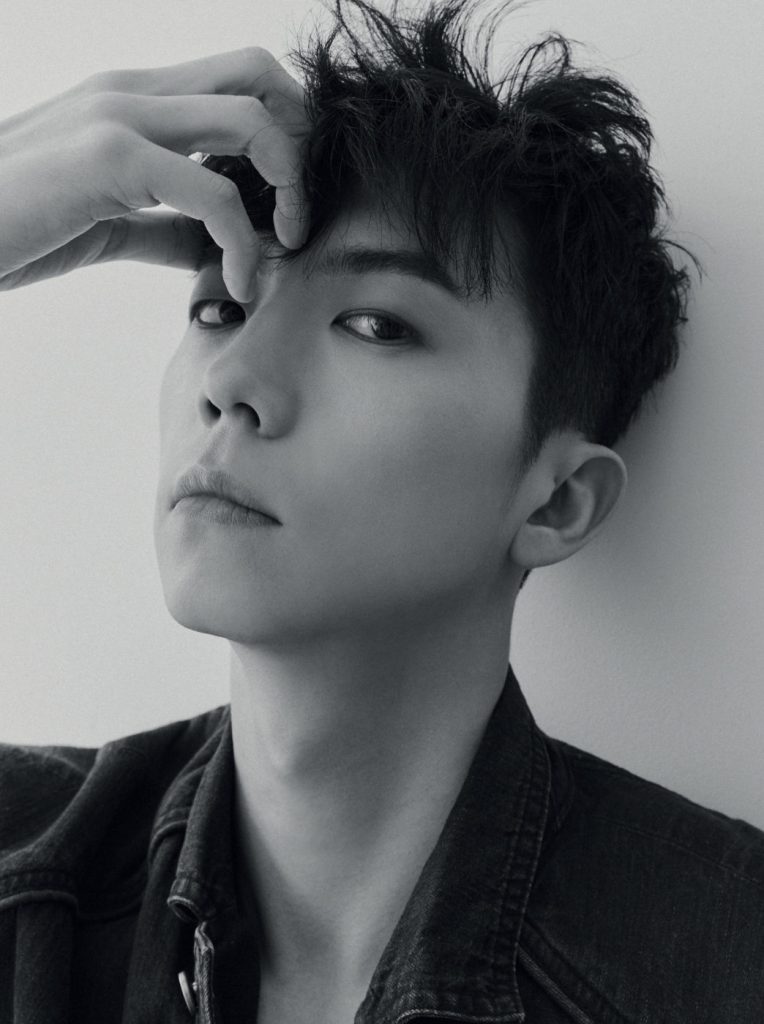 Remembering his twenties as Wooyoung

When asked what he was like in his twenties, Wooyoung simply said that he was busy and in a hurry to fill that period of his life up.

“My twenties can be hugely divided into the first and second half, starting at the age of 25. I’ve been working really hard since I debuted. At that time, I used the term ‘murder schedule’ a lot, but it wasn’t wrong. I’m grateful for the hectic work, because when would I ever live like that?” he also said.

However, the singer also noted, “I gained huge popularity for my efforts and made money. But when I turned 25, I was confused. I thought that I wasn’t living my life. I thought about quitting and going back to Busan, my hometown.”

Thankfully, he didn’t put his thoughts of quitting the industry into action. “There’s only one thing that proves my existence and gives me determination, and it’s “I’m a member of 2PM. Don’t turn back on 2PM.” The meaning of “Let’s work hard” has changed since then,” he said.

Noting his goals, Wooyoung also shared, “I wanted to play hard, meet a lot of people, learn painting, and many other things without stepping on others. I wanted to feel and experience as much as I could to awaken my inner senses. I’ve been living like crazy.”

As of the moment, the singer also shared what he is working hard on. “I’m improving my household skills. I’m going to do laundry, cook, and do it alone without any help,” Wooyoung said, delivering an unexpected answer. 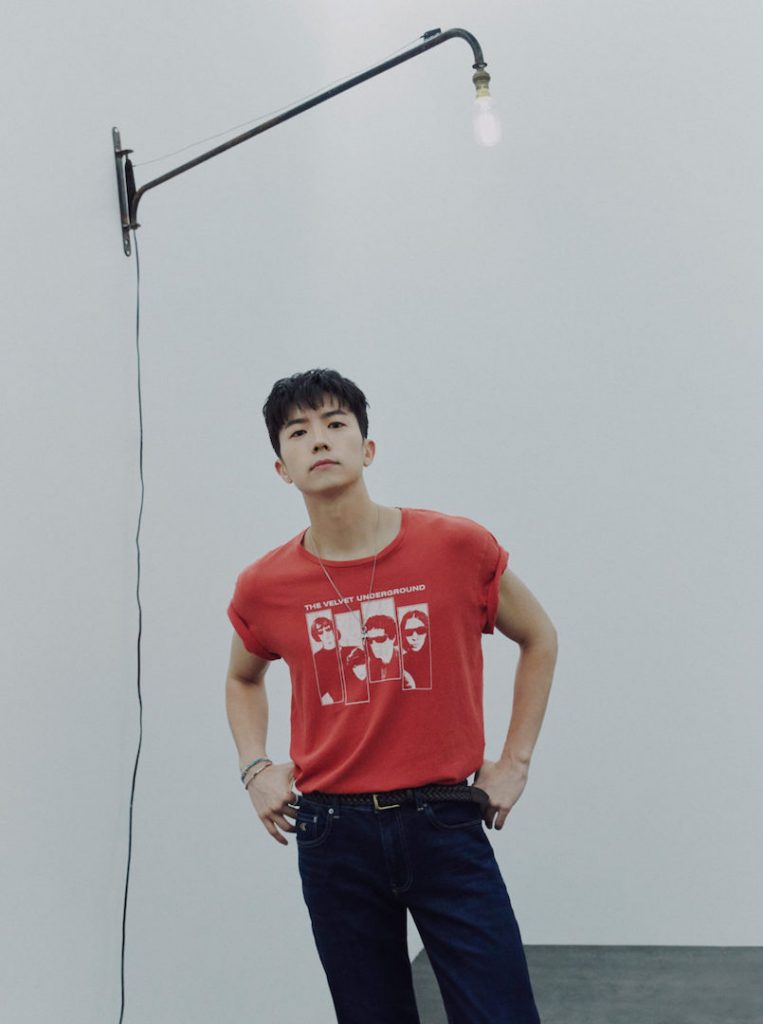 The Resurgence of 2PM’s popularity

It has been five years since his group’s hit song “My House” was released, but the song suddenly shot up and stole so many people’s hearts recently—to which Wooyoung reacted to.

“I’m so grateful. That’s what I think. It’s not like 2PM didn’t do anything to regain our popularity. At first, we were just men in our early twenties who showed the most difficult stage they could do realistically. We danced, sang, and did acrobatic performances. I sang a straightforward love song that exuded energy,” he began recounting.

“Since then, we started losing some energy and made sad love songs with our eyes talking about falling in love. And then we got to “My House”. In a natural way, it was as if a man has become a mature and wonderful lover after being a child. I saw a comment before that said, “I’m sorry, I’m a fan now” and I’m rather thankful that people are recognizing what 2PM has been doing,” the singer shared proudly.

With it being 13 years after their debut already, Wooyoung talked about how it felt to have people who just started to become fans of 2PM.

“Of course, that can happen. The trend and flow are very fast. The competition is fierce, so you’ll have to make a lot of effort to appeal to people. But all of a sudden, we re-emerged through “My House” during our hiatus, and I think it’s a miracle,” he admitted.

The singer was then asked: If he could choose a song other than “My House” to perform once again, what would it be?

“I’d like to sing “Without U” with all my might. It was released 10 years ago and I was in charge of the “crying out loud” part, but my vocal cords weren’t in a good condition then, so I lip-synced that part. It’s a shame that I didn’t sing it properly on stage,” he confessed.

With the recognition of their skills and their position on top in the Korean music industry, Wooyoung shared what he thinks 2PM is at the moment.

“Well, I can’t think of anything other than the words ‘Korean Idol’. The journey itself was not smooth, but I feel proud of it,” he humbly said. 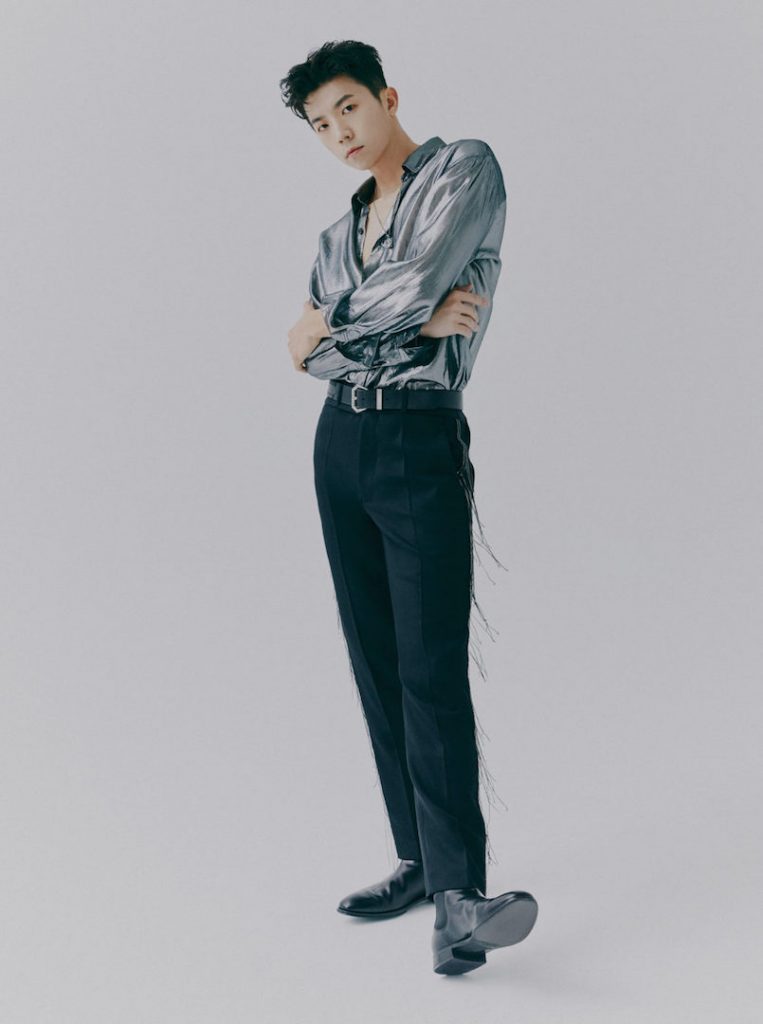 In relation to their fandom’s name Hottest, the 2PM member talked about what he viewed as his “hottest” moment.

“In 2013, we performed in Germany to celebrate the 130th anniversary of diplomatic relations between Korea and Germany. I saw senior Lee Mi Ja and I was surprised by her rehearsal performance. It’s amazing and lively. I myself can feel that I’m still trying hard to sing well, but all I can do is say, ‘Jang Wooyoung, get it together and work hard’,” he said.

Jang Wooyoung is also known for being the type of person who wants to learn everything in person.

“This was when I was having my puberty during my twenties. I was comforted by the documentary of Choi Baek Ho, but I couldn’t get rid of all my frustrations. So I got his number and called him because I wanted to know how he’s been doing music for a long time. When I first met him, he told me, ‘It will get better as I get older. Just like how the songs sung in my 40s were more beautiful than those in my 30s, they’re heading toward perfection.’ As soon as I heard that, I felt like I was hit hard,” the idol reminisced. 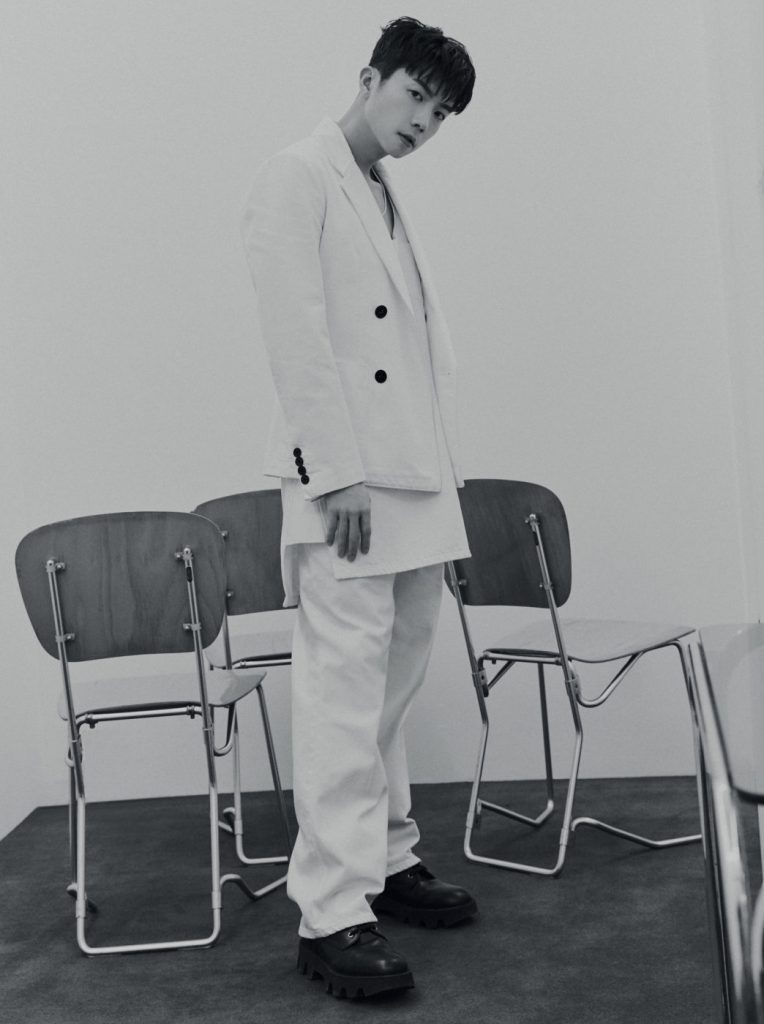 Just like how he received advice before, Wooyoung himself offered his words for those who find themselves in the same situation as him before.

“When I passed the audition at JYP, I asked my sister who cried with me if I should give up. I really hope they don’t suffer like me. I had a hard time in both my body and mind, but I’ve changed my mind now. If you are desperate for your dream and confident enough to endure a fight with yourself, try it. You may be exhausted, however, so I’d like to tell you to think about it wisely,” he said.

The idol also offered a bit of insight that he learned about love through his personal experiences.

“When I was dating, I didn’t measure or calculate the relationship with my head. I liked her so much without noting what was going on around me, and I was in a lot of pain when we broke up. I regretted it then and although I knew that it wasn’t a good way to date, I couldn’t help it. But, that experience made me who I am now. That’s why I don’t regret it anymore,” he said.

When asked about how important love is in his life, Wooyoung shared a thoughtful answer.

“If a person is number one, love is number zero. It’s a vague concept, and I don’t know if I dare to express love properly, but I can feel love through people,” he said. 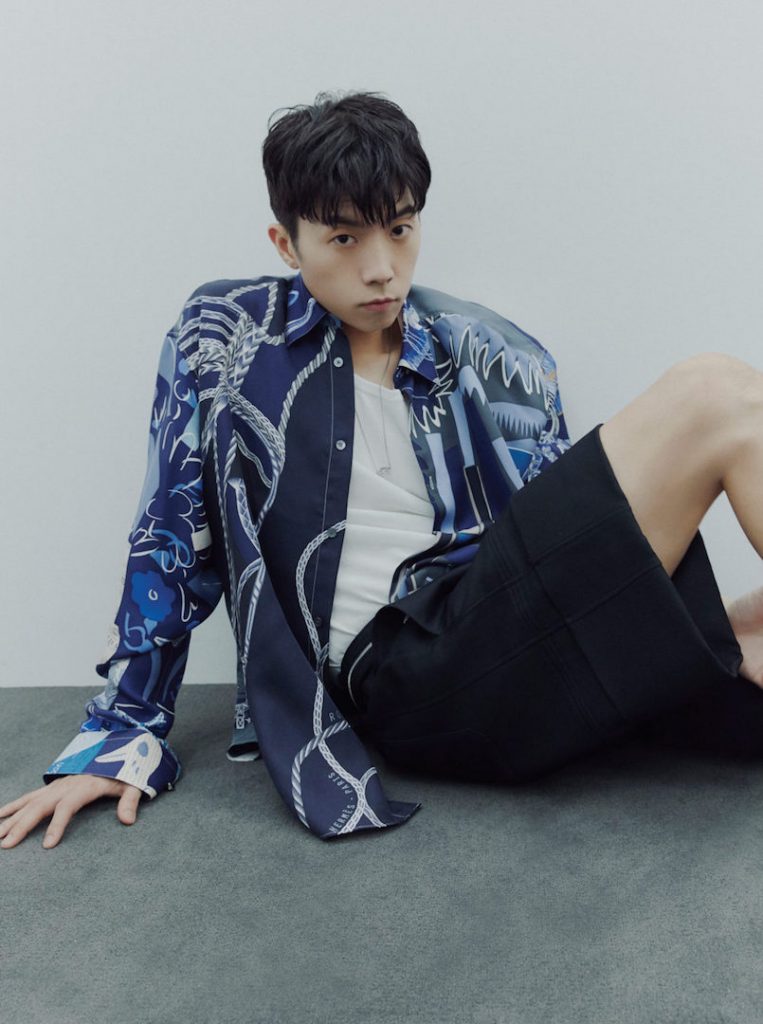 Hellokpop, as an independent Korean entertainment news website (without influence from any agency or corporation), we need your support! If you have enjoyed our work, consider to support us with a one-time or recurring donation from as low as US$5 to keep our site going! Donate securely below via Stripe, Paypal, Apple Pay or Google Wallet.
FacebookTwitter
SubscribeGoogleWhatsappPinterestDiggRedditStumbleuponVkWeiboPocketTumblrMailMeneameOdnoklassniki
Related Items2pm2PM 우영Wooyoung장우영
← Previous Story VIXX’s Ken Talks About His Solo Album, Goals, Military Enlistment And Love For His Adoring Fans
Next Story → Suzy Channels French Finesse In Her Dior Photoshoot For Vogue Magazine