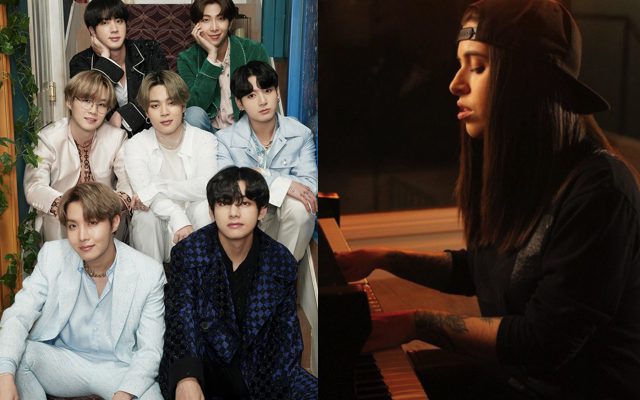 What do you get when you bring BTS and the world’s greatest songwriters and producers together? An astronomical collision of stars, of course!

The Hallyu wave of magnetic music and aesthetic novelties has been going strong since the early ’90s. With the otherworldly flair and enchanting finesse that K-Pop stars have been bringing to the international platform, the music industry has been immersed in a cultural reset.

Although the Korean wave has long been capturing hearts, there is one group in particular that has braved the waters and turned it into a tidal wave; BTS. 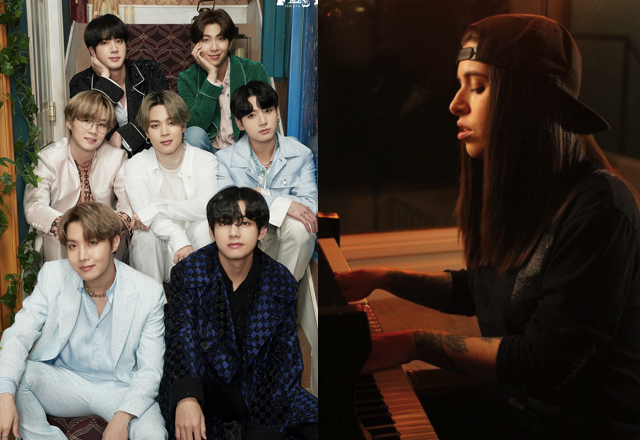 The group composed of Jin, V, RM, Jungkook, Suga, Jimin, and J-Hope has shattered barriers with their electrifying X-factor, massive talent, and phenomenal songs that have the power to both rivet you and inspire you into action. One of BTS’ defining elements is their music that can effectively draw your emotions to the surface. By addressing important facets and spreading uplifting messages through their sound, Bangtan Sonyeondan is magic.

ARMYs already know that the members often write their own music, but it takes more than one piece of the puzzle to create the full picture. Moreover, behind every successful music icon stands a team to help them shine.

If you’ve been wondering how some of BTS’ biggest hits came to life, you can thank the boys and their stellar team of songwriters, including Candace Sosa.

Once upon a time, Candace Sosa’s collaboration with Big Hit Entertainment started with Jungkook’s solo track, “Euphoria”, and soon after BTS fans lived happily ever after with one hit song after the other.

Clad in her iconic snapback and occasionally joined by her adorable cat, Fireball, Hellokpop got the chance to chat with this hitmaker on the rise.

At the young age of 25, Los Angeles based songwriter and producer, Candace Sosa, has already written a myriad of songs for Korean acts, such as BTS, TXT, WayV, and OnlyOneOf.  While her repertoire continues to grow exponentially, she has even launched her own artist project with her enrapturing debut single, “Slave”.

With “Euphoria” (originally titled “Time To Kill”) being the songwriter’s debut placement in the music industry, seeing the song performed live was much like a dream come true for her.

“Seeing them perform that live was like insane. I mean seeing all these lights and everybody singing along, it was so hard to hold back tears. I can’t even believe this is happening right now.” She shared with a smile.

“Euphoria’s” spellbinding melody combined with Jungkook’s serene vocals was nothing short of a masterpiece.

After the catalyst, Candace worked on “Magic Shop”, “Love Maze”, “I’m Fine”, “Love Myself”, Mikrokosmos”, “Moon”, and “We Are Bulletproof: The Eternal”.

Before delving into the rest of the interview, Candace Sosa was asked one crucial question that ARMYs would definitely be curious about. Who is her bias?

“I love Jungkook, because he does ‘Euphoria’ and his voice is insane.” she started. “But I do have a slight thing for Jimin, so I would have to go with Jimin on that one.”

When asked who her bias wrecker is, Candace answered, “I feel like…V. That’s my dude. He’s just so cute. I love his hair. I don’t know, he’s super cute.”

We feel you, Candace, we feel you. It’s hard to pick a bias from this group when each member is just so cosmically amazing. ARMY, breathe if you agree.

To the Moon and Back and the Road to the Eternal

The prodigious music maker was also a key piece in “Map of the Soul: 7”, as she co-wrote “Moon” and “We Are Bulletproof: The Eternal”.

Humming the pre-hook of the song, Candace reminisced her days in the studio with DJ Swivel when they were still putting the track together. “I remember coming up with that in the studio with Swivel, and I was like ‘dude, we got it’. This is it. I know they’re gonna love this. We got one. We’re good. We’re gonna be on the next album.” She laughed cheerfully.

“I was so sure of it based on that specific melody, and we got it, and I was so happy. And that’s Jin’s solo song too, and that one’s doing really well right now too.”

With “Moon” reigning at the iTunes’ number 1 spot in over 60 countries, we can assure Candace that fans were absolutely happy about it as well.

“I just got chills thinking about it.” she joked. “Now, I’m thinking about it! Like, yeah, what are they gonna do? Like going onto a platform to a moon or something. I have no idea. The possibilities are endless for them.”

“I mean Jungkook was flying. I mean, we’ll see. Maybe Jin will be like a little superhero flying to the moon, and then on the moon, it says ‘Nasa’.” She continued while she posed like Superman, showcasing her sense of humor.

When you think of “We Are Bulletproof: The Eternal”, you will most likely find yourself in a puddle of your own tears when you think of the seven years that you’ve spent with BTS, so far. The song is both a tribute to BTS’ glow up over the years and a big heartwarming thank you to ARMY for walking with them on their journey.

One of the main reasons people love this hit is because it sums up all the emotion-evoking melodies and lyrics that the seven-strong has brought to the table and speaks volumes of what BTS truly stands for. Moreover, it has the power to remind you of everything you have achieved in your life within those 7 years and how you too have grown up in many ways.

If you bawled your eyes out when you first listened to this mellifluous work of art, you can both thank and blame Candace Sosa and DJ Swivel for the heartwrenching bridge.

A Star in the Making

Aside from being a genius in the songwriting department, Candace has been working on her own artist project as well. With her recent tour with Armin Van Buuren and the release of her solo single, “Slave”, the only way to go is up. Nearing 900,000 views on Youtube, “Slave” has already worked its way into people’s hearts (and their playlists too!).

When asked which one of her songs she would choose to introduce herself to someone who hasn’t heard of her music yet, she went into deep thought before answering, “I have a song that I just did a music video for. It’s for my artist project and it’s called ‘Trapped’, and it’s one of the deepest songs that I’ve ever written. I mean it’s not the happiest song. It’s like dark, but it has a vibe to it that you can still move your body to it, but it’s also sad. I’m a really emotional person, so I think to represent myself best for who I am and what I’ve gone through, I think ‘Trapped’ would be a way to introduce my music to somebody.”

When asked about who she would love to perform with among the BTS members, Candace replied, “You know how there was a stripped-down version of ‘Euphoria’? Originally, Swivel and I pitched that song with my voice doing the second verse in English and then us combining the last hook and everything. That, honestly, it would be a dream come true if me and Jungkook could do something in the future. I think our voices actually really go well together.”

“Can you imagine?” She gushed happily. “That would be insane, and in front of that many people?”

We’re already rooting for a Candace x Jungkook collaboration in the future!

A Message for the Readers 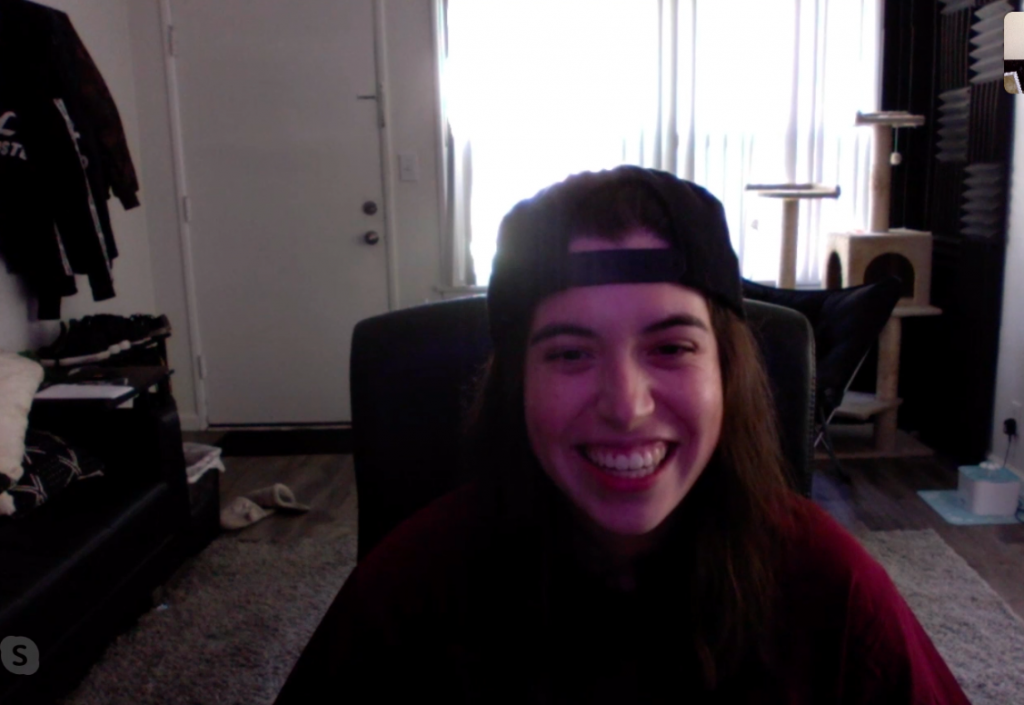 Before the interview drew to a close, Candace shared some words of wisdom that could give anyone a jolt of inspiration.

The Future Is Bright 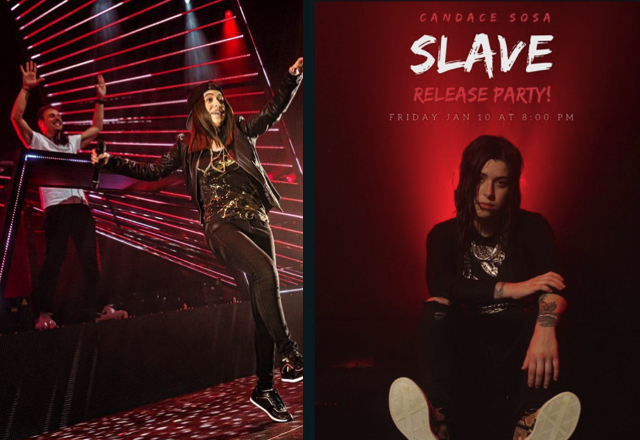 After launching “Slave”, Candace is slated to release “Trapped” in August. She described the song as an extension of her first single, which traverses the battle against anxiety and the journey to breaking free from your own mind’s chains.

Additionally, she may have another K-Pop project in the works, so Hallyu fans definitely have some more content to look forward to.

Aside from the dreams that she is already living, it’s another one of Candace’s dreams to be featured on The Tonight Show Starring Jimmy Fallon. Talking about how thrilled she was when BTS performed “I’m Fine” on the show, she expressed, “Being a songwriter and an artist, I just want people to know my music, like, I just wanna be on a talk show with Jimmy Fallon.”

Calling Jimmy Fallon, this is one star in the making that you should definitely consider guesting on your show!

In short, Candace Sosa is a brilliant songwriter/producer, an up-and-coming artist with undeniable talent, and a girl who knows how to rock a snapback like the best of them.

We’re excited to see what other magic Candace Sosa will create in the future.