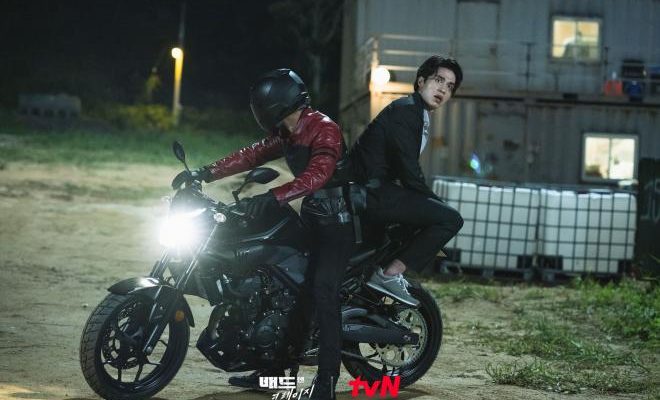 iQiyi is set to close 2021 on a high with its latest heavyweight Original Korean drama series Bad and Crazy, starring Lee Dong Wook (Tale of the Nine-Tailed, Guardian: The Lonely and Great God) and Wi Ha Jun (Squid Game, 18 Again, Something in the Rain), and by the production team behind The Uncanny Counter.

Making its debut today (Nov 25th) is its latest action-packed trailer spotlighting the leads Lee Dong Wook and Wi Ha Jun on a speeding, wild motorcycle ride, in intense fight scenes, with compelling chemistry between them. The interactions and ‘bromance’ of Lee and Wi personify the “Bad” and “Crazy” will pique viewers’ curiosity as to who they really are in the series.

In the 30-second sneak peek, Lee Dong Wook is in the role of charming rogue police inspector Ryu Su Yeol who is left helpless in his encounters with the crazy motorcycle rider played by Wi Ha Jun. Donning a helmet, Wi rides with aplomb on the streets to leave pillion rider Lee Dong Wook screaming.

When they meet again, Lee Dong Wook is in a bathrobe in a back alley, and Wi lifts his ride over Lee in a shocking and dangerous move. The seemingly insane Wi Ha Jun wheelies to shatter a window of the car that Lee Dong Wook is in, to leave him in utter fear.

The trailer also suggests the Lee-Wi relationship is not one-sided. While they can’t seem to stand each other, Lee and Wi actually end up rocking a seesaw together. “Can we respect each other’s privacy?” asks Lee Dong Wook in a scene that reveals their inner child to have viewers wonder about their relationship. However, in moments of danger, they know they have to work together and count on each other. As the assertion “Only you and I can do this!” and the question “Us both?” suggest, the two share an unshakeable ‘bromance’ brotherly tie.

Bad and Crazy is a heroic drama that follows capable but bad cop Ryu Su Yeol regaining his humanity after meeting the righteous but crazy ‘K’. The iQiyi Original K-series is set to premiere on December 17, with new episodes simulcasting with Korea on Fridays and Saturdays at 9:50pm (SGT), globally across 191 territories on the iQiyi International app and www.iQ.com.