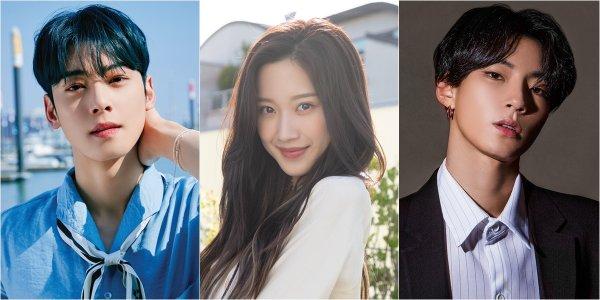 tvN has confirmed the main cast of the upcoming drama adaptation of the hit webtoon True Beauty.

Moon Ga Young, Cha Eun Woo and Hwang In Yeop are confirmed as the lead stars of the romantic comedy drama True Beauty.

Based on a popular webtoon of the same name, True Beauty tells the story of Lim Joo Kyung, a girl  who lacks confidence with her appearance and uses makeup to boost her self-esteem. She meets Su Ho, a boy with hidden scars, and they share secrets with each other.

Moon Ga Young will portray the role of Lim Joo Kyung, the goddess of makeover who doesn’t want to be caught without any makeup on. Lim Joo Kyung is a bright and optimistic high school girl who builds her self-esteem through the power of makeup.

The actress recently showed off her solid acting skills and lovely charms through her previous drama Find Me In Your Memory.

Cha Eun Woo portrays Lee Su Ho, a perfect and ideal guy blessed with striking looks, good grades, and basketball skills. However, he does not give attention to others and is not drawn to anyone.

Hwang In Yeop will play the role of Han Seo Jun whose visuals is on par with Lee Su Ho. He has a fierce appearance and perfect physique, but contrary to that, he is actually a warm and caring person.

Power rookie actor Hwang In Yeop drew the attention of the public through his role in KBS’ The Tale of Nokdu. He impressed viewers with his sharp gaze and excellent martial arts skills as Park Dan Ho.

The production team said, ” We confirmed Moon Ga Young, Cha Eun Woo and Hwang In Yeop as lead casts. The three actors who bears resemblance to the main characters will give of irreplaceable charms and refreshing synergy. We will return with a lovely romantic comedy series within the second half of this year. Please look forward to True Beauty.”

The drama will wrap up its casting process and will begin filming. It is scheduled to air in the second half of 2020.

Source and photo from Sports Donga