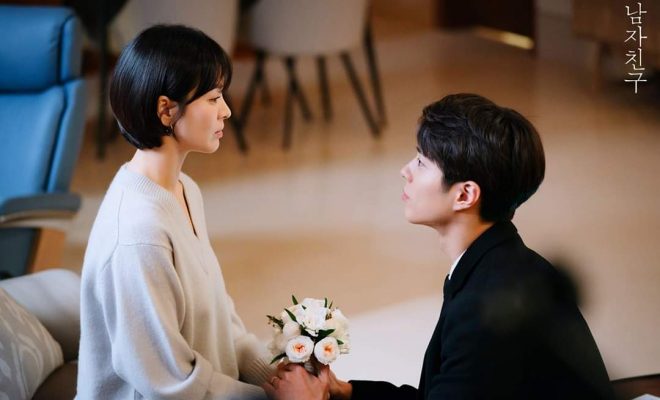 Closing in the contemplative love story of Encounter, reality struck really hard for the couple who had to let go of each other’s hand.

The hero of the story owned the penultimate episode of Encounter as he confronts the bitter reality that not all mutual love can survive the odds especially family issues. 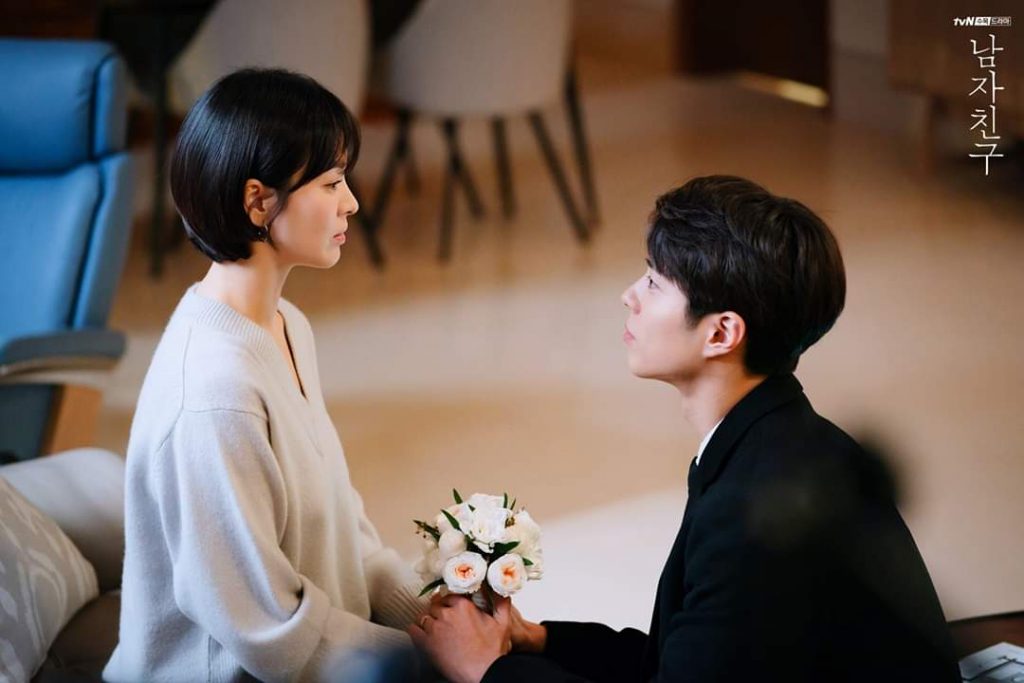 With the amount of tears Park Bo Gum shared in this episode, I strongly think the petition to tone down meddlesome mother conflict in romance melodramas should be initiated.

After hanging out at a book store, Jin Hyuk and Soo Hyun head to dine out. Sensing the right moment to voice out her intention for them to break up, Jin Hyuk presents the camera bag gift he earnestly worked on after his work shift. Jin Hyuk’s gift halts Soo Hyun with her intended plan.

The next day, the media is having a field day as Congressman Cha voluntarily goes to the Prosecutor’s office to admit to the acts of corruption.

Knowing the emotional weight of Congressman Cha’s situation put on his girlfriend, Jin Hyuk patiently waits for her in the parking lot to drive her home. Her decision to go for a tea time, wins even when Jin Hyuk insists she should rest.

In a sad voice, Soo Hyun tells Jin Hyuk she wants to break up.

Anguished Jin Hyuk tries to hold on to her, but to no avail. 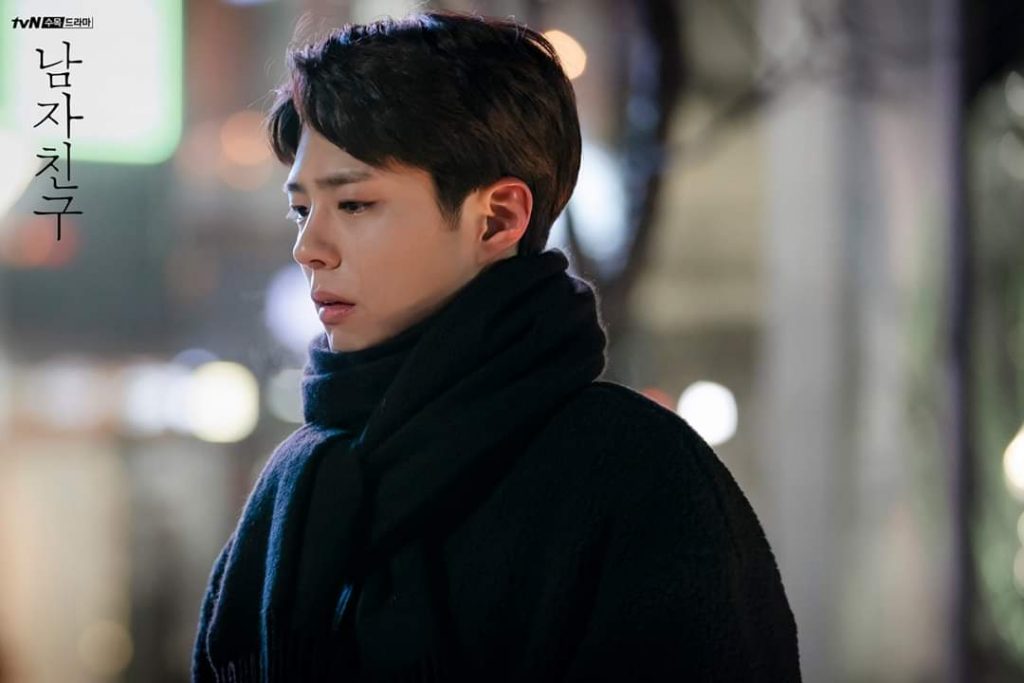 Breakup fever hits Jin Hyuk hard as he goes to his daily routine in a zombie mode pretending everything is okay.

His gaunt face earns him a free pass to go home and rest with his mother, realizing that her request was already granted by Soo Hyun.

After earning some rest, Jin Hyuk meets his friends at Dae Chan’s restaurant. Jin Hyuk omma confesses to her husband of what she did, and is castigated for meddling on his son’s business; unaware that Jin Hyuk goes home early and accidentally eavesdrops on their conversation.

Rushing to where Soo Hyun is, Jin Hyuk barges in her office room to embrace her for having to go through an ordeal because of his mother.

But Soo Hyun still pushes him away, resigned to her initial decision that their love for each other cannot withstand the odds.

Why did you breakup?

Mr. Nam meets Soo Hyun to report about his father’s well-being. But her driver questions her decision on ending her relationship with Jin Hyuk.

She further learns how his father met with Jin Hyuk to make him promise on protecting his daughter. Remembering Jin Hyuk’s pleas when she broke up with him finally makes sense, but Soo Hyun remains expressionless on what she truly feels. 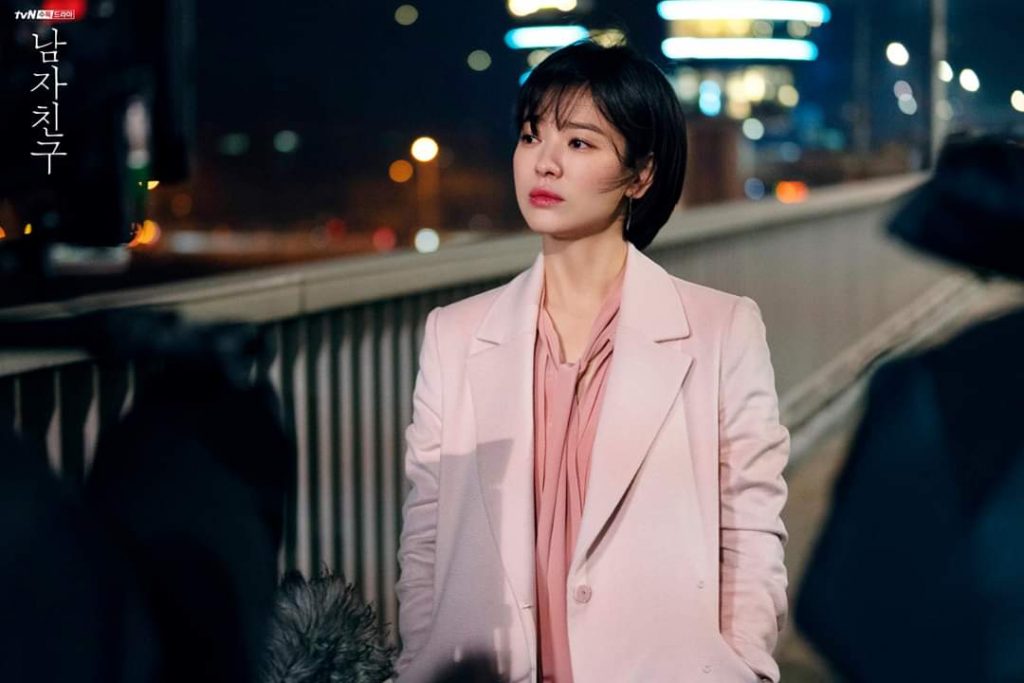 Jin Hyuk’s team manager deduces something off between Jin Hyuk and Soo Hyun as she learns from her boss of her decision to oversee the Cuba hotel project.

She gives Jin Hyuk that tip which aggravates his already despondent mood. On a pensive note thinking of what he will write on his resignation letter, Jin Hyuk suddenly gets up and goes to Soo Hyun’s office.

I really really feel so sad about Jin Hyuk in this episode, so much so that I want to get him out of the television screen to hug him.

On that note, I am disappointed on how Soo Hyun’s character has deflated in her goal of making the most of her life by choosing to empathize with other people’s woes again.

Please push for the eradication of “meddling mother” conflict in Korean romance dramas, especially if they will attack on the waning moments of the series.

Let’s brace on the finale happening tonight. Will “time” create a second-chance encounter for Jin Hyuk and Soo Hyun?