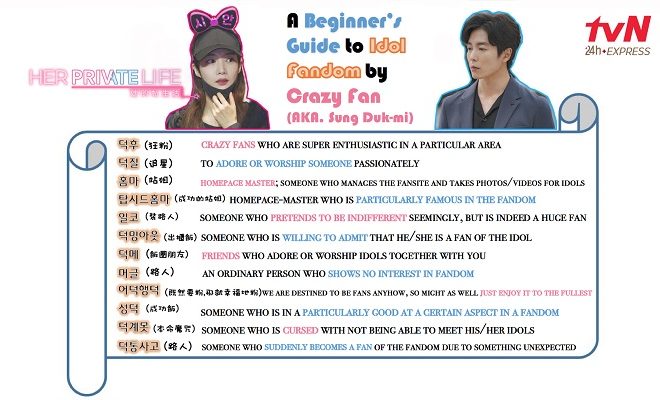 Get blessed with this very helpful info before going into Her Private Life.

tvN Asia’s 24-hour express drama Her Private Life, starring Kim Jae Wook and Park Min Young, will premiere on tvN in Asia on 11 April (Every Thursday and Friday) at 21:45 (GMT+8) in Singapore and Malaysia, and at 20:45 (GMT+7) in Indonesia.

The production team has released a glossary, which is an exclusive beginners’ guide, fandom 101. There are lots of new coinages that Korean fans encounter every year, which represent the language of the new generation.

The glossary is said to be a helpful guide for the newly joined fanboy Ryan Gold (Kim Jae Wook), as he shows no interest in fandom previously. This mysterious and interesting glossary is prepared by Sung Duk-mi (Park Min Young), Ryan’s subordinate at Cheum Museum of Art, who is secretly a professional fangirl of Cha Shi-ahn (Jung Jae Won).

Those newly coined phrases in the list perfectly illustrate the modern way of communication among fans. For instance, “덕후 (duk-hoo)”, refers to crazy fans; while its antonym “머글 (mo-guel)”, means some who shows no interest to a fandom. Her Private Life is not only a drama following the intriguing romance between characters, but also describes the evolution of fandom in great details. 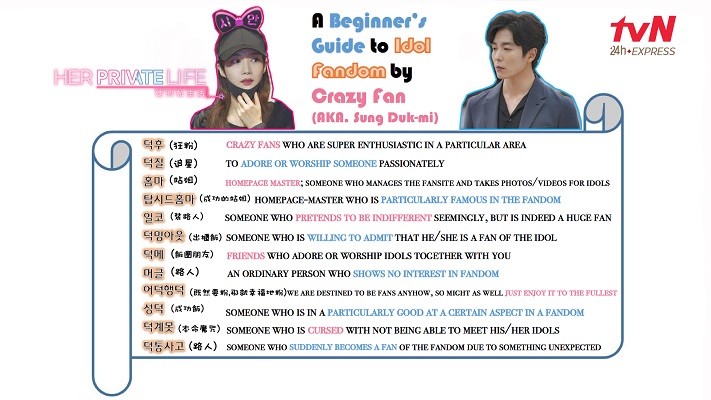 Apart from the exclusive glossary, the first OST “Help Me” by popular Korean girl group (G)I-DLE will be released on 11 April at 7PM (GMT+8).The song depicts the sweets and bitters of love which fits the scenario of this romantic comedy perfectly.

Her Private Life will broadcast on tvN in Asia from 11 April (Every Thursday and Friday) at 21:45 (GMT+8) in Singapore and Malaysia, and at 20:45 (GMT+7) in Indonesia. The drama is paired with English, Chinese, Bahasa Malaysia and Bahasa Indonesia subtitles.

Her Private Life is available on tvN in the channels listed below:

Hellokpop, as an independent Korean entertainment news website (without influence from any agency or corporation), we need your support! If you have enjoyed our work, consider to support us with a one-time or recurring donation from as low as US$5 to keep our site going! Donate securely below via Stripe, Paypal, Apple Pay or Google Wallet.
FacebookTwitter
SubscribeGoogleWhatsappPinterestDiggRedditStumbleuponVkWeiboPocketTumblrMailMeneameOdnoklassniki
Related ItemsHer Private LifetvN
← Previous Story K-Drama Premiere: “My Fellow Citizens”, A Quirky And Fun Addition To The Weekend
Next Story → KBS Confirms Cast for Upcoming Thriller Drama “Let Me Hear Your Song”