Scheduled for August premiere, the series is based on the novel of the same name by Jung Eun Gwol who also penned iconic dramas Moon Embracing the Sun and Sungkyunkwan Scandal.

It tells the story of Hong Cheon Gi (Kim Yoo Jung), an artist with extraordinary aesthetic insight and skills who became the first female painter of the Dohwaseo (Korean Royal Academy of Painting).

The drama is set in the fictional era of “Dan Dynasty” and will be helmed by director Jang Tae Yu of Hyena, My Love From The Star and Tree With Deep Roots fame. 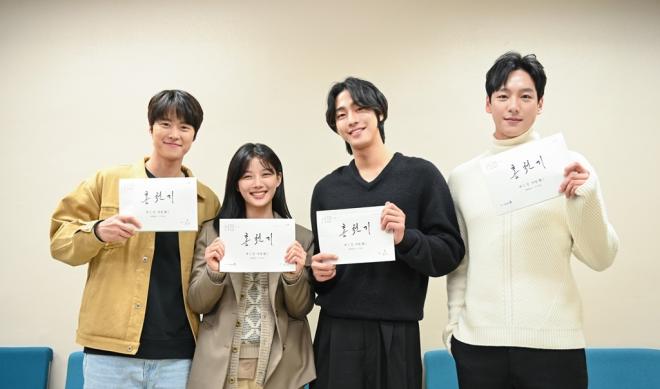 Ahead of its premiere, Hong Cheon Gi unveiled photos from the read-through held in November last year including the cast and creative team of director Jang and writer Ha Eun.

First, Kim Yoo Jung perfectly assimilates to the titular role of Hong Cheon Gi, a genius female painter. Kim’s passionate performance, which exuded the charm of the strong and courageous Hong Cheon Gi, energized the reading scene. Like a historical drama fairy that she is, the actress impressed everyone with her solid acting skills and character analysis.

Ahn Hyo Seop, who emerged as a representative actor in his 20s, revealed his unrivaled presence as Haram, a man who reads the constellations in the sky. He beautifully and mysteriously suits up to the red-eyed Haram. It further heightens a new character for the diligent actor.

Building up his filmography across movies and dramas, Gong Myung plays the role of Prince Yang Myeong, an art lover. He is expected to captivate the hearts of women by transforming into a prince who likes poetry, calligraphy, and painting.

Kwak Si Yang showed his heavy charisma by playing the role of Joo Hyang, who dreams of becoming the King. He challenges a role that would instill tension in the play.

The production team invites fans to anticipate the series.

“It was a script reading that confirmed the actors’ passionate performances and synergy. It was a scene full of liveliness to the extent that each character in the script could be felt vividly. We ask for your interest and anticipation for ‘Hong Cheon Gi,’ an extraordinary fantasy romance that is like a beautiful picture.”

SBS new Monday-Tuesday drama Hong Cheon Gi is scheduled to premiere in August. International fans can watch it on Viu.