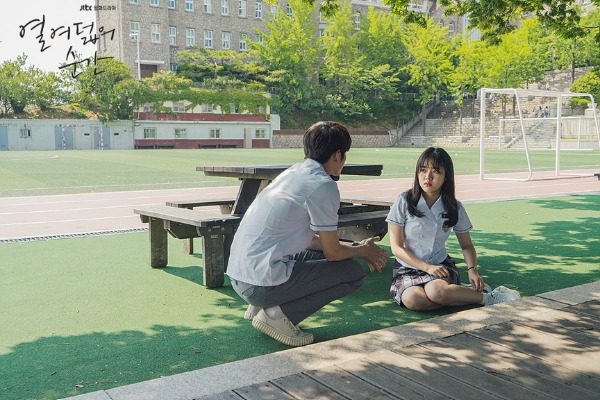 The kids are at a crossroads as they struggle to keep up with the adults while trying to make decisions on their own.

At Eighteen keeps its promise of giving viewers a drama that will make them reminisce their teenage years. Also it depicts problems that teenagers, regardless of social or economic status, could relate to. The pressure which seems to come from every direction is all too real, and the adults which these youngsters expect to rely on only aggravate the situation. 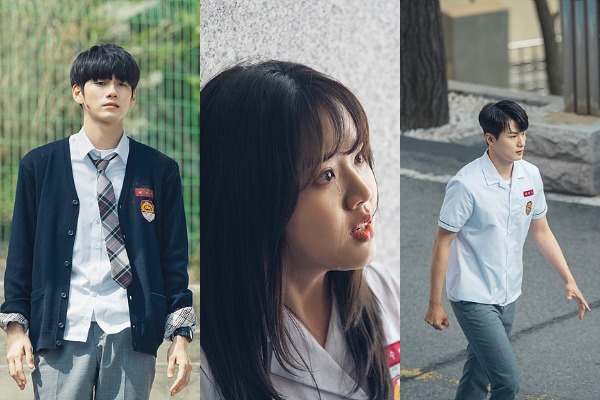 No more running away

Choi Joon Woo decides to stay in Cheon Bong High School and vows to face Ma Whi Young head on. His temporary Home Room adviser Oh Han Kyeol is very much delighted with his decision. Yoo Soo Bin and most of his classmates are also happy that he is not transferring, except for Ma Whi Young, for obvious reasons. 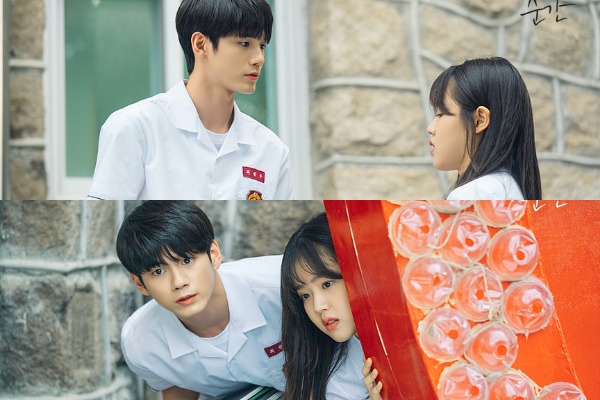 Yoo Soo Bin’s mother is still adamant in making her join Ma Whi Young’s academy Math class to the point that she sucks up to Whi Young’s mother and acts very indulgent with her. Soo Bin can’t stand to see her Mom act that way and she argues with her. However, she reluctantly agrees to take the level test to appease her mother. Soo Bin passes and starts to attend the class, but when her friend finds out about it, a conflict ensues.

A childhood friend reveals the truth

Ma Whi Young discovers that the school allows Joon Woo to stay on the condition that he does not get into trouble. He instructs Lee Ki Tae to find a way to engage Joon Woo in a conflict, and he somehow manages to get in contact with Joon Woo’s former schoolmates and his childhood friend Shin Jung Hoo.

Unaware of Whi Young’s plans, Joon Woo receives text messages from his former classmates but he ignores them. However, when he receives a call from Jung Hoo, he rushes to go to him instead of hanging out with Soo Bin. 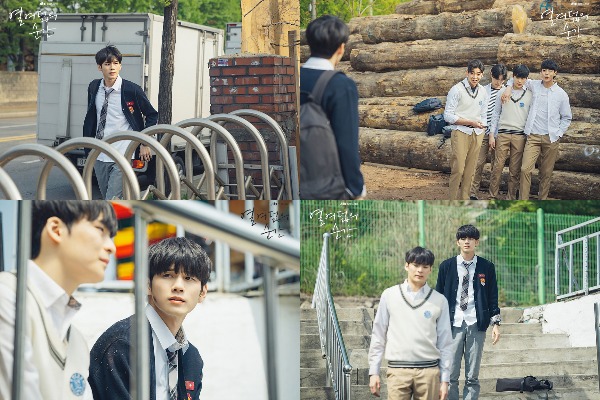 Joon Woo meets up with the bullies and initially refuses to engage, but when they start to hurt his friend, he loses it and exchange blows with them. Fortunately the police came before someone from school so they all break away and run in different directions. Jung Hoo and Joon Woo have a moment to talk and the former apologizes for almost landing both of them in trouble.

Joon Woo tells him not to hang out with the bullies anymore, but Jung Hoo says they are all he got as he abandoned him when he transferred to another school. His friend also tells him to just mind his own and not bother with him anymore. 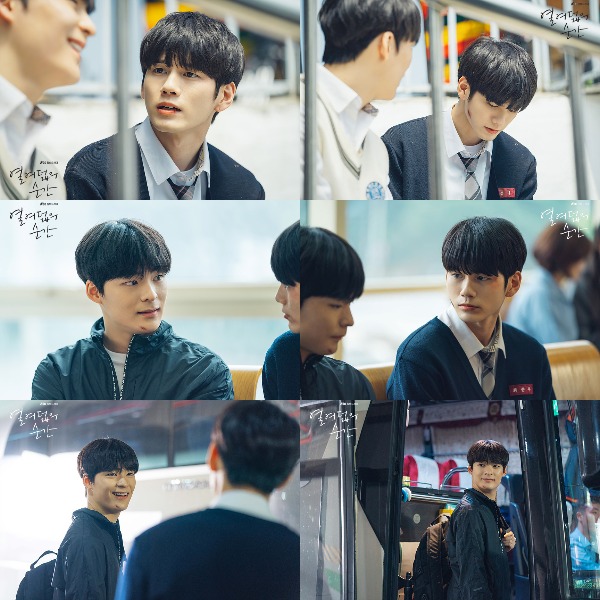 Jung Hoo hands in a letter explaining the circumstance which led to Joon Woo’s forced transfer. Oh Han Kyeol tries to go after him but fails. However, Joon Woo manages to get on the bus with him. Jung Hoo reveals that he quits school and will now work to avoid the bullies. Joon Woo tells him that their lives are not a complete waste and there is time to make things go around, even for people like them.

Unfortunately, Jung Hoo got into an accident and did not survive. Joon Woo later finds out that Lee Ki Tae made contact with the bullies and that he gave them money. He gets so angry at that information that he lashes out to Ma Whi Young and punches him several times. He is only able to stop after hearing Soo Bin’s voice. Joon Woo confesses to Oh Han Kyeol what he learned and tells him on Whi Young’s involvement. 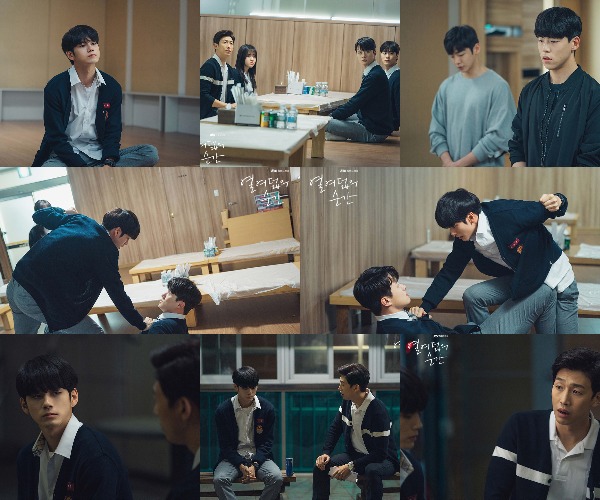 Ma Whi Young is in Trouble

Lee Ki Tae and Ma Whi Young talk and discuss what happened to Joon Woo’s friend. He scolds Ki Tae for giving them the money when he did not told him to do that. Ki Tae argues they have nothing to do with Jung Hoo’s death as it happened while he was on his way home from work. Whi Young counter argues that while the harassment was done by Jung Hoo’s schoolmates, it was Ki Tae who urged them to continue which forces him to quit school. 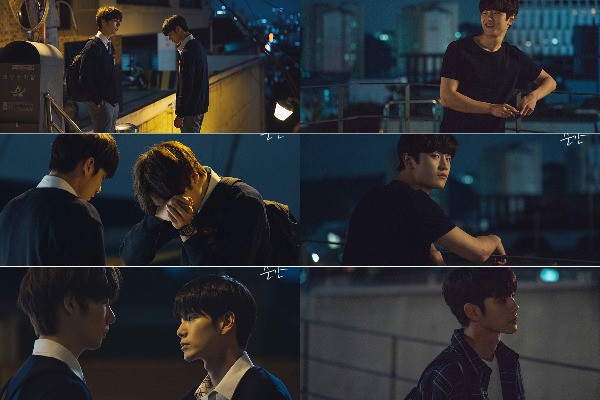 Lee Ki Tae feels that Whi Young is turning his back on him after his mess up. But Whi Young talks to his mother and asks for help, and eventually the bully retracted his statement. The retraction absolves Ki Tae (and Whi Young) of any association with the students who bullied Jung Hoo.

Ma Whi Young faces another challenge as Sang Hoon threatens to take his rank as the number one student. He gets so angry when he got the wrong answer to a single Math question coupled with Joon Woo carrying a sick Soo Bin to the clinic. He calls his academy teacher to confirm if Sang Hoon has the right answer. 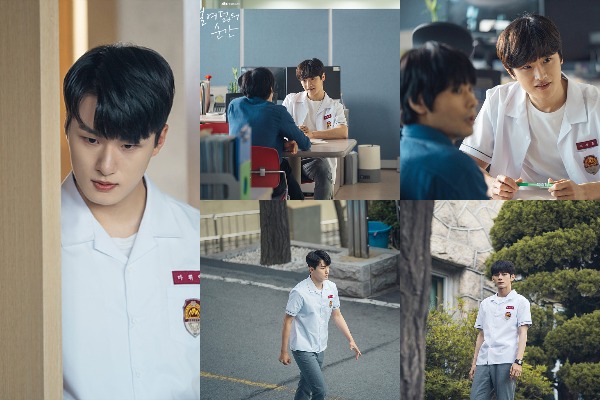 His teacher tells him that the question is quite tricky but Sang Hoon answered it correctly. He is fuming and he lashes out to Oh Han Kyeol, saying he knows nothing and that he is not even a Seoul National University graduate.

At home, Whi Young’s father is angry because of that single incorrect answer and lashes out to him. He tries to conceal the bruises by changing after the other boys are done. However, he fails to notice Joon Woo is still inside the changing room and is able to see the welts in Whi Young’s body. 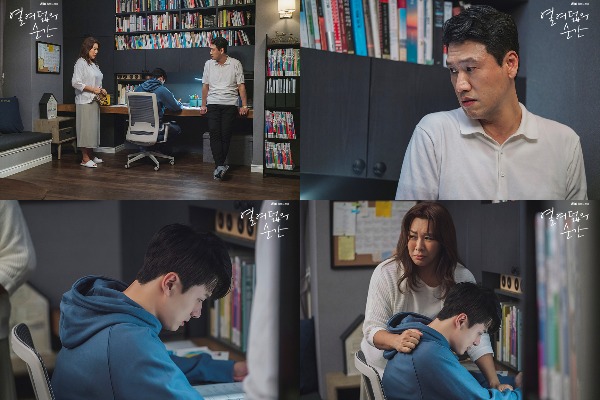 Meanwhile, Oh Han Kyeol starts to assert his authority in class which Ma Whi Young seems to undermine. He establishes a free English talking activity instead of a regular exam which Whi Young opposes. He also tells him to bring back their old sitting arrangement. If he plans on changing it, he has to do it after the midterm exams.

Ma Whi Young refuses to budge with the seat assignments and Oh Han Kyeol suggests that those who support Whi Young’s arrangement must stay in front and those who opposes can be at the back with the classmate they want to sit with. 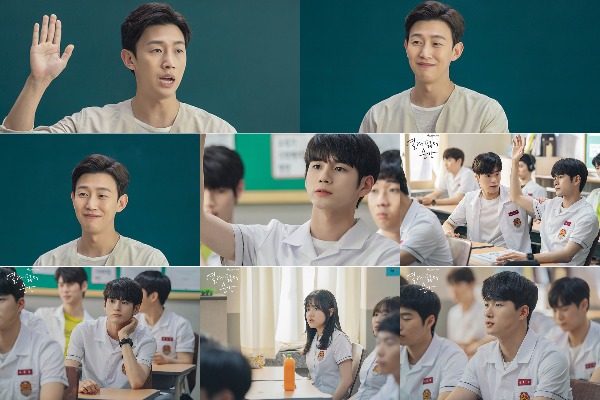 The vice principal talks to him and tells him to call off the free talking activity as most parents are against it. However, the next day he asks the class to pair up much to Whi Young’s annoyance. Yoo Soo Bin and Choi Joon Woo end up being partners. Ma Whi Young dislikes the idea of the two of them spending time together so he confronts Joon Woo.

Soo Bin quits the math Academy much to her mother’s disappoint and they had a fight. She almost spends the night in her friend’s house but decides to go home and face her mother instead. Meanwhile, Joon woo tries to go to Soo Bin to clarify their misunderstanding. Finally hearing that Joon Woo likes her back, the two set out to meet each other and watch a movie. 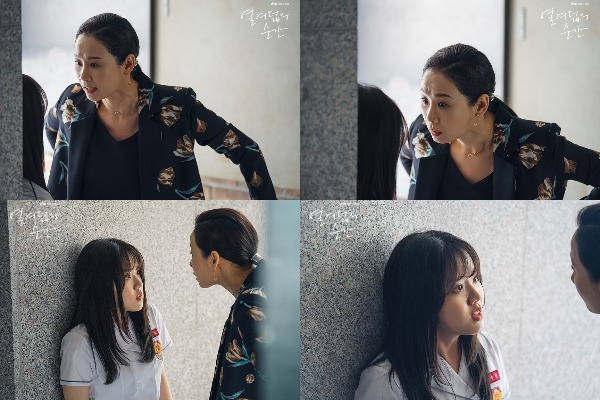 The mothers, led by Whi Young’s mom want to take a look on Oh Han Kyeol’s capability as their permanent homeroom adviser so she insists to have a special open class session. He encourages Joon Woo to participate in the discussion and contradicts Ma Whi Young’s argument. Though most of the mothers are not impressed. Some parents side with Joon Woo’s stand.

After a visit from Whi Young’s mom, the Math teacher changes his stand and accepts Whi Young’s answer as the correct solution. Citing that the question is indeed tricky, Whi Young remains to be the overall top student. However, Sang Hoon will not easily give up the seat as he confronts his teacher. He argues that there is nothing wrong with the question, it is just that Whi Young failed to understand it making him provide the wrong answer.

He proceeds to talk to Whi Young’s mother face to face and somehow threatens he will expose the truth about the watch and everything else. His dad who happens to be working under Whi Young’s father begs for forgiveness for his son’s actions. Whi Young witnesses how Sang Hoon’s dad grovel for his father’s understanding. 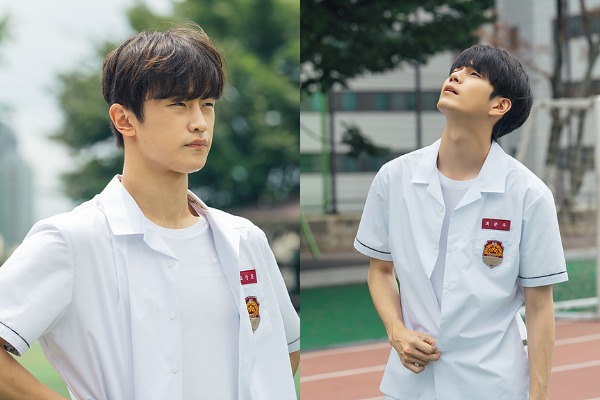 Much to Sang Hoon’s disappointment, he has to accept and let go of his complaint. His father gets the job in Singapore all of a sudden, and he has to go with him. Joon Woo challenges Sang Hoon in another race and reminds him of their first encounter in the field. He also tells Sang Hoon that he is running away from his problem but Sang Hoon dismisses it.

After admitting they mutually like each other, Joon Woo invites Soo Bin to watch a movie together. She is quite reluctant to accept the invitation after her friend confesses she likes Joon Woo too. 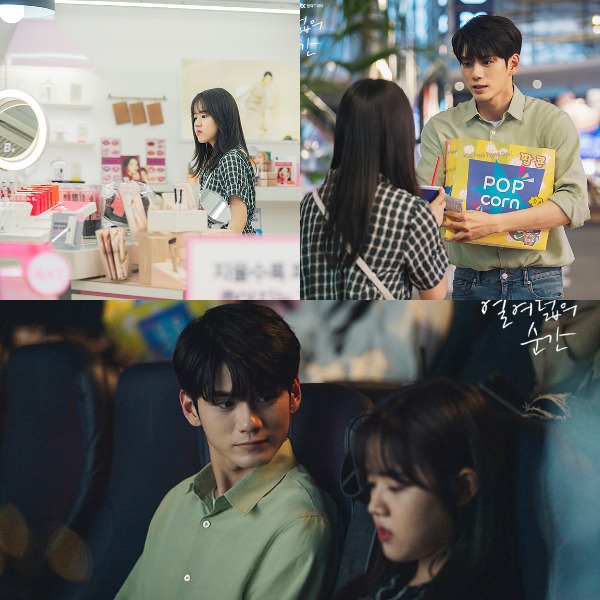 Her friends convince her to accept Joon Woo’s invitation and she relents. Both of them are excited for their first movie date. They get in the theater place a lot earlier than the time they agreed to meet. Joon Woo and Soo Bin are awkward with each other but share smiles as they go inside the movie house.

Whi Young got wind of the date and he is mad. He sends Soo Bin a text message which puts a damper on their happy day.

At Eighteen has all the elements that make a good campus romance. It also contains clichés and tropes expected of this genre. However, what makes it stand out are the characters’ portrayals and the realistic depiction of situations based on true-to-life events.

I love how each character is given enough spotlight to show their growth and development. Oh Han Kyeol, specifically has gone from someone who is a pushover to slowly asserting his authority. He stood up and fought for his position. He is somehow seeing through Whi Young’s tough façade and inching his way to make him open up.

I particularly liked that scene in the clinic when he asked Whi Young if he is okay and that he can lean on him if he is having a hard time. It was clear that Ma Whi Young was moved by the gesture because he seldom gets that kind of reaction from adults. 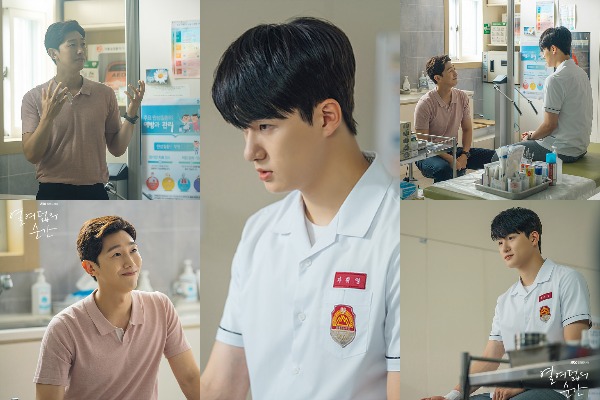 Whi Young, despite his calculating and manipulative attitude, is not completely irredeemable. He knows he did a lot of bad things and its eating him from the inside. His skin condition is not only stress related but also a result of a guilty conscience. His parents played a huge role in most of his actions and them doing everything they can, in whichever manner, to cover up his mistakes is not helping Whi Young at all.

At Eighteen also highlights how parents can truly influence their children. The parents who keep imposing their power and authority over their children are not setting a good example and only puts a strain in their relationship. Kids at this age, naturally to seek an outlet for all their frustrations and disappointments, and it does not matter how they do it. 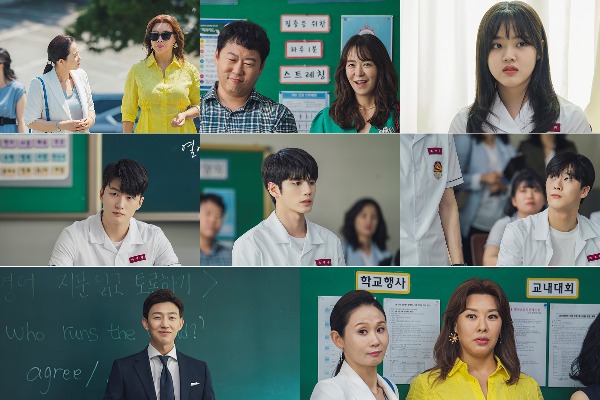 I felt Sang Hoon’s anger when all his hard work went down the drain just because Whi Young’s parents have influence over his. I also felt Soo Bin’s vexations about her mom’s obsession. She is deliberately ignoring her daughter’s desire to live a life of her own by controlling her.

Despite the different conflicts, At Eighteen maintained its appeal. The characters are getting more intriguing and engaging as well as the story. I have high hopes that it would remain so until the final episode. I am looking forward to further developments and resolutions to these conflicts.

At Eighteen airs on jTBC at 9:30PM KST every Monday and Tuesday.