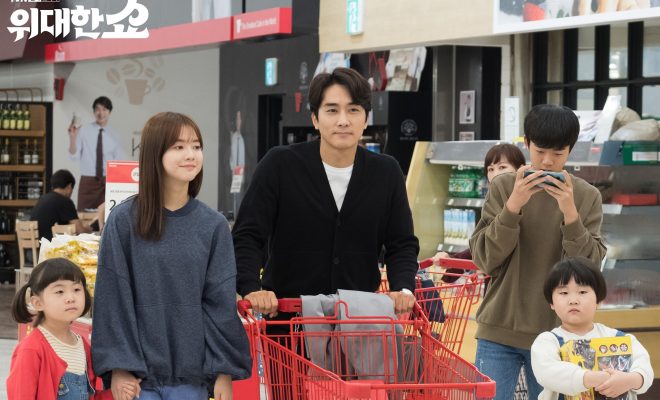 Song Seung Heon continues to put on a great show as Wie Dae Han in his current drama.

The Great Show keeps viewers’ interest with its narrative and engaging characters as it reached its halfway mark. Struggling to get back into the Assembly, Dae Han concocted an elaborate scheme to change the public’s opinion about him. During the premiere week, viewers witnessed Dae Han’s fall from grace after losing in the elections. Following the news of his father’s death, Dae Han was exposed as being a reprobate son. His supposed neglect of his father cost him dearly. 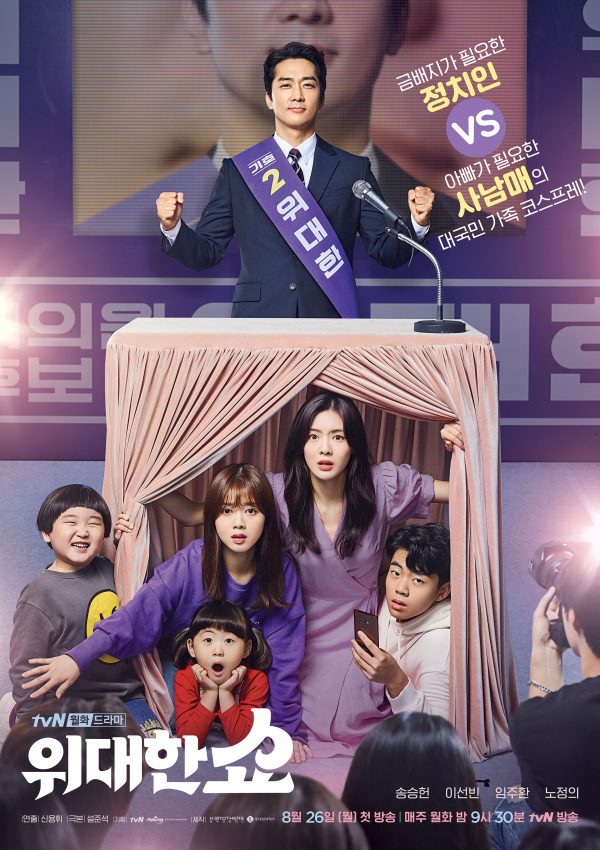 Dae Han was forced to work as a designated driver, working during the evening and trying desperately to remind people about him. Unfortunately, Dae Han is no longer getting the warm welcome he used to receive. People no longer remember him, or if they do, they think of him as a reprobate son. Nevertheless, Dae Han is persistent and still wants to get back into politics. It looks like Dae Han is willing to do anything just to win the next elections.

However, Dae Han gets the surprise of his life when Da Jung shows up and claims that she is his biological daughter. Not only that, Da Jung also has her three other siblings with her. For once, Dae Han is completely speechless. 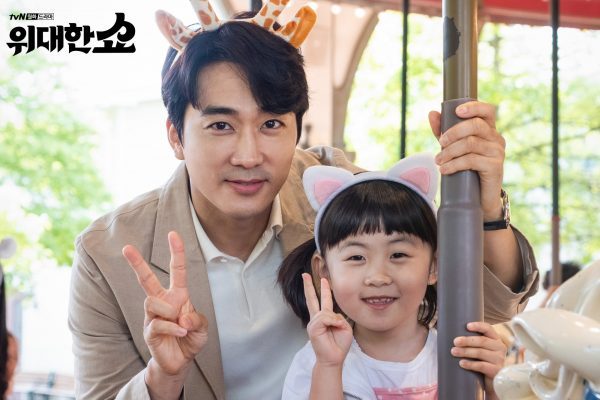 Dae Han and His “Children”

After getting over his shock at seeing a group of children at his doorstep, Dae Han has no choice to take the children in. He’s clearly overwhelmed at having so many children at once. Initially, Dae Han can’t remember Da Jung’s mother, but Da Jung manages to jog his memory along. But still, Dae Han can’t believe he has a daughter.

From the premiere week, Dae Han asks for a paternity test from Da Jung, who readily agrees. Da Jung is certain that Dae Han is her father. The test come back negative though, so Dae Han is aware that he’s not her birth father. But Dae Han doesn’t mention this to Da Jung when he decides to get the children back from their home. Meanwhile Soo Hyun gets involved in taking care of the children as well.

Dae Han and Da Jung sign a contract about their arrangement. The children settle in and Dae Han has to take out a loan to fund the expenses. He’s surprised at how quickly he has to spend money with all the children around. 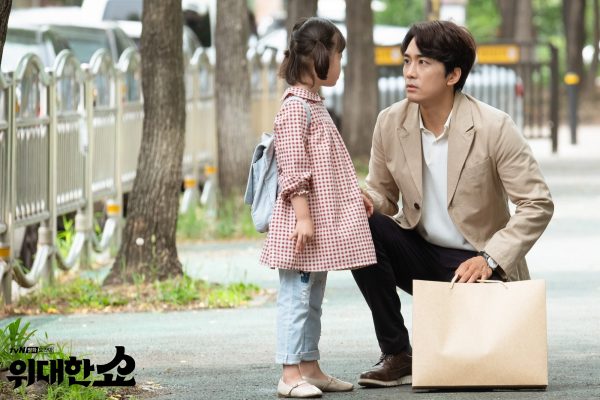 Da Jung releases a post detailing her story with her “dad” so far, and it quickly gains attention. People start looking at Dae Han in a more favorable manner, and he’s enjoying every minute of the attention. Dae Han quickly devises plans to take advantage of his current situation, which doesn’t put Dae Han in a very good light. But then again, Dae Han is saddled with the enormous responsibility of caring for 4 children, so he’s milking it out as much as he can. His every move is calculated as to whether it can look good in public, and Da Jung is aware of this. 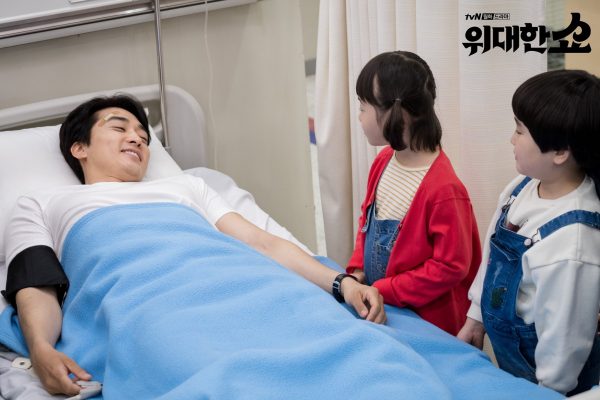 Tak is also suspicious of Dae Han’s motives, but he doesn’t say anything. Instead he takes advantage of the situation by getting Dae Han to buy him a new smartphone. Meanwhile, Dae Han realizes that the 4 children is more responsibility than he bargained for. 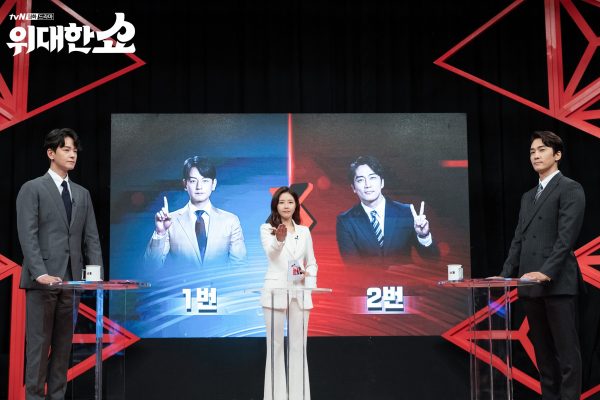 Thanks to his brand new reputation, Dae Han managed to get a position in the TV show Soo Hyun works for, Debate.  He goes against Joon Ho for the first time. They decide on a hot yet sensitive issue, abortion. Dae Han staunchly defends his stand and gets a favorable response.

However, Da Jung reveals a bombshell shortly after the show. She finds out that she is pregnant. Initially, she talks to Soo Hyun about it first, who encourages her to tell Dae Han. Soo Hyun and Da Jung tell both Jung Woo and Dae Han. Immediately, an enraged Dae Han calls Da Jung and Jung Woo. Contrary to his stand during the TV show, Debate, he encourages Da Jung to get an abortion. The 4 go to the abortion clinic, but in the end, Da Jung decides against it. This upsets Dae Han, but Soo Hyun asks him to respect Da Jung’s decision.

Unfortunately, photos of the 4 are released online, and the secret is out. Da Jung bravely continues to go to school, and Dae Han makes a heartfelt speech on Debate, addressing Da Jung’s pregnancy. In the end, Dae Han still managed to salvage his reputation as the “Nation’s Dad”.

Despite being continuously present for Dae Han’s new children, Soo Hyun also has family problems of her own. Her parent’s chicken restaurant lost customers due to a malicious neighbor’s online posts. Dae Han and Soo Hyun work together to help restore her family’s business. Meanwhile, constantly being together with Dae Han reminds Soo Hyun of her past with her college senior. 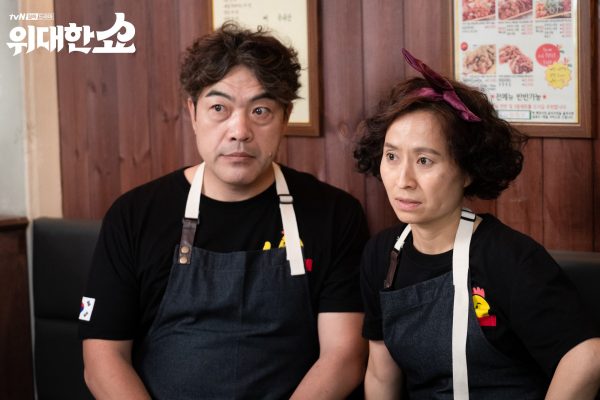 It turns out that Soo Hyun used to have a major crush on Dae Han in university. One day, Dae Han invited her out for a movie to thank her for all her work in the student council. Giddy with excitement, she pleads with her younger sister to go to the department store and do an exchange for her. Unknown to Soo Hyun, her younger sister gets into an accident in the department store. The elevator she was on crashes and kills her instantly. Devastated, Soo Hyun turns away from Dae Han due to her grief. 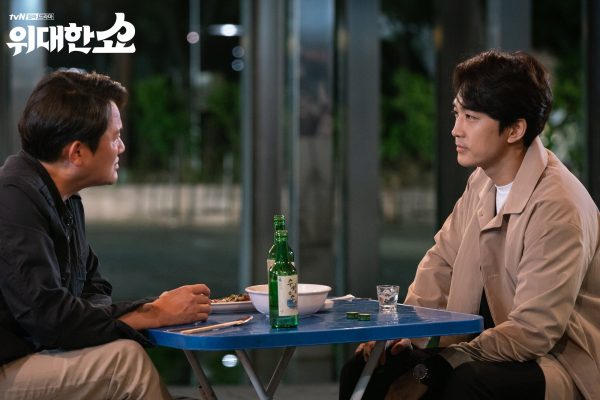 One day, the twins’ and Tak’s father, Han Dong Nam, suddenly appears. Initially, he makes up a sob story of fleeing to Vietnam to escape the loan sharks. But then, he mooches off Dae Han and gets his debit card. He then takes his children to go shopping and spends recklessly. However, Dae Han calls him out and tells him that he knows he never went to Vietnam. In return, Dong Nam tells Dae Han that he knows he’s not Da Jung’s real birth father. 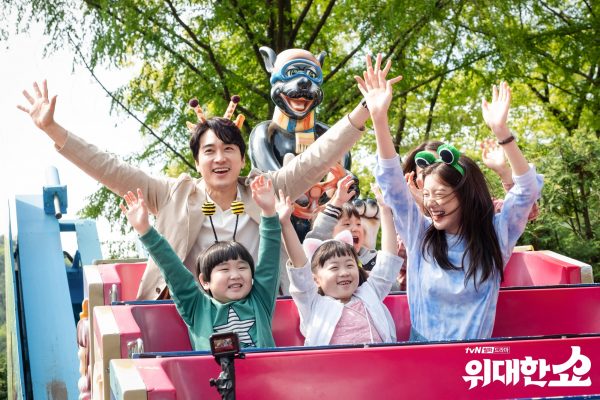 To be honest, I didn’t expect that The Great Show would be this likable or entertaining. I’m still conflicted about Song Seung Heon’s character, Wie Dae Han. His motives are very questionable during the entire drama. Additionally, I still question his sincerity in every kind move to act like his father. In short, I’m still waiting for Dae Han’s moment of redemption. So far, everything I see is for his own selfish motive.

That being said, I think my personal feelings towards Dae Han’s character speaks highly of Song Seung Heon’s effectiveness as an actor. He created a thin line between being an honest and sincere father and a sleazy politician taking advantage of the situation. Thus, viewers go back and forth between the good and selfish sides of Dae Han.

Additionally, I love the children and how energetic they made the drama. Da Jung’s character, portrayed by Roh Jeung Eui, is an impressive and mature high school girl with a lot on her shoulders. Roh impressed me with her acting on Kill It, and she continues to mature with her role as Da Jung. In fact, it’s her character that moves the drama so forcibly. I admire the sense of maturity in her character, and Roh pulls it off flawlessly.

The first half of the Great Show flew by so fast. With no dull moments, it lures in its viewers and keeps them entangled in Wie Dae Han’s pretenses. It confuses the viewers in whether we should root for him to be a successful politician, or to rightfully get what he deserves because of his deceit. Nonetheless, it keeps the viewers engrossed and ready to welcome its upcoming episodes. Hopefully, the second half of the drama will be as engrossing as its first.

The Great Show is currently airing on tvN every Monday and Tuesday at 9:30 pm KST.

We need your support! If you have enjoyed our work, consider to support us with a one-time or recurring donation from as low as US$5 to keep our site going! Donate securely below via Stripe, Paypal, Apple Pay or Google Wallet.
FacebookTwitter
SubscribeGoogleWhatsappPinterestDiggRedditStumbleuponVkWeiboPocketTumblrMailMeneameOdnoklassniki
Related Items2019 tvn dramaSong Seung HeonThe Great Show
← Previous Story K-Drama Premiere: “When The Camellia Blooms” Delicately Hints At A Beautifully Entwined Blossoming Of Love And Mystery
Next Story → Nam Joo Hyuk And Lee Sung Min Confirmed For 2020 Film “Remember”