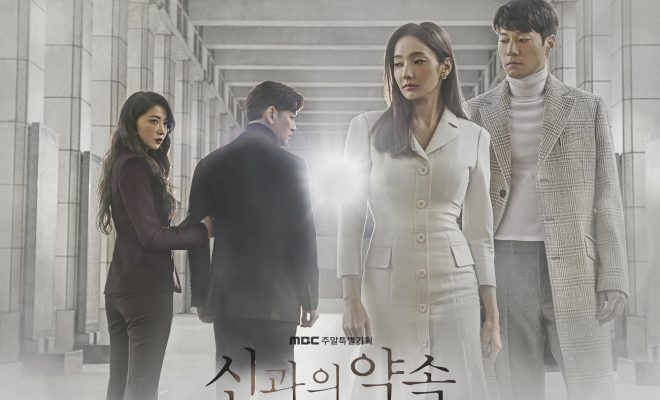 K-Drama Premiere: “A Promise To The Gods” Challenges To Define Morality When Saving Loved Ones

Are you willing to do everything to save your child, even if by society’s standard – immoral and unethical? 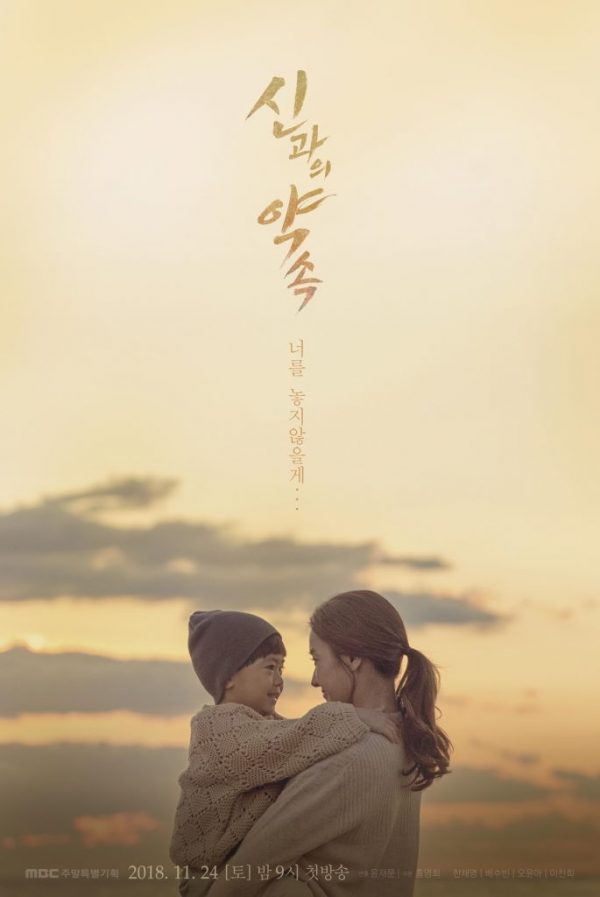 A Promise To The Gods shows the lengths parents are willing to go to make sure their child gets to live longer. Apart from a “controversial” method, the characters’ lives are more intricately connected than what it was perceived. Ex-married couple Kim Jae Wook and Seo Ji Young parted ways because of the former’s infidelity.

He got Woo Na Kyung pregnant, and as punishment, Ji Young divorced him. She also did not allow visitation rights for their child. Their son is diagnosed with leukemia, so both parents will have to make a decision to prolong their child’s existence. 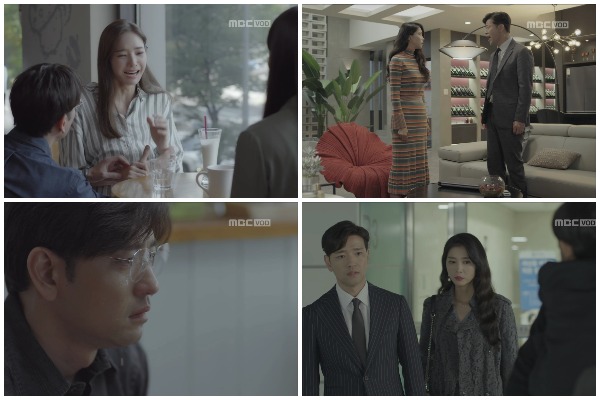 Former TV personality Seo Ji Young (Han Chae Young) stands on trial. The media hounds her case but she seems indifferent and without remorse. Woo Na Kyung (Oh Yoon Ah) questions her if she regrets her action. She answers with a question of her own, which rattles Woo Na Kyung.

The story goes back ten years before her trial, which reveals the relationships of each character. Seo Ji Young wraps up the 100th episode of her talk show and her son runs towards her with a bouquet of flowers.

At the same time at a hospital, Kim Jae Wook (Bae Soo Bin) stares at a monitor where Ji Young’s son is shown. He becomes emotional and his wife Na Kyung witnesses it. They soon discover that she is not pregnant. 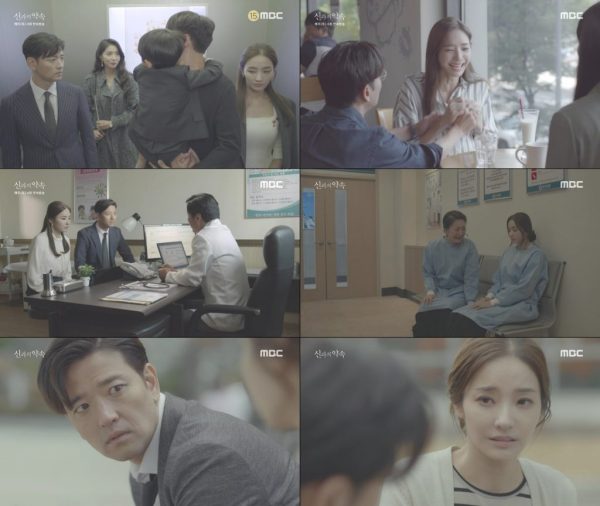 At the same time, Ji Young and her husband take Hyeon Woo to the hospital as he experiences a nosebleed. They are about to ride the elevator when Ji Young sees that Na Kyung and Jae Wook are inside. Her husband is unaware of the situation and is surprised to see Ji Young hesitate. In the parking lot, Jae Wook can’t seem to take his gaze off his son which Hyeon Woo notices as well. At home, Ji Young tells her husband that the man is Hyeon Woo’s biological father.

READ : Han Chae Young Returns To The Small Screen With MBC Drama “A Promise With The Gods”

Meanwhile, at Jae Wook’s house, his father announces about Na Kyung’s pregnancy in front of the board members. After dinner, he tells his father that his wife is not pregnant to which his father says it is alright, although embarrassing. He also recalls that Jae Wook already has a son and it is time to bring him into the family fold. Jae Wook refuses, and in their room, the couple argues.

Further flashbacks reveal that it is Na Kyung who initiated contact with Jae Wook. She is also the one to tell Ji Young of their affair, although Jae Wook says it just happened once. Ji Young files for a divorce and promises Jae Wook he will never ever see their child.

Jae Wook marries Na Kyung but she loses the child. She suffers several miscarriages which disappoints Jae Wook’s father. It only fuels Na Kyung’s insecurity and she becomes even more desperate to conceive. 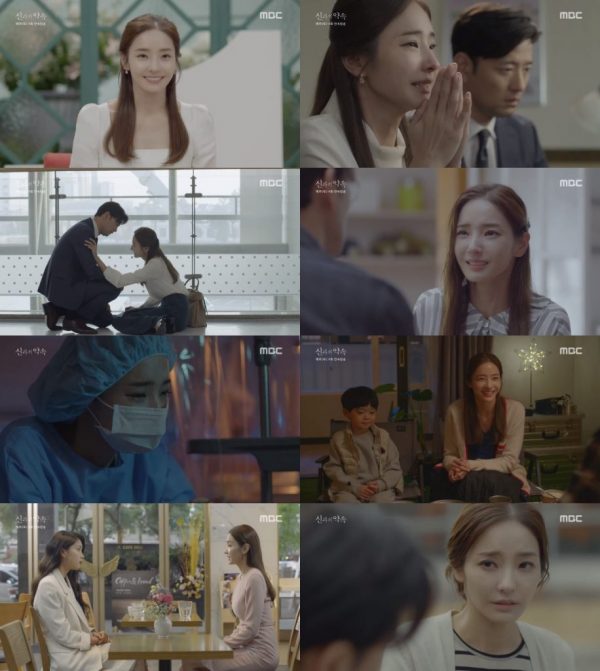 Ji Young is summoned to the doctor’s office and Hyeon Woo’s test result shows that he has leukemia. The doctor advises her that both parents should be tested to see if any of them is a match. This prompts Ji Young to call Jae Wook. Na Kyung sees the two of them leave the office building and she tries to catch up with them, but she fails.

When their test result come out, they are both devastated to learn that they are not eligible to become bone marrow donors for Hyeon Woo. The doctor tells them to have Hyeon Woo listed to await a suitable donor, but it will take time. He also said that if only Hyeon Woo has a sibling, it is most likely to be a match.

Jae Wook then convinces her sister and nephew to take the test to see if they can be donors, but they also fail. He also tells Na Kyung of Hyeon Woo’s condition. Na Kyung uses this to meet up with Ji Young to tell her they will file for custody of Hyeon Woo. Ji Young responds that she should be afraid of her because she will not hesitate to destroy her family if she ever continues to pursue a custody case. She will have Jae Wook even if it means adultery – if Na Kyung pursues the case. Na Kyung records all of this and releases a video which has gone viral. Ji Young chooses to step down from the limelight and just concentrates on her son.

Na Kyung still wants to gain the approval of Jae Wook’s father, so she says she will continue with the lawsuit to get Hyeon Woo from Ji Young. Jae Wook gets wind of the situation and tells Na Kyung to back off, or else he will file for divorce.

Hyeon Woo gets hospitalized and this troubles Ji Young. Desperate and losing hope, Ji Young suggests to Jae Wook that they should make a sibling for Hyeon Woo.

A Promise To The Gods intrigued with its premise. It is quite an unusual plot and the story’s flow gave enough insights into the characters. The pilot week episodes showed enough personality of each character that viewers could not help but see what motivated them.

There were flashback scenes that showed how happy Ji Young and Jae Wook were in their marriage, and because of that, you could easily see they would do anything for their child. Na Kyung, despite being the cause of the couple’s divorce, is also a type of person that viewers can sympathize with. Sure, her actions led to a marriage dissolution, but some might argue it was not a one-sided thing. Jae Wook clearly regretted what he did as he just accepted Ji Young’s “punishment”. I think Jae Wook is willing to not see his son forever, just so he can gain Ji Young’s forgiveness. 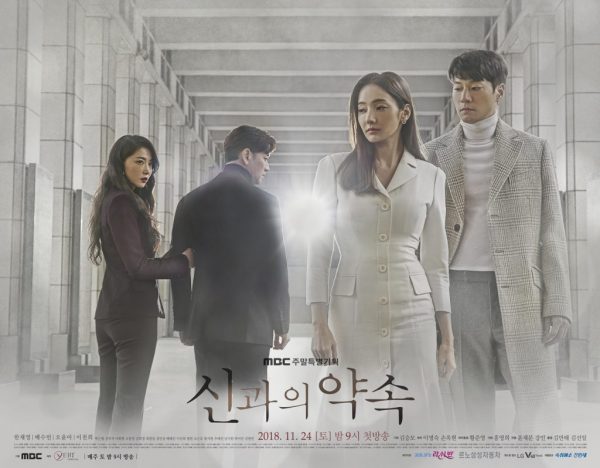 It was clear both Ji Young and Jae Wook still had feelings for each other, although the former kept telling herself she hates Jae Wook. However, there was a fine line between love and hate right? It will be interesting to see how the drama explores this aspect.

I have high hopes for this drama, which I did not expect at all. I wish it can keep up with the pilot week’s impressive episodes. It is a rare thing to see a drama that challenges what our society deems right or wrong. I can see that A Promise With The Gods is not trying to justify what is moral and ethical to what is not, it is trying to show the actions and decisions we take that make us human.

Watch A Promise To The Gods on MBC at 9PM every Saturday.