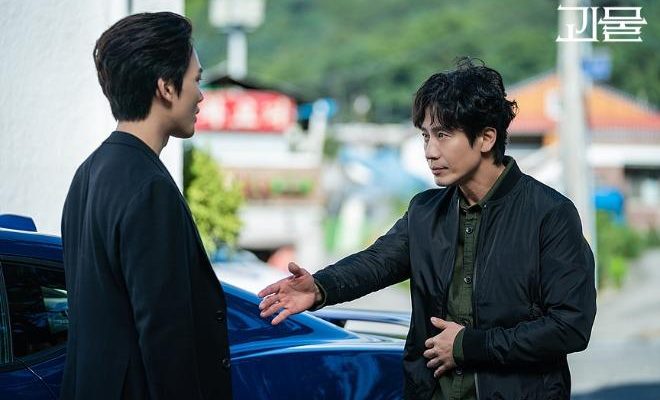 K-Drama Premiere: “Beyond Evil” Showcases Enigmatic Characters Pulled Together By A Town’s Sordid Past

A small town in the outskirts of Seoul is facing a dilemma – one the townspeople have encountered 20 years before.

Beyond Evil, for a psychological thriller started a bit ho-hum. However, it picked up its pace as it progressed up to the end of its two-episode premiere. It was exciting to see Shin Ha Kyun and Yeo Jin Goo played out their roles as police officers suspicious of each other. 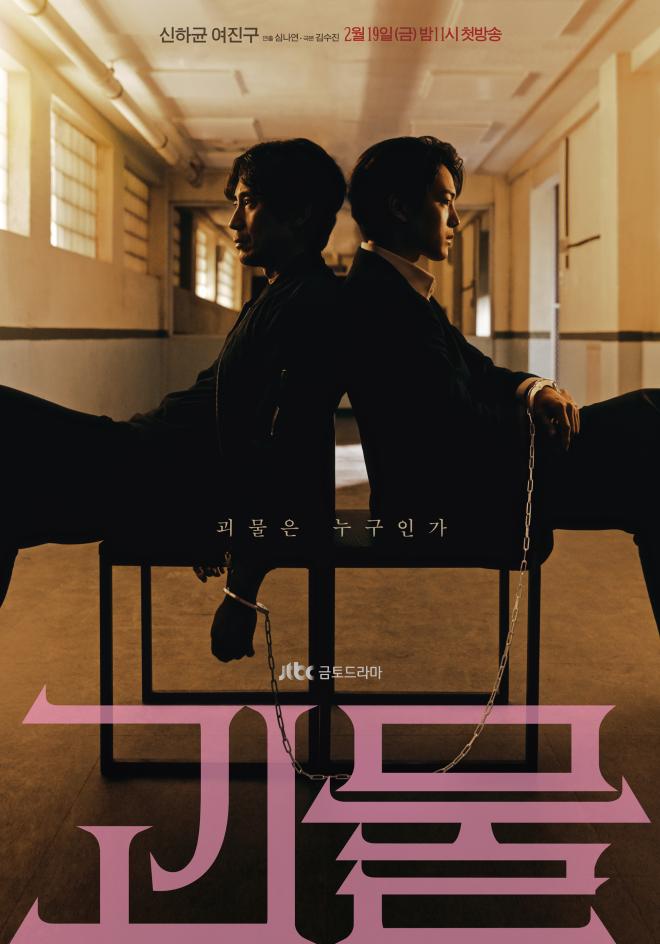 The series depicted the dynamics of a small town well as it exhibits behaviors and customs commonly found in rural areas. There is generally peace and quiet. Everybody knows each other and there are no secrets among its residents. However, the tranquility of the town gets shattered when in the year 2000, two of its citizens ended up dead. One found with her feet tied together, while the other body remains missing and only parts of her fingers recovered. While there was an arrest made twenty years ago, without the body of the other victim, the case went cold.

An old man with dementia wanders and the family calls in the police for help. Police Officers Lee Dong Sik (Shin Ha Kyun) and Oh Ji Hun look for him in the reed field. The two officers split up and moments later, Dong Sik hears Ji Hun’s grunt as he slips. He tells the older man he is okay.

Later, he screams louder when he gets a clearer view of what’s in front of him. Dong Sik rushes to the scared young man and also stops in his tracks as he sees a decomposed body. This discovery brings back memories from Dong Sik’s past. 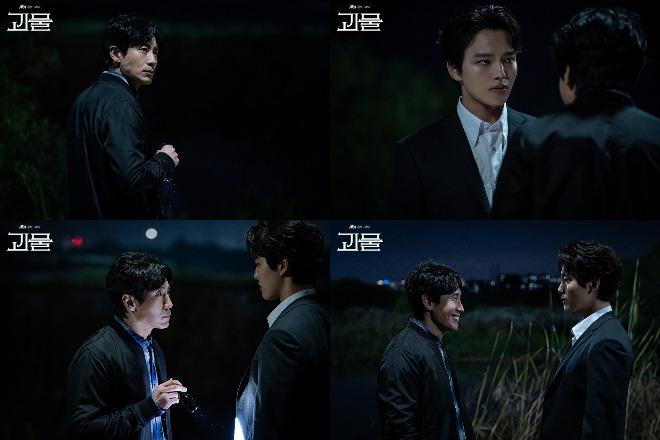 Back in the year 2000, a young Dong Sik was busy playing guitar in a café while his mother and twin sister were at the church. His mom tried to contact him but failed to get a response from Dong Sik. In the café, employee Bang Ju Seon told Dong Sik to stop playing as he was no good and ended up comparing him to his achiever twin sister Lee Yu Yeon.

Clearly sensitive to the comparison, Dong Sik’s demeanor changed and with a serious face confronted the woman. Ju Seon challenged him and encouraged him to hit her so his father could pay for the damages. Dong Sik held himself in check and chose to walk away. That night, Yu Yeon received a text from her brother, telling her to come and meet with him. Without their parents’ knowledge, Yu Yeon sneaked out of the house, but she never returned home.

That morning, while her mother picked up the morning paper, she noticed something on the ledge – severed parts of fingers lined-up for her to see. On that same day, authorities found Bang Ju Seon’s body in Manyang Farm. 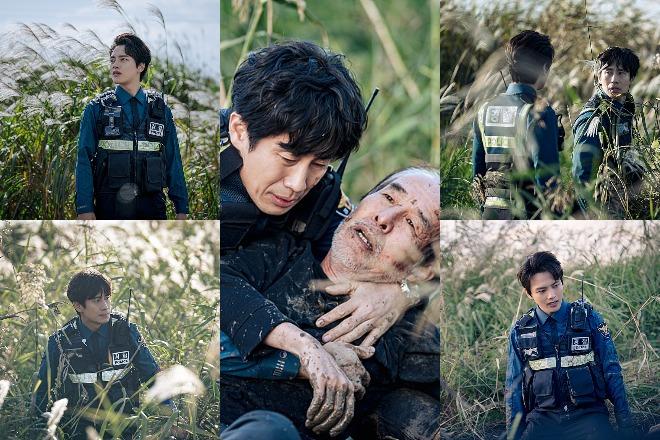 The Elite Detective with a secret (mission?)

Back in the present (and before the discovery of the body in the field), Dong Sik and Ji Hun responds to a fight in the salon. The owner and the patrons argue over bets in hwatu (flower cards game). Dong Sik initially tries to be nice as he diffuses the fight, but the ladies have other things in mind. He decides to arrest all of them and brings them to the station.

The women try to plead their cases, but Dong Sik is adamant to file reports on them. As he prepares his report, a man impeccably dressed introduces himself as the new transfer. Chief Nam, together with the other officers, expresses his surprise with the unexpected arrival of Han Ju Won (Yeo Jin Goo). He explains that he came in advance to get a feel of his new work environment.

The other officers immediately find out his elite background and wonder about his reason of working at a substation. Turns out Ju Won is actually on a mission tied to his job at the Foreign Affairs Office and somehow related to the crimes in the town of Munju. 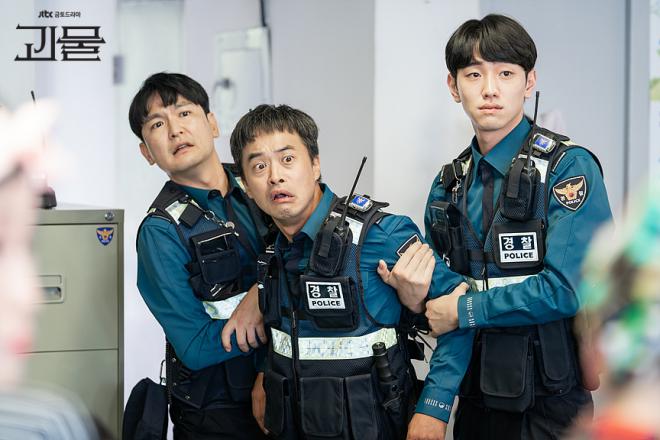 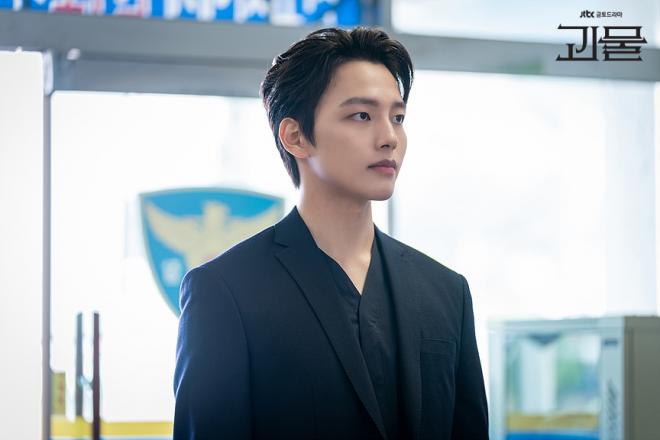 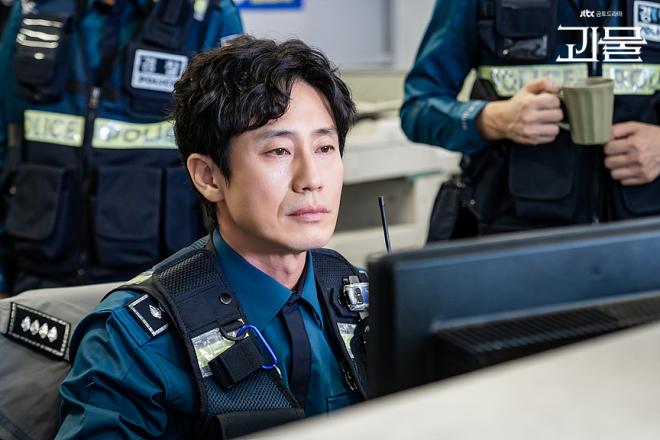 The cadaver in the reed field

Dong Sik immediately notices that Ju Won has an idea of the identity of the dead body they discovered in the field. He asks him about it but Ju Won did not address his question. As they wait at the recording room of Munju Police Station, Dong Sik questions Ju Won once again. This time, Ju Won answers with a question if it was Dong Sik’s missing twin sister.

Officer Oh Ji Hwa arrives, verifies things on their written reports and then eventually lets them go. Dong Sik is now aware that Ju Won is suspecting him about his sister’s disappearance. Ju Won meets with his father and reveals that Ju Won really knows whom the body in the field belongs to – the woman he used as bait for his investigation. His father tells him to keep a low profile and to stop investigating the 20-year-old crime.

Munju residents can’t help but talk about the dead body in the field as they keep on speculating about its identity. Meanwhile, Dong Sik seeks the help of a former colleague and advises him that he has no information about the remains. The owner of Manyang supermarket, Kang Jin Mook, visits and takes care of Dong Sik’s mother at the hospital. He tells Dong Sik that his daughter is not answering his calls and has not gone home for he believes she is busy with schoolwork.

Dong Sik tries to call her but he too receives no answer. He later finds out through Oh Ji Hun the location of Kang Min Ju. He takes Kang Min Ju back and lets her sober up at the station. That night, as Kang Min Ju sneaks out of the station, Dong Sik calls her. She tells him that she is already home, but Dong Sik admonishes her for lying as she left her keys back at the station. Dong Sik’s arrives to meet friends in a get-together at the Butcher Shop’s restaurant. They rib him for doing a fatherly duty (arriving late to give Min Ju her keys back), but he seems bothered and not himself. 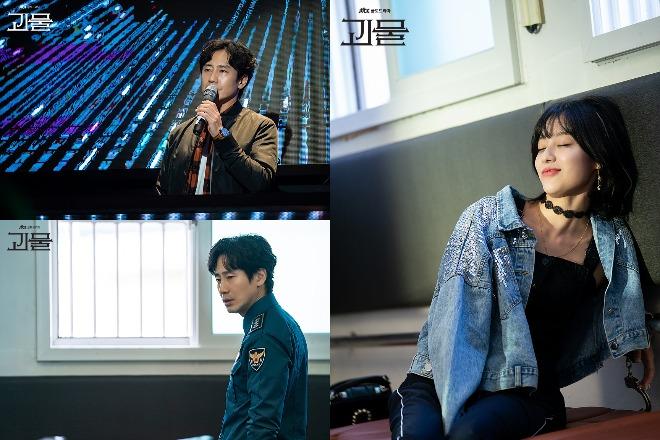 Dong Sik arrives home to find Dae Hoon waiting for him inside. He asks him where he went after they all separated as he thought he would go directly back home. Dong Sik says he runs a lap but Dae Hoon notices him not wearing his running shoes. He also tells Dong Sik he plans to sleepover, but the house is too cold. Dong Silk says the boiler is not working. Dae Hoon offers to help him fix it, but his friend refuses. Dong Sik tells him there is no light in the basement. Dae Hoon acquiesces and decides to go home instead. Before leaving, he tells Dong Sik that Han Ju Won finds out about the missing pages on the Bang Ju Seon report case.

After Dae Hoon left, Dong Sik goes to the basement, revealing that he has the files. The next morning, as Dong Sik walks out of his house, he notices Ju Won’s car. He asks him why he is in his neighborhood. Han Ju Won tells him he is actually looking for a house as he plans to move in. Dong Sik offers a tour but when they arrive at Manyang Supermarket, they see something laid at the table outside. Much to their horror, ten fingers, showing the nail art on Kang Min Ju’s nails, are lined up. Dong Sik is clearly devastated and starts crying as Ju Won looks on with his hand on his phone, about to call the station.

The previous night, a man dressed in black with a hoodie carrying a plastic bag arrives at Manyang Supermarket. As the neighborhood sleeps, the man starts to place the fingers and it shows the man is Lee Dong Sik. 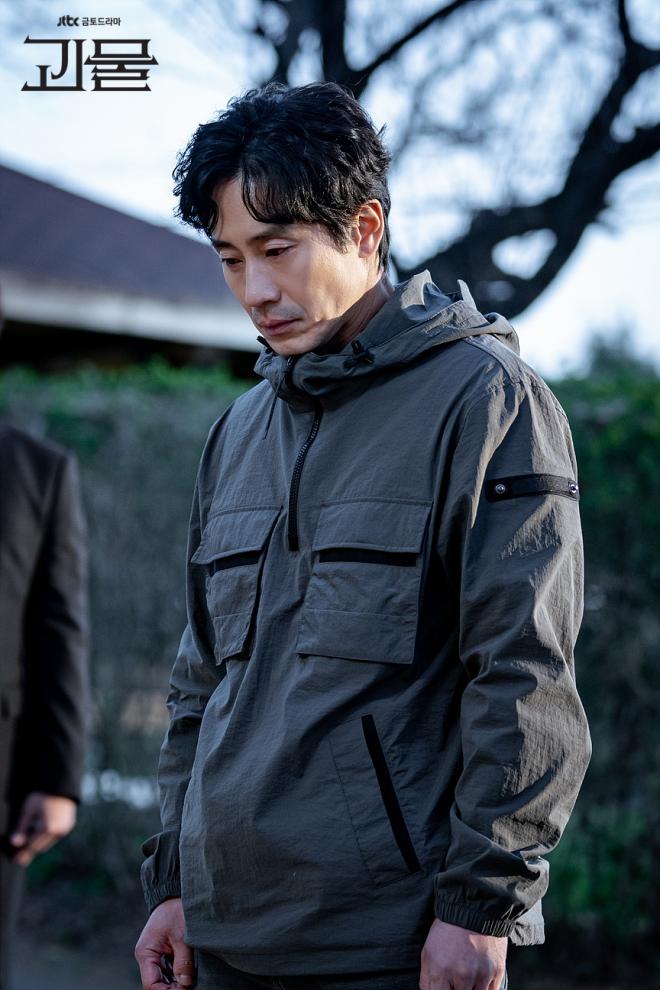 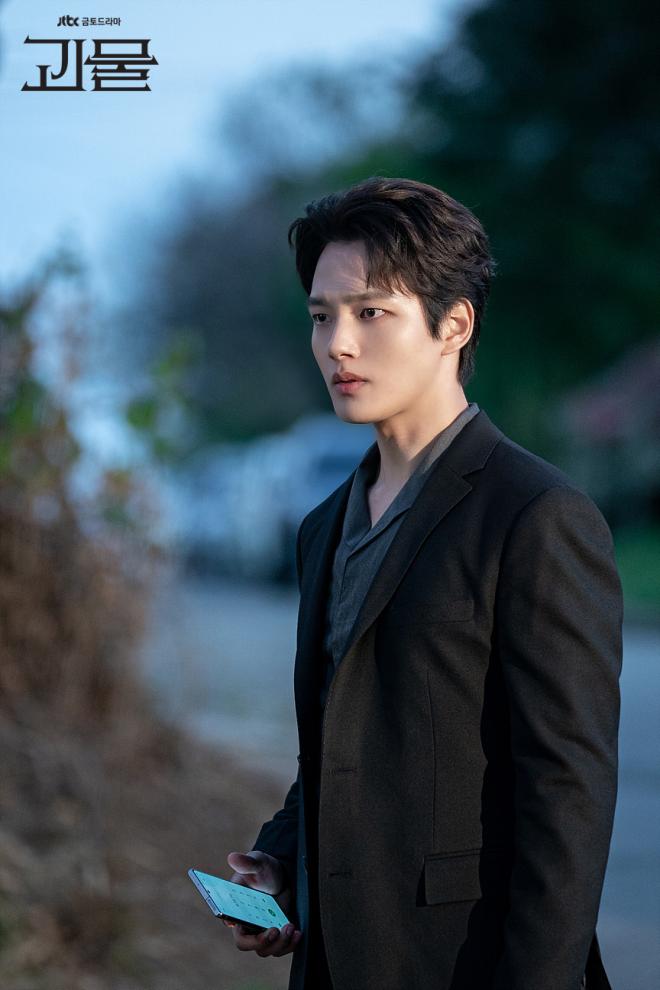 Beyond Evil has its own way of captivating the audience and making them curious as to what would happen next. The premiere week was not as explosive as I would like for a psychological drama. However, the series does have its own merit and allure.

The casting is superb and that is really a plus. Shin Ha Kyun has perfected the flawed, emotionally, and psychologically scarred characters he played in the past and it still is true here in Beyond Evil. I love how he makes me question every action Dong Sik does. One moment he is the good-natured Munju native, willing to help and sort residents’ problems. Then here comes tidbits from his past as well as how his colleagues see him that will make you think that perhaps, he really is the monster people say he is. I get where Ju Won is coming from suspecting him of the crime even though he sees him do kind things. 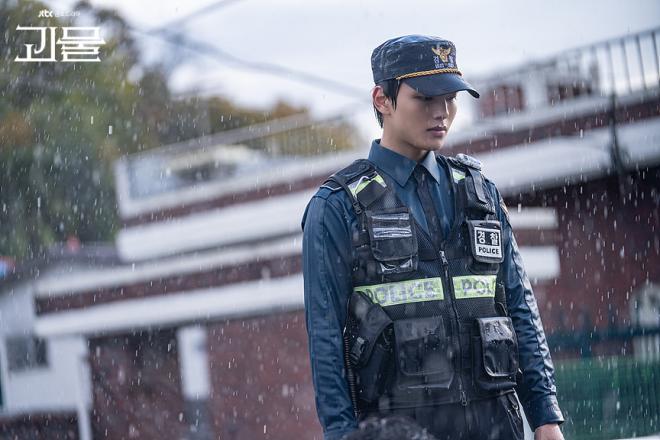 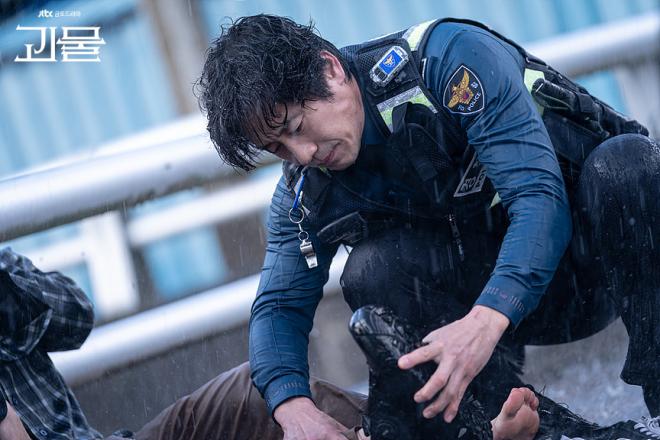 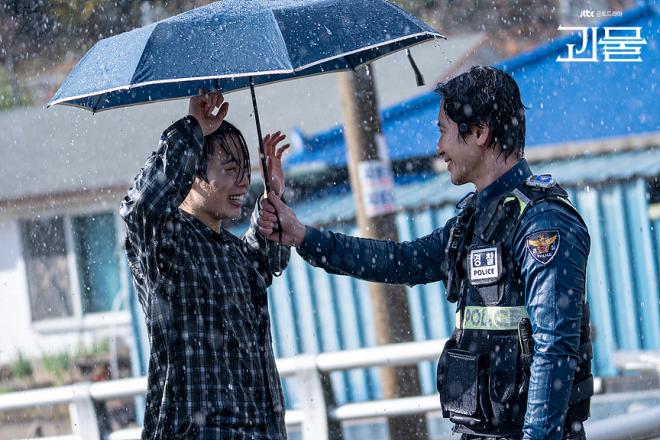 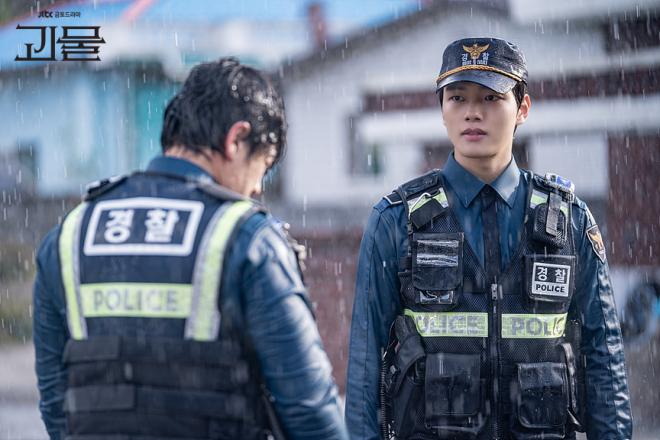 As for Yeo Jin Goo, I have always admired him and loved every role he plays (regardless of the material). This actor can just sit there, do nothing and I would still watch (cue fangirling mode here). This goes without saying that I also love him in his role in Beyond Evil. The play of emotions on his face is so fascinating to watch that I can’t help but feel every bit of it. He nailed that frustrated young man who is trying to overcome expectations and get away from the shadow of his father. He tries to be a good son, but it is clear he has a rebellious side. His no-nonsense attitude is a product of that stubbornness he tries so hard to rein in.

Beyond Evil started slow and quite dry (for my liking). I was glad when it drew my interest halfway through the first episode. It became engaging when it provided an insight into Dong Sik’s past and how his sister’s disappearance continues to haunt him. Viewers got to see a glimpse of what influenced Lee Dong Sik which somehow explains his overall behavior. The drama has a lot of suspicious characters and situations that clearly serve as red herrings. So far the writing is stable and the conflicts waiting for resolutions, combined with its great cast, are enough reasons to anticipate for what comes next.

Beyond Evil airs on Friday and Saturday on jTBC at 11 PM KST. A few hours after its Korean broadcast, new episodes are available for streaming on Viu.