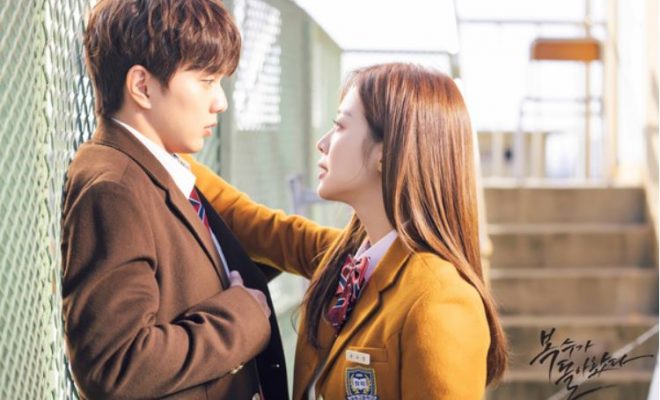 My Strange Hero makes its much-awaited debut this week.

Versatile leading man and highly capable actor Yoo Seung Ho has embarked on his second romance drama, albeit a bit darker this time.

Bok Soo stops a wedding and runs away with the bride. He dodges punches and valiantly leads the bride to … a waiting van. It turns out that he runs an errand service with his friends, and the bride paid them to get her out of her own wedding.

Meanwhile, Soo Jeung is also at another wedding of a co-teacher. She is disappointed when he tells her that she didn’t get the permanent teacher position, and remains as a contractual teacher. Pissed off, she eats enough steak to gain her revenge on the erring groom.

In the midst of all these, Bok Soo sees a clueless Soo Jeong for the first time in years. He stops dead in his tracks as soon as he sees her, watches as he passes her, but she never even looks up.

Back to Where It All Began

The scene changes as a cocky and confident high school student Bok Soo saunters down the road. We travel back in time to see as he flashes a charming smile, and his red Converse sneakers glisten in the sun. He is popular and the girls are crazy all over him. He has the worst grades in his class, but his teachers treat him affectionately.

Except for the Class President Soo Jeong.

The perfect girl with the highest grades and the class heartthrob and troublemaker are paired up for an important class project. Despite his efforts to avoid working, Soo Jeong tracks him down and forces him to cooperate. He’s stunned that she’s tough and cocky, and not a goody two-shoes everyone thinks she is. But her efforts pay off because he works hard and finishes the project. It’s true what they say that opposites attract. The pair soon fall in love.

Overcome the Past to Move Forward

Soo Jeong and Bok Soo have grown up and apart. From being the class president and resident overachiever, she is now struggling to get a permanent position. Unable to gain control over her life, she gets conned and loses all her family’s money. Desperate, she jumps off a bridge accidentally, bringing with her the missing student she failed to counsel.

But Bok Soo is there to save her. She wonders why she sees him in the last moment of her life as she struggles to breathe. Their paths meet again for the second time in their adult life.

In the meantime, grown-up Bok Soo is still really well-loved and popular because he is warm-hearted. He takes on different jobs with his friends, running away with a bride, jogging with a fat husband, doing a mukbang for a starving rich woman, dating a lonely woman beside the river – you name it, he’ll do it.

He saves Soo Jeong when she fell into the river, but refuses to meet her after because he grew up with a grudge against her.  Bok-soo can’t move on from the past and can’t forget what happened. It’s so bad that he can’t even face the direction of the school.

Oh Se Ho, Bok Soo’s “victim” – from the rooftop incident from when they were in high school – returns to Korea. He is all set to take over as the Chairman of Seolsong High School from his mother. He wants to get Bok Soo back in school after he wins the Brave Citizen Award because he saved Soo Jeong and her student.

Se Ho meets Soo Jeong, and asks her to help him again. Soo Jeong reacts when he says “again”. Unknown to them, Bok Soo overhears everything. He knows Soo Jeong will get the permanent teacher position if Bok Soo comes back.

Bok Soo finally agrees to return, but he has a threat to them all:

She ruined my life, I’ve been living quietly without grudges. They’re still trying to do what they want with my life. If you’re going to play with my life like this, I will play with you for good.

Watching the pilot episodes made me very happy. Yoo Seung Ho will always be my bae, and his bright smile and beautiful eyes give me reason to live. His visuals in every scene he’s in just about steals the show. And the writers know this too, because they keep using his visuals in his scenes. LOL.

I loved his cocky confidence in the first two episodes. He seemed very sure of himself and contented with his life. While watching the first episode, I couldn’t help but wish the happy and fuzzy feeling of first love would remain throughout the drama. But knowing the premise of the show, I knew it wouldn’t last for long.

I also love the cast in this show. Jo Bo Ah is GORGEOUS. She is offbeat and tough, her beautiful face is a direct contrast to her tough attitude and potty mouth. She blends well with Seung Ho, and their chemistry is off the walls.

So far, the past is slowly being revealed through flashbacks. It’s apparently a love triangle, and Se Ho falls off the roof, but he then accuses Bok Soo of pushing him off. We don’t know why yet, but Soo Jeong also testifies against Bok Soo.

Kwak Dong Yeon is another welcome addition to the cast as Oh Se Ho. My favorite sunbae from My ID is Gangnam Beauty, I’m excited how Dong Yeon will portray the villain in his new drama. In the pilot episodes he’s doing fine so far, arrogant and feisty. He’s beautifully coiffed and moves elegantly, but there’s a steely gaze in his eyes.

My favorite omma, Kim Mi Kyung, fresh from Grand Prince, is back in this drama as well as Bok Soo’s mom. She acts all tough, but defends her son to the end. She’s thoughtful by bringing food to Bok Soo. She’s exactly the kind of mom any child would want to have.

I can’t wait for next week’s episode for my weekly dose of Yoo Seung Ho. 🙂

Fans can watch My Strange Hero on KPLUS within 24 hours from its Korean broadcast. It airs on SBS every Monday and Tuesday.