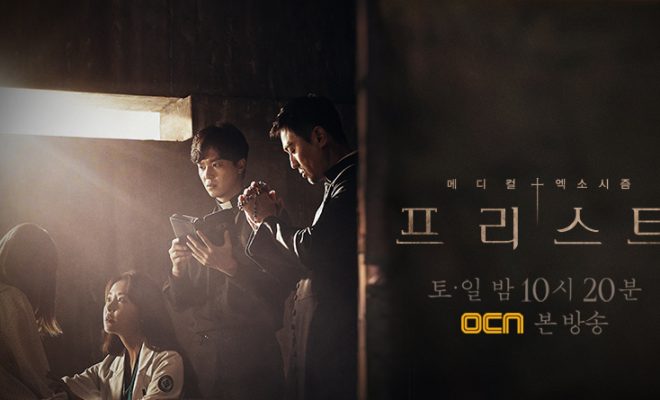 Horror genre fans has another reason to stay in on weekend nights as OCN’s Priest takes a deeper look at exorcism and possession. 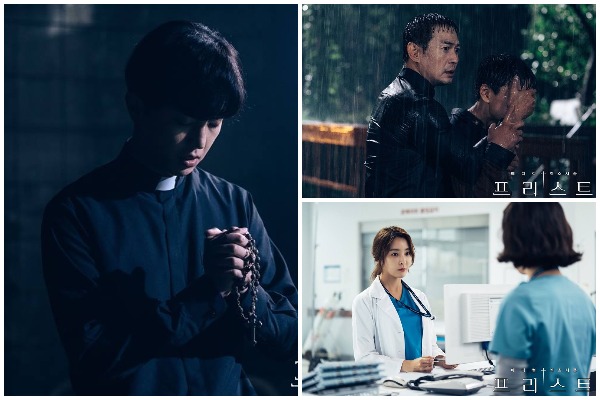 Summer of 1999, a boy witnessed his mother’s possession that took her life. Nearly 20 years later, the same boy has become an exorcism priest. Together with an older priest, both are dedicated to fight and win against evil forces.

A boy, Oh Soo Min (Yeon Woo Jin), argues with his father regarding his mother as a group of people tries to restrain her. He says that there is something inside his mother that doctors don’t see. His father tells him to shut up and stay in his room. Frustrated over his father’s denial, he sets off to seek the help of Father Moon (Park Yong Woo). As they arrive, Soo Min’s father blocks their way despite the priest’s plea. As they argue, Soo Min’s mother jump off the window. Stunned, the three of them watch as Soo Min’s mother sits up. For a moment, his mother returns to normal, but eventually the entity takes over and claims his mother’s life. 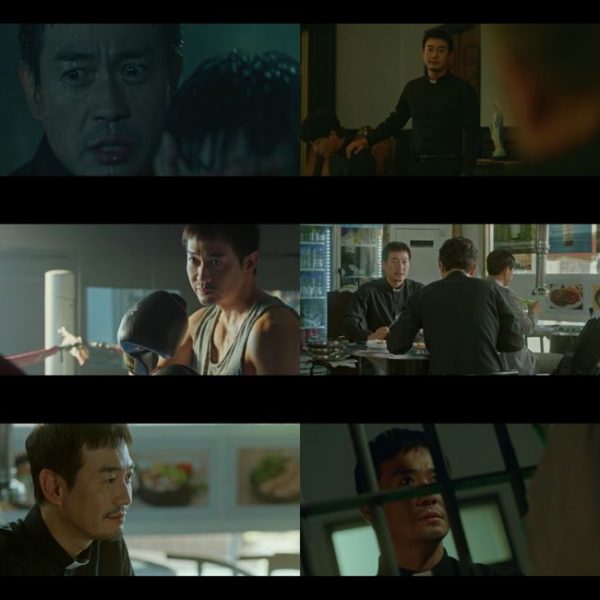 Fast forward to present day, Oh Soo Min is now a priest. Father Moon takes him under his wing, and as the two are eating together, Father Moon receives a text message that makes him turn on the TV. As they watch the news about a former priest who stabbed a 10-year old boy, Father Moon leaves.

At Southern Catholic Hospital, the doctors are frantic to save the boy’s life. Dr. Ham Eun Ho (Jung Yu Mi) performs a surgery despite the lack of consent from the guardian. However, due to excessive bleeding, the boy flatlines. Dr. Ham is about to tell the boy’s mother when the lights go out. The moment the power is back, the nurse is surprised to see that the boy’s heart is beating. This baffles the entire team as the boy clearly dies. In addition to boy’s apparent resurrection, he is also recovering fast. In a day after his revival, he is already out of the ICU and transfers to the regular ward. 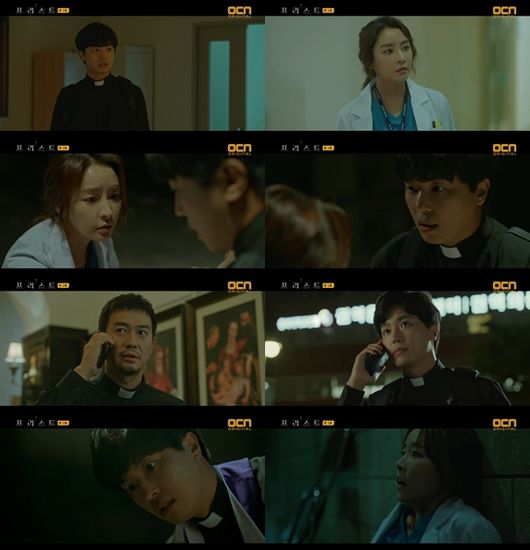 Meanwhile, Father Moon visits Father Jeong who is incarcerated and he discovers that the boy is possessed by a spirit. Both priests have previously encountered this entity. Father Moon asks approval to perform an exorcism, while Oh Soo Min goes to the hospital to check out the child. He finds out that the boy is missing and tries to find him. Oh Soo Min finds the boy in an abandoned part of the hospital near the funeral home. He tries to perform an exorcism, but Dr. Ham arrives. The boy returns to normal and Dr. Ham calls for security as Oh Soo Min runs away.

Oh Soo Min is sure that the boy is possessed so he tells Father Moon that an exorcism is necessary. Father Moon tells him to stay put and wait for the Vatican’s approval. Oh Soo Min becomes impatient and kidnaps the child. He sets up an exorcism room in another abandoned part of the hospital. Dr. Ham finds the room and sees the boy’s transformation, but she still refuses to believe. The boy passes out and his wounds bleeds. The doctor takes over and the boy is returned to his hospital room. 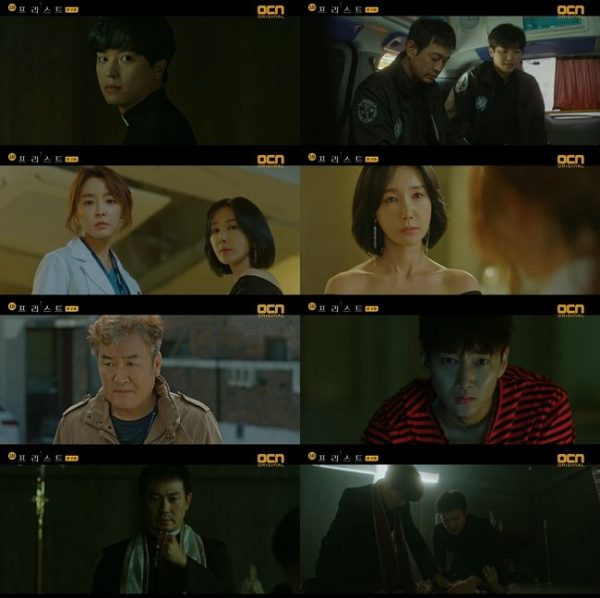 Oh Soo Min gets scolded by Father Moon but the video recording proves that something is inside the boy. Father Moon receives an order to perform an exorcism, but it remains unofficial. Father Moon speaks with the boy’s mother and they learn that the boy has displayed odd behaviors prior to his encounter with Father Jeong. His parents seek Father Jeong’s counsel and help since he is a former exorcism priest. The mother approves the exorcism when she learns that Father Jeong died inside his cell. They plan to take the child to place away from the hospital. 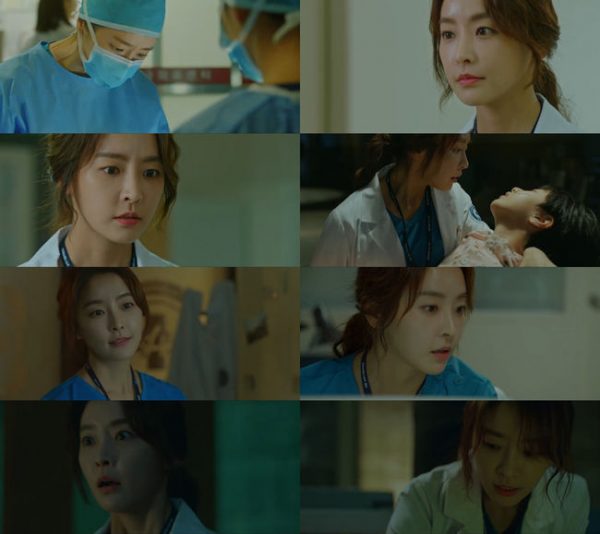 Dr. Ham’s superior tells her the patient’s mother wants to transferred to a different hospital. She volunteers to assist the transfer. The ambulance purposely leaves them, and she catches on what is really going on. She trails the ambulance and it stops in a business building. She and another doctor go in and searches the place. Inside, Father Moon and Oh Soo Min are in the process of exorcising the boy when Dr. Ham Barges in. Fortunately, the exorcism is completed before she can interrupt them. Inside the car, the boy is back to his normal self and doesn’t seem to remember a thing. 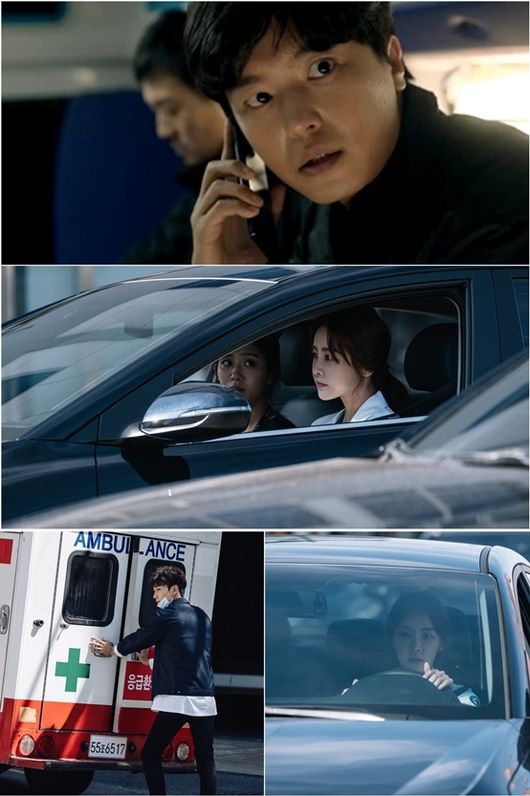 Dr. Ham asks the boy’s mother if he is going to do something about the abduction and the priests. She hesitates to answer, and Dr. Ham realizes that she is aware of the whole thing. She tells the doctor that there are things which are hard to explain, but it does not mean they don’t exist.

Oh Soo Min wonders how the spirit knows his given name and Father Moon tells him to stop thinking so much about it as it is what evil spirits do. Father Moon instructs Oh Soo Min to go back to the hospital as he is convinced it is not yet over. He wants him to sprinkle holy water on every doorknob and refrigerator and he is doing it alone because he needs to go somewhere. He goes to Father Jeong’s house and as he questions why it is him, he turns around and sees the blood forms a numerical pattern, the same pattern that is in Oh Soo Min’s necklace. 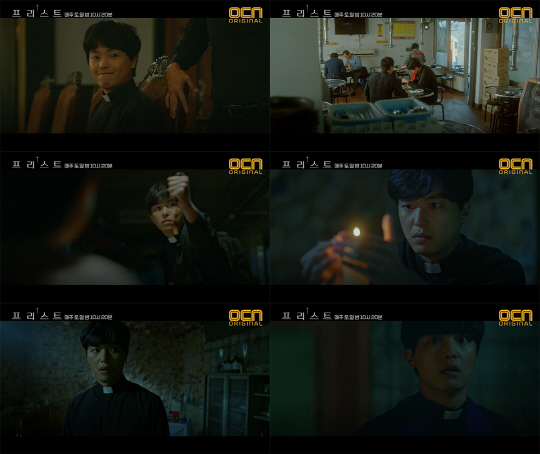 Dr. Ham researches about exorcism and notices that Dr. Song seems tired.  She advises her fellow doctor to take a rest. She agrees and as she sleeps on the sofa, roaches start to gather, and some come out of her ear. Clearly possessed, the doctor gets up and is about to strike Dr. Ham with a lampshade.

Priest is shaping up to be a good addition to your weekend drama binge. Even non-horror fans will find it an interesting drama to watch. The frightening scenes are toned down enough that even people who gets scared easily will survive watching the show.

The opening scene where Soo Min witnessed his mother’s possession and demise, laid the groundwork for what this drama is about. The first week of the Priest offered little information on the characters and focused on possession. This is not a bad thing as I am sure we will get to know the characters a bit more as the story progresses.

Also, the entity identified Oh Soo Min by his given name, which makes his character more intriguing. Father Moon and Dr. Ham knew each other, so there must be a story behind that as well. Surely there are still scarier scenes coming up, so we just have to brace ourselves.

Apart from the horror premise, what stood out for me is the combination of Science and religion. From the first week, the Priest has established the clash between these two concepts and how they can complement each other.

It is safe to say at least this moment that Priest has lived up to its hype. It is frightening though the premise is interesting. OCN seems to master the art of scaring its viewers and you can count on its Priest to deliver.

Priest airs on OCN at 10:20PM every Saturday and Sunday.

FacebookTwitter
SubscribeGoogleWhatsappPinterestDiggRedditStumbleuponVkWeiboPocketTumblrMailMeneameOdnoklassniki
Related ItemsJung Yu MiOCNpark yong wooPriestrecapYeon Woo jin
← Previous Story K-Drama Premiere: “A Promise To The Gods” Challenges To Define Morality When Saving Loved Ones
Next Story → K-Drama Premiere: “Memories Of The Alhambra” Maneuvers An Exciting Plot That Is Not Afraid Of Being Ambitious