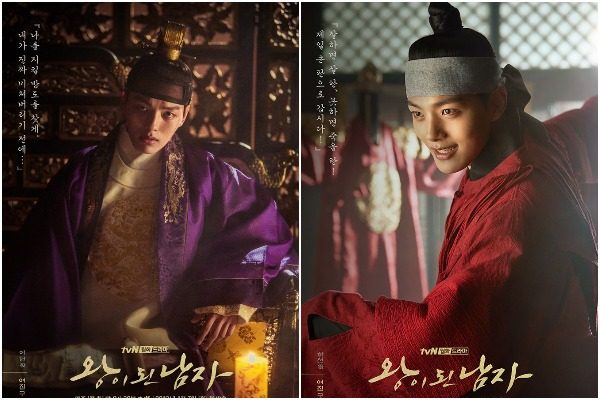 The drama tells the story of a King whose rule is surrounded by power struggles and unrests. To escape the assassination attempts on his life, a clown who looks exactly like him is placed in his stead. As the clown assumes the King’s role, he discovers the gravity of the situation. He is also learning that having power can truly make a difference.

A young prince is crying on his father’s deathbed as the Crowned Prince Yi Heon (Yeo Jin Goo) looks on. The dying King urges him to come closer and he expresses his doubts about the ability of the prince to rule. He says that the thought of the Crowned Prince ruling the kingdom he tried so hard to protect will not make him rest in peace.

The King wants the Crowned Prince to promise he will take care of his brother, but the Prince mocks him and says that is not the way to ask for a favor. Summoning the last of his strength, the King raises himself and tells the Prince he will watch over him to see how he will govern his subjects and dies. 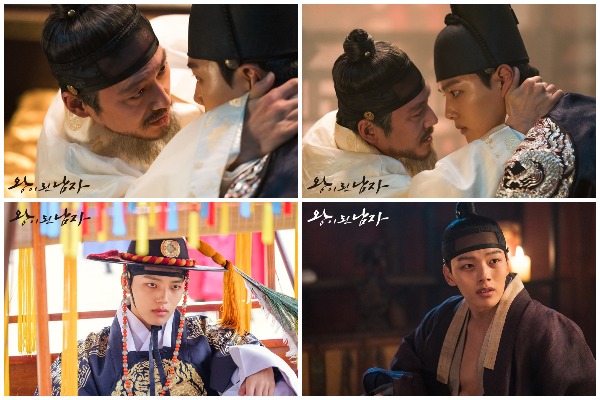 In a place far from the palace, a group of entertainers are putting a show about the current ruler. At the same time, palace men tortures a prisoner in front of the King. Shin Chi Soo asks the prisoner to name the leader of the conspiracy against the monarchy. He tells them it is the grandfather of the young prince.

The King orders the grandfather’s arrest. He visits his incarcerated younger brother and tells him he will be sending him to a place from the palace and he will see him there soon. Not knowing it is going to be last day he will get to see his older brother; the young prince accepts the decision. Upon arrival, the prince eats food laced with poison and the unsuspecting child dies.

King Yi Heon rewards The Vice Minister of War, Shin Chi Soo, handsomely for his participation in identifying the conspiracy leader and elimination of the threats to the throne, much to the dismay of most palace officials. 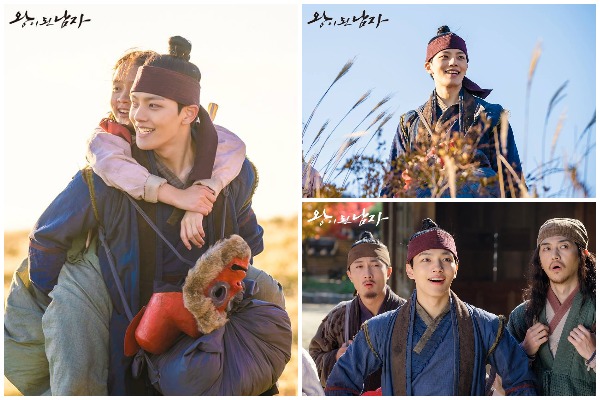 Meanwhile, at the end of their performance, the clown finally unveils his face and it resembles the King. The lord refuses to pay the group for their performance. In retaliation, Ha Seon (Yeo Jin Goo) breaks a few jars. His Uncle Gab Soo exclaims that his action ruins their reputation because no one will want to hire them now to perform. The group travels to Hanyang where Ha Seon finds out that mocking the king for entertainment is old, and the Queen’s jealousy and treatment of the King’s concubines are now the trendy topic.

The King is having trouble sleeping, and in his dream, he sees his dead brother asking for his help. He awakes from his dreams and sees shadows outside his room. The assassination attempt is a failure. As the King demands for the name of the traitor, the assassin tells him that if there is a traitor in the palace, it is not them but the King himself.

The prisoner continues as he tells that he stole the throne from the rightful heir. The prisoner also states that he killed his father and brother. The King, out of anger and guilt, kills the prisoner and wields the sword multiple times against the lifeless body. He orders his men to torture the remaining prisoner until he gives up the name of the person behind the assassination attempt. 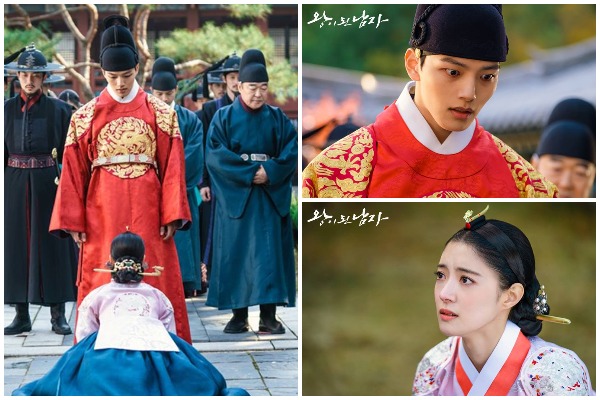 Shin Chi Soo talks to the prisoner to name the Queen’s father as the person behind the attack. The Queen tries to talk to her husband about her father. She says that if he believes her father is capable of such thing, then he might as well punish her and remove her in the palace. The King gets angry and admonishes her. He doesn’t want to hear any talk about her father and warns her not to blackmail him again.

The King continues to unravel, and his paranoia is getting worse. He talks to his Chief Royal Secretary to find solution to his dilemma as soon as possible. The secretary visits a brothel where Ha Seon’s group is performing. He gets mad when he realizes that the show is making fun of the Queen. He confronts the performer. The Chief Royal Secretary sees Ha Seon’s face and instructs the men to lock up Ha Seon, and not to let him out without his permission. 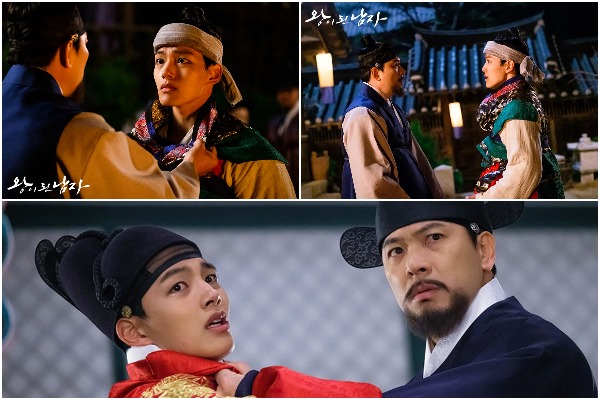 King Yi Heon is in the middle of his fit when the secretary enters his room. He orders all the maids to get out. Ha Seon is then brought to the palace and in front of the King. Both are surprised when they see each other as the resemblance is uncanny. The King immediately gives his wardrobe to Ha Seon and leaves the palace. Chief Royal Secretary and the King’s Eunuch convince Ha Seon to pretend to be the King. The secretary offers him a reward that will ensure a good life for him, his sister and uncle. Because of the reward, Ha Seon accepts.

Ha Seon, without much preparation for the role, spends a day assuming the King’s identity. For the most parts, he is able to fool the people in the palace, but the Eunuch continuously warns him to repress his smiles and to tone down his cheerful demeanor. He makes a mistake when he granted his permission to execute his father-in-law. The Royal Secretary gets mad, but Ha Seon reasons out that it was the Secretary’s fault. Ha Seon reminds him he was the one who says to give approval if someone asks for permission. 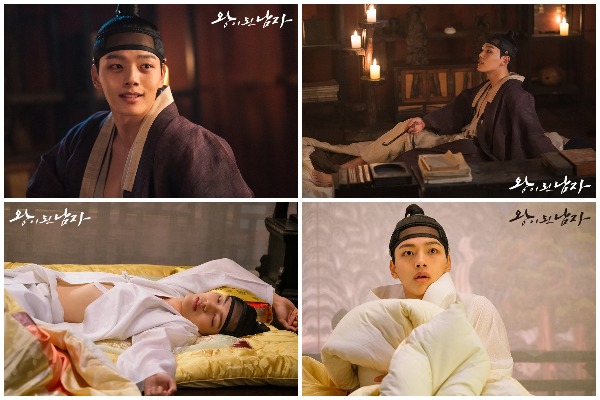 Queen So Woon goes to talk to the King and tries to end her life. Ha Seon, clearly moved by the Queen’s action and feeling guilty, promises her that he will not harm her father.

The true King hands out his decision to remove Lord Yoo from office and to execute. Ha Seon, remembering his promise, relays the order but changes the execution part to imprisonment in exile. He also asks a way for the Queen to see her father off. Ha Seon forms a friendship with one of the younger maids as she reminds him of his sister. The young maid starts to relax around the King and tells him the story of how she ends up in the palace. He offers one of his snacks to the maid without knowing it is poisoned.

Ha Seon is clearly devastated and wants to be out of the palace. The secretary prevents him from leaving, but he sees an opportunity when Queen So Woon visits to comfort him. He goes back to the courtesan house and discovers that Lord Shin Chi Soo’s son assaulted his sister. He goes to the Lord’s house only to be insulted as Shin Chi Soo orders his man to pay him the same amount that they pay for a dog in the market.

As the Lord’s men are beating him, Ha Seon keeps yelling that his sister in not a dog. Meanwhile, Chief Royal Secretary is looking for Ha Seon. A man informs him that the King has returned to the palace. Ha Seon pleads with him to teach him the way to crush someone in order to survive.

It was a good premiere week for The Crowned Clown. The first two episodes were loaded with enough actions and intrigues. A lot had already happened in the first week, but it did not overwhelm. The drama got right into the main conflict but still leaves room for a few mysteries. The story’s pacing is fast but also effective as it did not drag out the switch. It actually happened at the end of the first episode. The introduction of each character was done well as it provided viewers an immediate glimpse on who the major players are.

Yeo Jin Goo gave stellar performance as the paranoid King and the exuberant clown. The contrast in the two characters are clear, and the young actor is clearly able to deliver. I love how complex, crazy and volatile he is as King Yi Heon. There is certainly more to his character as a flashback scene with Queen So Woon showed a softer side of him. Something must have happened that make him the way he is now, and I am eager to find out.

As the cheerful and good-natured Ha Seon, Yoo Jin Goo captivates with his wide smile and innocent eyes. He has a certain naivete that is refreshing, and you can clearly see that even though life as jester is not easy, he’s still untainted with the harsh realities of life. 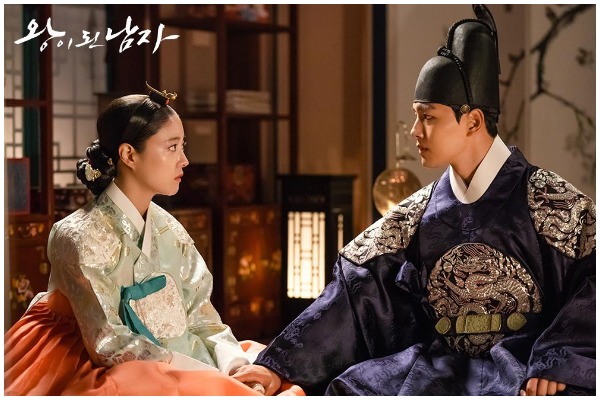 Although uneducated and naive, Ha Seon still has a mind of his own. He knows how to keep his promise and he has the courage to defy a rule he deems unjust. People with hidden agenda are bound to notice the difference and this would create another interesting conflict. Even the Queen is starting to warm up to the King, when she constantly rebuffs Yi Heon.

Now that Ha Seon has an agenda of his own, and the longer he gets exposed to the complicated world that is the palace, I am curious to know what this will bring and change – both to his mindset and personality.

With great acting and steady pacing, the drama is shaping up to be a worthy addition to your historical drama binge-list.

Watch A Crowned Clown on tvN every Mondays and Tuesdays at 9:30PM.