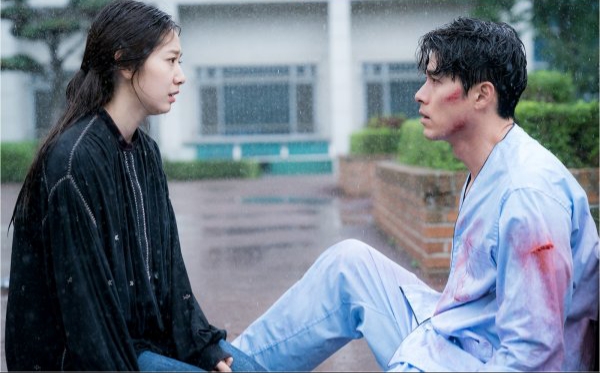 Game fantasy crosses the reality of the hero in episode 5 of Memories Of The Alhambra.

Continuously keeping viewers at their wit’s end, Memories of the Alhambra is proven to be an amazing feat for a series.

Hyun Bin and Park Shin Hye have been serving a superb weekend drama that it’s impossible not to include it on fans’ weekly routine now.

Following the gripping events of the mysterious death that befell Hyung Suk while playing the game with Jin Woo (Hyun Bin), the latter faces an impossible idea that he himself struggles to understand.

Debating if she will give a thicker blanket to Jin Woo, Hee Joo changes her mind and continues packing things up.

Just then, she receives a call from Jin Woo’s second wife demanding to put the latter on the phone. She goes up to where he is, but stops midway when she sees him wounded on the floor.

Jin Woo is rushed to the hospital and luckily survives the fall with no head trauma, but his crushed leg won’t be the same anymore.

Jin Woo wakes up to the touch of Hyung Suk’s father’s hand. A flashback reveals how the two friends separated ways after founding a progressive start-up business. Their friendship turned sour with Hyung Suk’s father siding Jin Woo. It was also during that time when his first wife married Hyung Suk.

Ruminating on his accident, Jin Woo ponders on how the wounds he got from Hyung Suk seems real. He learns from his secretary that he was not wearing the lens when he had the accident.

Hee Joo and her sister tend to Jin Woo. Upon knowing that his second wife is on her way to where he is confined, he orders her to help out in not meeting her.

Just then, he hears the rain, thunderstorm and the guitar melody of Memories of the Alhambra — the AR game is activated without his lens and Hyung Suk emerges in front of his hospital room. Hee Joo appears prompting the game to halt because of an obstacle. The duel will be cancelled as long as the obstacle is on.

But Hee Joo spots Yu Ra, the second wife, so she creates a diversion. Just then, a patient wrongly enters Jin Woo’s room in the dying seconds of the timed duel. Hyung Suk advances to attack him so he runs away with his injured leg.

Stay for a moment

Hyung Suk follows Jin Woo and is about to swing the final blow that will kill him in the game (that might perhaps transcend in real life).

But Hee Joo appears to block the path, ultimately protecting him. She is about to call for help but Jin Woo reaches for her and pleads to stay for a minute until the game fades.

In flashback, Jin Woo who is getting the hang of the game, slowly realizes how the game is crossing his real life. He hints on how the chase he is experiencing might be the same fate the game developer also experienced.

Memories of the Alhambra Episode 5 Afterthoughts

Getting my Memories of the Alhambra weekly fix keeps sending me to an exciting oblivion. Does Jin Woo’s hint on what possibly happen to Se Joo real? I hope not. If the game developer is also trapped inside the game, how else will things work well the hero? Hopefully he is not dead, just unconscious and needing an ally or a game healer to continue with the game.

How does the game achieve its reality crossing premise? Is it some sort of a wormhole? How is it activated? All we know for now are the triggers that signal the game is about to happen. Just like what we saw with Jin Woo and the day Se Joo disappeared.

Now, I am curious on what Hee Joo’s game character function will be. I am curious about a lot of things to be honest. But the series is very strict in how it wants to kill me with anticipation on what’s bound to happen.

Fortunately, given its imaginative premise, Memories of the Alhambra has an array of options to keep the flow of the story moving. That includes neatly polishing the conflicts it has so far presented. Because they had to. Because a clean finish is what we need in such a creatively designed series.

Fan can watch Memories of the Alhambra on Netflix.