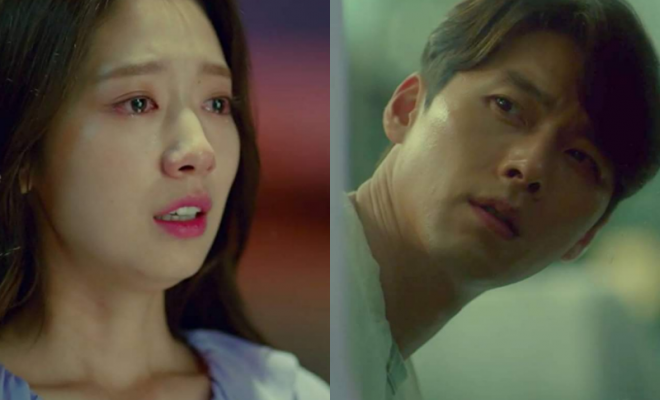 Granada setting arc officially ends in episode 6 of Memories of the Alhambra.

After taking us to an exhilarating drive in the past three weeks, Memories of the Alhambra has simmered down while solidifying the approaching love line in the future episodes.

By now, viewers have become aware of the rules of the AR game, along with its mysterious glitch that has been haunting the hero of the story. All main characters have also made their presence known in the narrative.

The world only Jin Woo can see

Owing his life to Hee Joo, Jin Woo is rushed back to the hospital muttering a faint “I’m sorry” to his ex-bestfriend’s father, Professor Cha. Despite the police findings of probable foul play which points to Jin Woo’s fingerprints, Professor Cha refuses to proceed with an autopsy, and had the cryptic death of his son be swept under the rug.

Doctors overseeing Jin Woo’s treatment conclude his hallucinations are coming from the post trauma of his fall. With his broken leg and battered body unable to sustain strength for game duels with Hyung Seok that keeps ensuing, he goes to enclosed spaces to protect himself.

Upon learning of his second wife’s presence in his room, he sneaks out and drives to Hostel Bonita to get his game lens back. While waiting for Hee Joo to get it, he shields himself inside the car as Hyung Seok’s game wraith again appears.

Hee Joo insists on accompanying him to where he is heading which is a game weapon store. She calls the owner of the store to no avail so he forces his way in by breaking the glass door. Transforming to show an array of game weapons, at level 4, Jin Woo purchases a dagger and fairy ninja’s star. Practicing on throwing the ninja star, Hee Joo reports to Jin Woo’s secretary, just as the guitar melody hums and Hyung Seok appears again.

Using the door that separates him from Hyung Seok, Jin Woo uses his newly purchase weapons to kill his friend’s character again. He moves another level up and orders Hee Joo to buy any item at the store.

Discovering that he is safe from the hallucinations when he is sedated, Jin Woo agrees to be put on sleep while Hyung Seok and his family returns to Korea.

Jin Woo continues receiving treatment in a house away from his troublemaker second wife. In moments that he faintly gains consciousness, he pleads Hee Joo not to leave him on his own.

When the medicine wears off, he wakes up to the sight of sleeping Hee Joo. He heads out after covering her with a blanket to get some sleeping pills and finds Min Joo playing at the pool.

He learns from Min Joo how he has been clinging on to her sister subconsciously. When he learns that it was Hee Joo’s birthday from her friend, he pushes her to celebrate it with friends.

Not wanting to leave Jin Woo alone, Hee Joo refuses to join her party, but relents when Jin Woo assures her he will be fine.

But as soon as he is alone, the panic attack ensues so he trapped himself inside the glass shower room to prevent Hyung Seok from attacking.

Meanwhile, Hee Joo dolls up to meet her friends but calls to check Jin Woo if he is doing fine. Shoving her away so that she can enjoy her day, he hangs up abruptly. Just when she is about to step out, she receives bouquet of flowers from Jin Woo making up for his early unpleasant treatment.

Secretary Seo finds his boss inside the shower place and receives an order to make train arrangement to leave Granada.

Upon learning Jin Woo’s sudden departure, Hee Joo rushes to the train station, but fails to have a proper goodbye from him. In tears, she stares at the moving train while Jin Woo sadly gazes at her crying face.

Memories of the Alhambra Episode 6 Afterthoughts

For now, we have to park the mystery of how Hyung Seok’s defeat in the AR game transcended to his death in real life. Aside from that, I refuse to believe in the implied status of Se Joo’s character.

Like Jin Woo, Memories of the Alhambra also exhausted me with Hyung Seok’s incessant chase. So I’m glad they know the point when to stop because a week of mini cardiac arrests will really make me seek and kidnap Chanyeol even if he is promoting comeback with EXO right now, to fix the unexplained lapse of the game he created. *grin

I would like to point out how enjoyable the frames of the young actress playing Min Joo and Hyun Bin are. Amidst the gripping mood of the series, their conversations cushions it somehow.

What happened to Jin Woo’s second divorce law suit? Did leaving Granada help in stopping the hallucinations? Will Hee Joo become Jin Woo’s third wife? Is Professor Cha a villain or an ally? (I can’t help but be discriminating based on his evil deeds in Mr. Sunshine and W)

We have a lot of unfinished business and unanswered questions to tackle and anticipate in the next five weeks of the series. I’m a bit scared that the remaining time might not be enough. But I am betting my trust to the talents of the creative team.

Based on the week 4 trailer, the setting will shift to Seoul, and it looks like the halted romantic line will continue from there.

Fan can watch Memories of the Alhambra on Netflix.