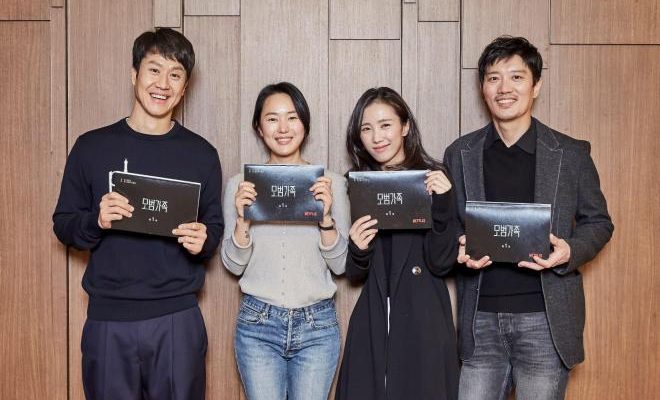 A desperate family man driven to bankruptcy stumbles upon a car loaded with money spins the story of Netflix new series, A Model Family.

A Model Family is a story about a man on the brink of bankruptcy and divorce stumbling upon a car loaded with money. The incident has him crossing paths with the second-in-command of a drug organization. The cast members and director Kim Jin-woo come together to craft this suspenseful story about an ordinary family that is about to fall apart before making a chance discovery of drug money.

Jung Woo plays Dong-ha, the head of a household who becomes embroiled in the dealings of a drug organization. Park Hee-soon takes on the role of Kwang-chul, the organization’s second-in-command who goes after Dong-ha. Dong-ha has nothing left except his family; the ruthless Kwang-chul will stop at nothing for his money.

The two men, each with something to defend, lock horns in a heated conflict expertly portrayed by Jung Woo and Park Hee-soon.

Loved for his wide acting range and engaging character portrayals, Jung Woo convincingly transforms himself into a desperate family man pushed to the edge. He is known for his roles in Best Friend, New Trial, The Himalayas, C’est Si Bon and Reply 1994. His most recent drama Mad For Each Other is also available on Netflix.

Park Hee-soon unleashes his full-on charisma as Kwang-chul, as he did for his roles in The Witch: Part 1 – The Subversion and 1987: When the Day Comes, the JTBC drama Beautiful World and the soon-to-be-released Netflix Series My Name. The synergy between these two actors, who come together for the first time in A Model Family, is much anticipated.

Yoon Jin-seo adds depth to the storyline as Eun-ju, Dong-ha’s wife who is hiding a secret. Yoon has demonstrated strong performances on both big and small screens, with roles in dramas The Girl Who Sees Scents, The Fugitive: Plan B and the films The Moonlight of Seoul, All for Love and Oldboy.

Park Ji-yeon plays Joo-hyun, a team leader of the Narcotic and Organized Crime Investigation Division who investigates Dong-ha and Kwang-chul. Park has received the limelight with lead roles in the musicals Ghost, Rebecca, Laundry and Mamma Mia! before branching out to drama series in tvN’s Stranger Season 2 and JTBC’s Life.

A Model Family is directed by Kim Jin-woo of Suits and Queen of Mystery. Kim has previously collaborated with Netflix on Love Alarm and reunites with Jung Woo after working together on the KBS Drama Special: Chilseong-ho. Production H, the company behind the KBS dramas Homemade Love Story, The Tale of Nokdu and School 2017, is in charge of the production.

With great teamwork led by reputable actors Jung Woo and Park Hee-soon and with the outstanding leadership of director Kim Jin-woo, A Model Family promises to deliver. It will be released to over 190 countries around the world, only on Netflix.