Released on May 30, the trailer depicts two men walking on two train tracks in subdued yellow and blue hues. The scene changes to the rail roads and the men converging. Yoon Shi Yoon narrates – “One Track, Two Worlds Crossing” – further hinting clues about his approaching series.

After that, Yoon in his dual roles appears. One in determined look, the other in murderous glare.

Train tells the story of a man who lost his loved one to a serial killer. Because of that he crosses another dimension to unravel the mystery of his loved one’s death. 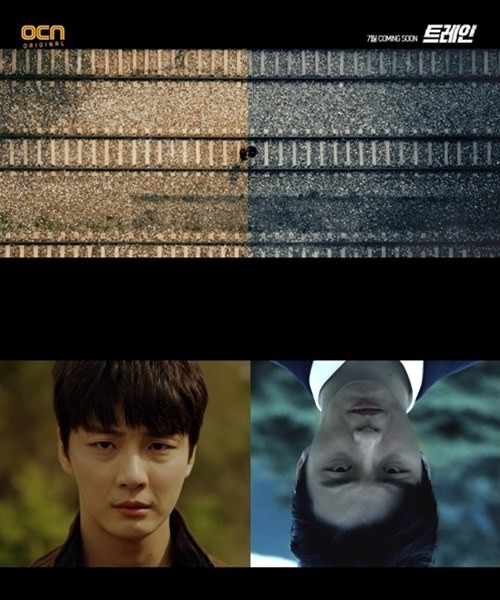 Previously, the skilled actor piqued interest through his voice over participation in the first trailer. Presenting the unique storyline of people with the same faces living in two different world stimulates curiosity.

In the released video teaser, the concept of the series evoke the space-time division into blue and black tones in one frame.

The production team said, “We wanted to express an important key point in the drama through a teaser.” “It is the same person through two twisted parallel worlds. But they are completely different.” They further invite viewers to look forward to the challenging two roles of one actor.

Hellokpop, as an independent Korean entertainment news website (without influence from any agency or corporation), we need your support! If you have enjoyed our work, consider to support us with a one-time or recurring donation from as low as US$5 to keep our site going! Donate securely below via Stripe, Paypal, Apple Pay or Google Wallet.
FacebookTwitter
SubscribeGoogleWhatsappPinterestDiggRedditStumbleuponVkWeiboPocketTumblrMailMeneameOdnoklassniki
Related ItemsOCN TrainYoon Shi Yoon
← Previous Story K-Drama Diary: The Most Mind-Blowing Scenes From “The World Of The Married”
Next Story → Han So Hee Talks About The Changes In Her Life After The Success Of “The World Of The Married”, Future Plans & More