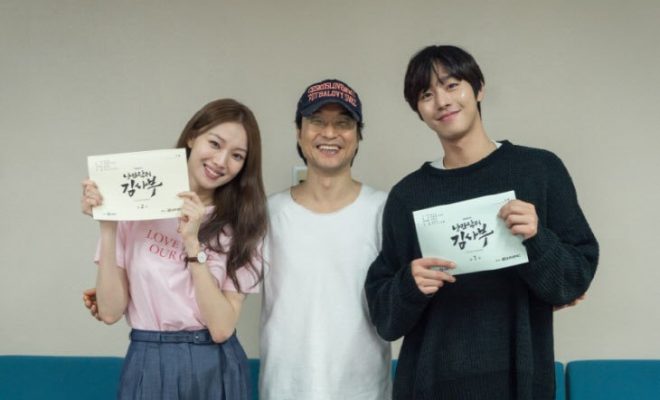 The year 2020 will begin with overwhelming romance as SBS drama Romantic Doctor, Teacher Kim 2 will be hitting the television screens. On December 9, SBS revealed the pictures from the first script reading which showcase the passion and teamwork of the cast members.

The drama tells the story about the people who meet genius doctor Kim Sa Bu played by Han Suk Kyu and find real romance in the process. The second season is expected to be more exciting, have deeper lines, filled with more laughter and heartwarming moments.

All the actors and production crew of Romantic Doctor, Teacher Kim 2 gathered together for the first time in September and proceeded with the first script reading. The first table-read was held at SBS production center in Ilsan.

On behalf of the production team, Han Jung Hwan, director of SBS’ drama department said, “Romantic Doctor, Teacher Kim 2 is a project that I have been wanting to do and have waited for a very long time. I am really excited to be able to start this.” In addition, writer Kang Eun Kyung said, “I am glad to meet the good actors and staff of Season 1 again. I will work hard on the script.” Director of the drama, Yoo In Sik added, “I am so happy to be able to work together with everyone.”

The first script reading began earnestly with applause from all the attendees. Han Suk Kyu, who portrays the character of Doctor Sa Bu also known as Doctor Romantic and  in-charge of  Doldam, impresses with his voice and gestures. Lee Sung Kyung plays the role of Cha Eun jae, a second-year genius fellow who is bright and confident. Ahn Hyo Seop plays a second year surgical fellow, Seo Woo Jin who has tremendous ability to concentrate in the operating room.

Jin Kyung plays the tough and loyal nurse Myung Sim Oh, a dignified hostess who defends the Doldam Hospital. The actress showcases her solid acting power at the table reading.

Kim Min Jae plays Park Eun Tak a nurse with a strong, responsible and just heart. Yoon Na Moo takes on the role of Jung In Soo, a doctor of emergency medicine who got dispatched to Doldam Hospital. Both of them gave realistic performance and immersed themselves  perfectly into their characters.

Kim Hong Pa portrays Yeo Woon Young, the director of Doldam Hospital, and Jang Hyuk Jin plays Song Hyun Cheol, a character who chose a tightrope rather than his abilities. They both attracted attention with their passionate acting and read through each of their lines in detail.

Shin Dong Wook who acts as Bae Moon Jung, an orthopedic specialist at Doldam Hospital gives off a fresh feeling.

Park Hyo Ju plays the role of anesthesiologist and teacher, Shim Hye Jin who is authoritative, blunt, and focused.

The production company, Samhwa Networks said, “From the first script reading, the teamwork of all the actors were good and it raises the expectation even more. We are confident that the laughter and the actors’ passion for acting will produce a high quality content. Please pay attention to the Romantic Doctor, Teacher Kim 2, which will bring a calm touch to the home screens.”

For Han Suk Kyu, this is the first time in his career that he is working on a sequel for any drama series. Speaking about the project, Han Suk Kyu said,”I was very happy to be given the opportunity to work in Romantic Doctor, Teacher Kim Season 1. The teamwork of writers, directors, actors and staff was great. At the end of the day, I was very thankful towards them. ”

He further added, “I have worked on Season 1 together with writer, Kang Eun Kyung and director, Yoo In Sik, so I have a strong sense of trust in them.”

Romantic Doctor, Teacher Kim 2 is scheduled to broadcast on 6 January 2020 via SBS Network.