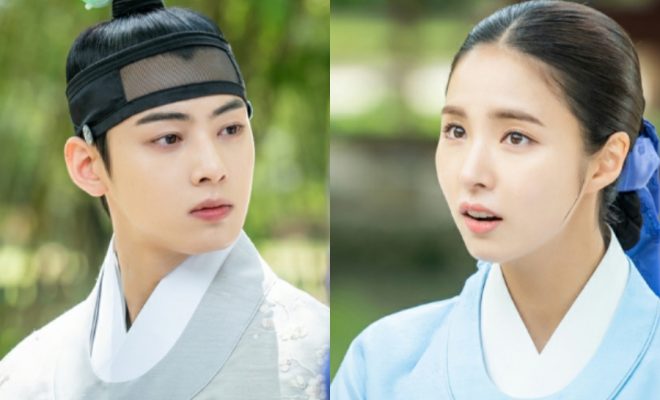 Nicely-paced, the next three weeks of Rookie Historian Goo Hae Ryung seem to be going all-out to treat its fans.

Episode 10 of Rookie Historian Goo Hae Ryung scored plenty of highlights involving the main leads. Aside from the romance blooming sweetly, the heavier side of the series is slowly erupting too. 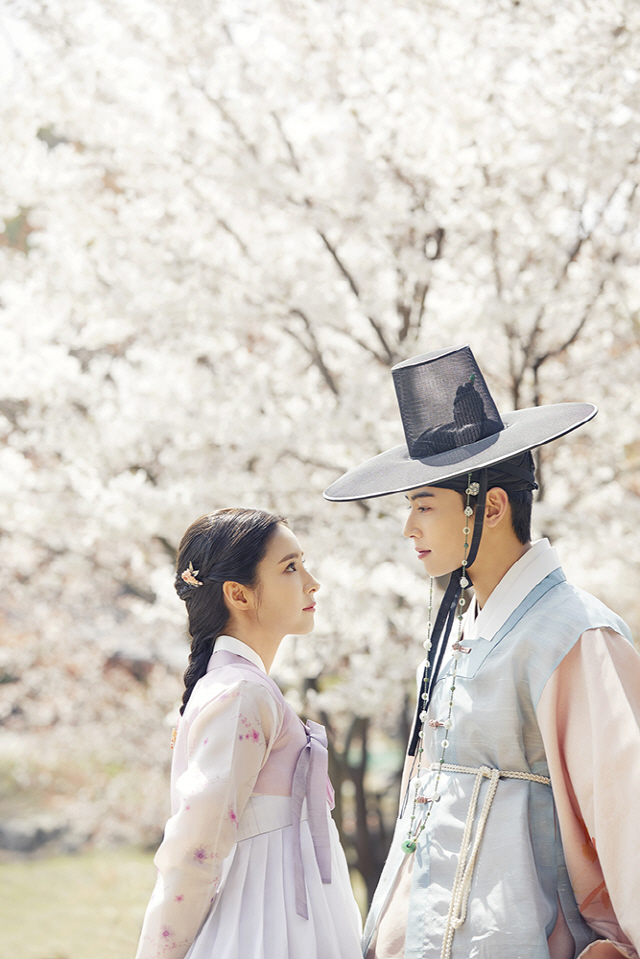 Finding a nearby shed, Prince Yi Rim and Hae Ryung silently watch the rain. Playing with the raindrops, Prince Yi Rim accidentally touches Hae Ryung’s hand. Out of reflex, he takes it back, but the rain and the moment made him go back to what his hand wants to hold.

The trance is broken when one of the historians called Hae Ryung’s name. Prince Yi Rim orders her to go back, but she refuses, saying she will walk him since there are tigers in the mountain.

Mischievous Hae Ryung keeps playing a prank on an approaching tiger so the prince gets annoyed at her. Walking fast, Prince Yi Rim stops when Hae Ryung offers to hold his hand. She explains how her brother used to hold her hand whenever they go to the mountain when she was young, and there’s no ulterior motive for her. Agreeing to her suggestion, he also remarks no ulterior motive for him.

Their sweet walking-in-the-forest-while-holding-hands moment gets interrupted when they hear voices of Hae Ryung’s fellow historians. On a sticky situation, she pushes the prince on a nearby shrub and works on diverting the attention of the two girls.

When the coast is clear, Hae Ryung helps Prince Yi Rim back and fixes his hat and clothing. The faint rage Prince Yi Rim felt just melts away and he mutters how pretty Hae Ryung is while gazing at her. He makes an excuse that he was referring to a nearby flower, but she cheekily acknowledges that she knows she is pretty. 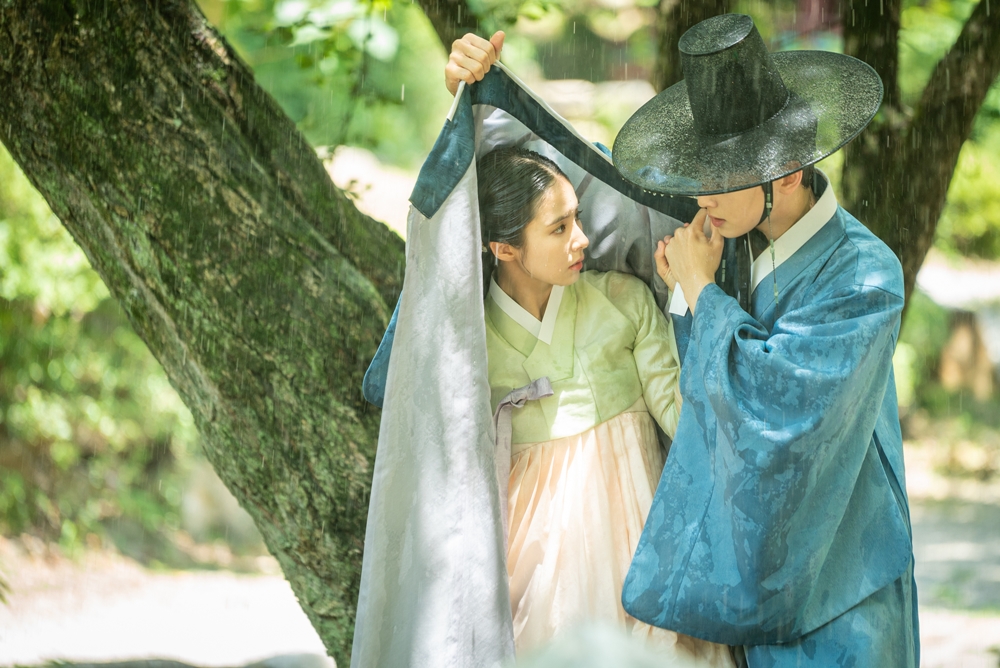 With the scheduled re-appointment, the lower ranking historians are working hard to be re-appointed to a different office. Unfortunately for three historians who wish for it, they are not successful.

While writing the official appointment of the the government employees, Hae Ryung stumbles on a strange irregularity. Some appointees violated the “kinship act”. By faking their hometowns, they are able to hold a government post to their hometowns.

Glares are thrown at Sahee knowing her father is behind all of it. Officer Min heads to where Sahee’s father is.

Requesting to correct the list, Minister Song refuses to relent reasoning how job relegation like that often overlooks minor law violation. Even more piqued at the old man’s twisted idea, Officer Min threatens escalating the issue to a higher office.

Disregarding Minister Song’s taunting of his relationship to his father, he tells him how he considered it that’s why he personally visited him. 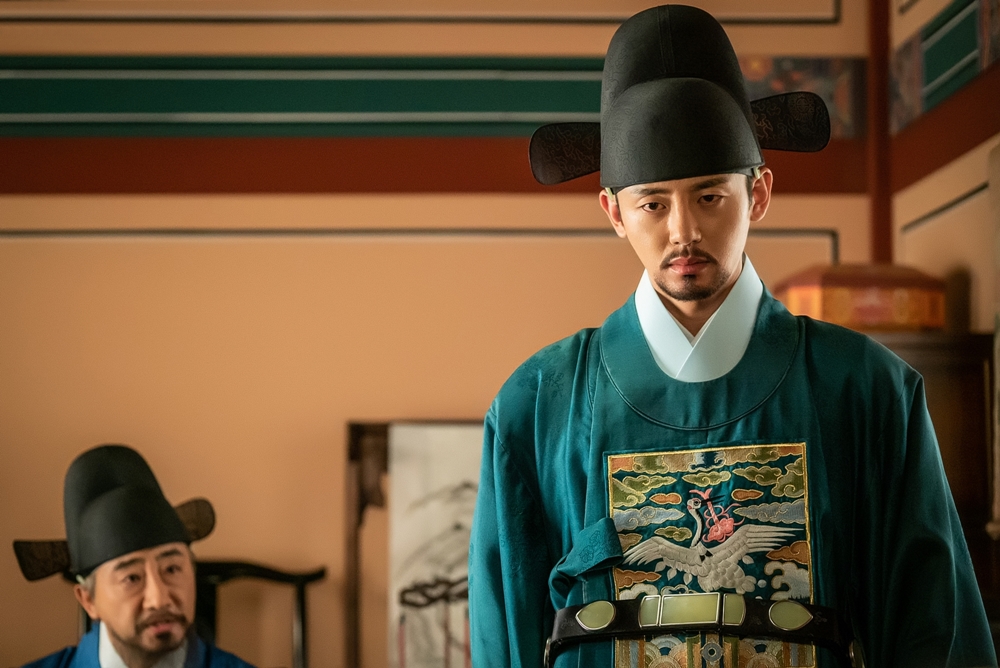 Everything is beautiful when you’re in love

Enjoying the night breeze, Prince Yi Rim smiles as his thoughts go on his memories with Hae Ryung. When Sambo asks him why he was out, like an artist that he is – he describes how beautiful the night is. But, trust Sambo to see through his actions. He nonchalantly mutters how everything is beautiful since he is in love with Hae Ryung.

Curiously asking what’s bothering him, Prince Yi Rim opens up a problem of his friend. However, Sambo corrects him fast that he has no friend. It’s time for Prince Yi Rim’s side, to analyze Hae Ryung’s actions. He tells Sambo how his friend was asked by the girl she likes to hold his hand.

Sambo deduces easily how Hae Ryung is not the type to do it so the only reason she would was because she was using him as a shield in case tigers approach them in the mountains. Refusing to believe his eunuch’s analysis, the prince walks away.

Getting at the wrong side of Government Official Song, Officer Min becomes the subject of Prince Jin’s meeting with the government officers. In a petition, his impeachment is proposed owing to his association with a father-in-law who plotted treason and a wife who committed suicide. It further adds how being the son of a prestigious family has had overlooked his flaws and gets a First Historian position.

Crown Prince Jin orders Officer Min to leave and asks for a replacement. After the meeting, SSC Min orders his allies not to do anything.

Taking Hae Ryung to Prince Jin’s chamber, Officer Min offers a resignation letter. The Crown Prince refuses to accept it, citing how he promised to write down all the people who suffered because of his father as a historian.

Questioning his old determined self, Prince Jin reminds him of the vow he made in honor of his dead wife. Citing how he went through an honest way of securing his post, the prince advises him to disregard what people say.

Pained and tired of all the gossips about his deceased wife, Officer Min can barely accepts his friend’s encouragement. He pleads to accept his resignation and walks away.

Hae Ryung follows her to convince him of not giving up, but to no avail. 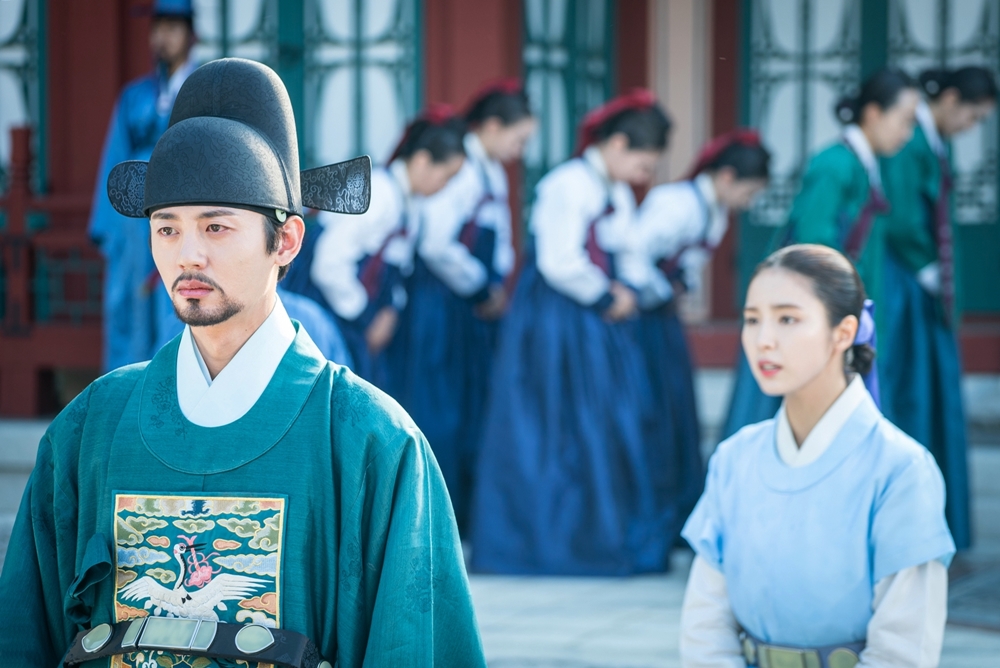 At night, SSC Min finds his son wallowing in alcohol. Bringing out the past, they engage to an emotional agreement of all the innocent lives his father has trampled including his wife.

Officer Min castigates his father for having no heart not to feel any regret for his wrongdoings. He visits the old house he used to live with his wife and recounts their happy and sad moments together.

The next morning, in the office of the historian, a bland atmosphere is evident. Just when they thought that Officer Min will be leaving, he comes in greeting the team leader. 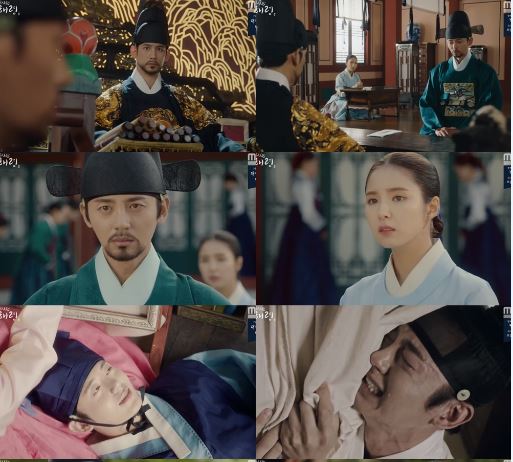 Throwing stones at a nearby pond, Sambo reminds Prince Yi Rim of not minding his overwhelming longing to be with Hae Ryung. Together with the court ladies, they educate him to be aware of Joseon dating rules. First, is to push and pull. Second, to give hot and cold treatment. He declines their suggestions since the eunuch secret passed-on trick did not work. Nonetheless, Sambo insisted and pushes him to be aloof, mysterious and hard-to-read.

Meanwhile, Officer Min takes Hae Ryung outside to apologize for what happened last time. She urges him to thank him warm and sweet since she chased after him to encourage him not to give up.

Unable to oblige Hae Ryung’s request to call her sweetly, Officer Min walks away with the mischievous female historian following him. Prince Yi Rim and his entourage see the two together, and just when Sambo reminds him to disregard, the prince calls their attention right away. 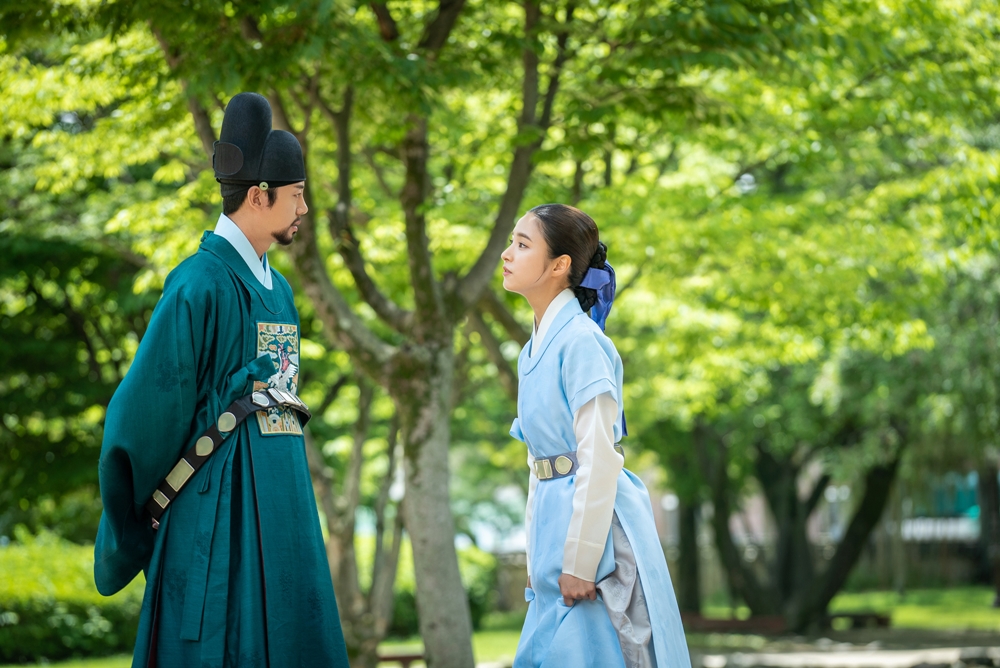 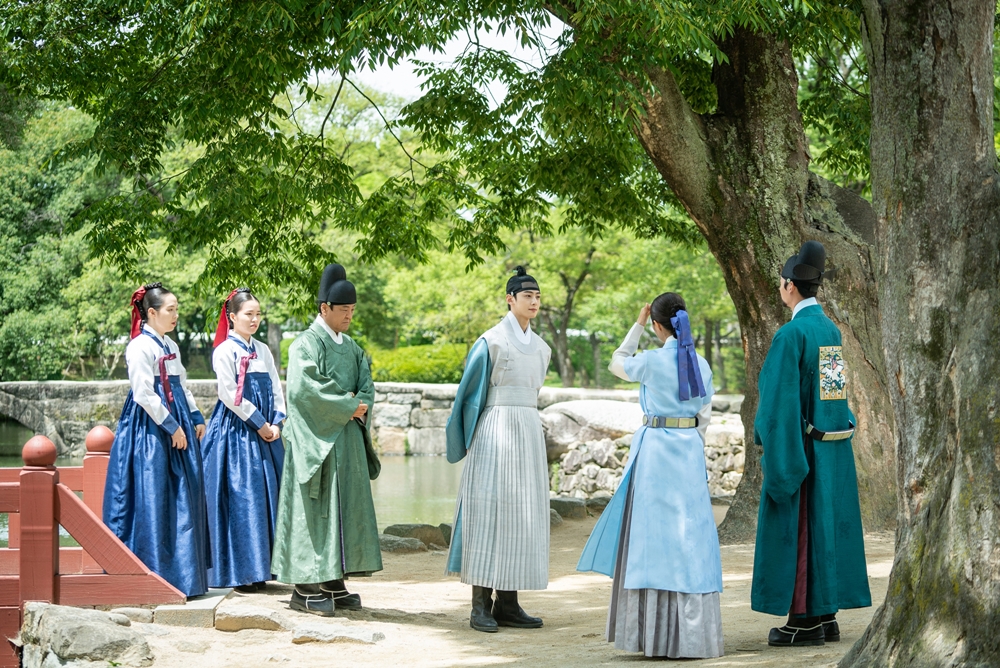 The girl Prince Yi Rim wants to know about

Telling Hae Ryung to go to Neokseodang, Officer Min stops the order and asks why she needs to go there. The two men exchange dagger looks so Hae Ryung steps in to break the tension.

Upon arriving at Neokseodang, Hae Ryung assures Prince Yi Rim that Officer Min does not mean to offend him and is just worried about her. Prince Yi Rim responds how that is all the more worrying for him. He asks her directly if she thinks Officer Min as a man. Surprised Hae Ryung responds that he is just a mentor for her.

Enumerating all the historians around her, Prince Yi Rim asks Hae Ryung if she thinks of them as a man. She eventually cuts the nonsense and asks him directly if he wants to say anything to her.

“I feel like I know nothing about you. And I don’t like it. I can only have these kinds of encounters with you. So I can’t know more. I wonder what you’re like outside Neokseodang, who you spend your time with and if you even take notice of me at all.”

Hae Ryung responds and tells her brother is her only family. She tells her she likes tinkering Western objects and reading books, particularly Astronomy. Beaming, she quips how she does not like romance novels because it makes her cringe.

Narrating her life in China, she tells him of how she beat up people who badmouthed Joseon. Prince Yi Rim listens to her blab while staring at her fondly.

Hae Ryung stops pacing and faces Prince Yi Rim to confess that she lied to him about something. She tells him that there was no mountain incident with her father. And that she has really an ulterior motive when she asks for his hand.

“I think I’ve told you enough for today. If I tell you too much in one day, you may not want to know more about me. I don’t like it.”

With that, Prince Yi Rim smiles and agrees to let her go home.

Apparently in Joseon, labeling a relationship seems to be a problem noh? There was also a time when a man and a woman can hold hands sharing mutual attraction, but not clearing the score verbally. *wink

But we really have to give it to Hae Ryung for making Prince Yi Rim’s heart flutter – in turn making our hearts flutter too.

Prince Yi Rim and Sambo’s interactions are some of my chuckling moments in this drama. I love how the unlikely chemistry between the two adds zest to the narrative each episode.

We now know why Officer Min harbors a deep resentment to his father who pushed his wife to commit suicide. Awaiting if SSC mean has still a good bone in him is something we hope to see.

A storm is coming for Rookie Historian Goo Hae Ryung with how episode 10 wrapped up. The preview next week shows our brave heroine being imprisoned after overhearing SSC Min questioning the King if he is hiding something about Prince Dowon. To make it more complicated, it was Officer Min who orders her to do it.

Can Prince Yi Rim protect Hae Ryung against the power of his father and SSC Min?

Hellokpop, as an independent Korean entertainment news website (without influence from any agency or corporation), we need your support! If you have enjoyed our work, consider to support us with a one-time or recurring donation from as low as US$5 to keep our site going! Donate securely below via Stripe, Paypal, Apple Pay or Google Wallet.
FacebookTwitter
SubscribeGoogleWhatsappPinterestDiggRedditStumbleuponVkWeiboPocketTumblrMailMeneameOdnoklassniki
Related Itemscha eun wooRookie Historian Goo Hae RyungShin Se Kyung
← Previous Story K-Drama Couch Recap: “Rookie Historian Goo Hae Ryung” Episode 9
Next Story → tvN Teases With Filming Site Photos Of Ji Chang Wook & Won Jin Ah