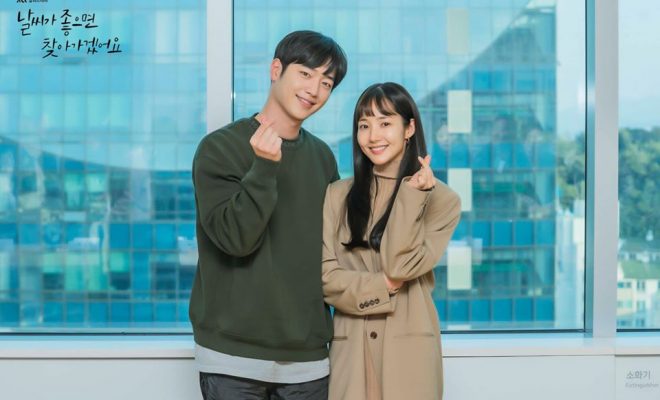 jTBC’s I’ll Find You on a Beautiful Day released the first set of photos of the main leads. In the pictures, Seo Kang Joon gives off the warm feeling of a Spring who will melt hearts. While, Park Min Young showcases her cold sensibility in the first cut.

I’ll Find You on a Beautiful Day follows a heartwarming story about Mok Hae Won (Park Min Young) who after getting exhausted of her life in Seoul returns to her hometown Bukhyeon. There, she meets Im Eun Seop (Seo Kang Joon) who runs an independent bookstore. 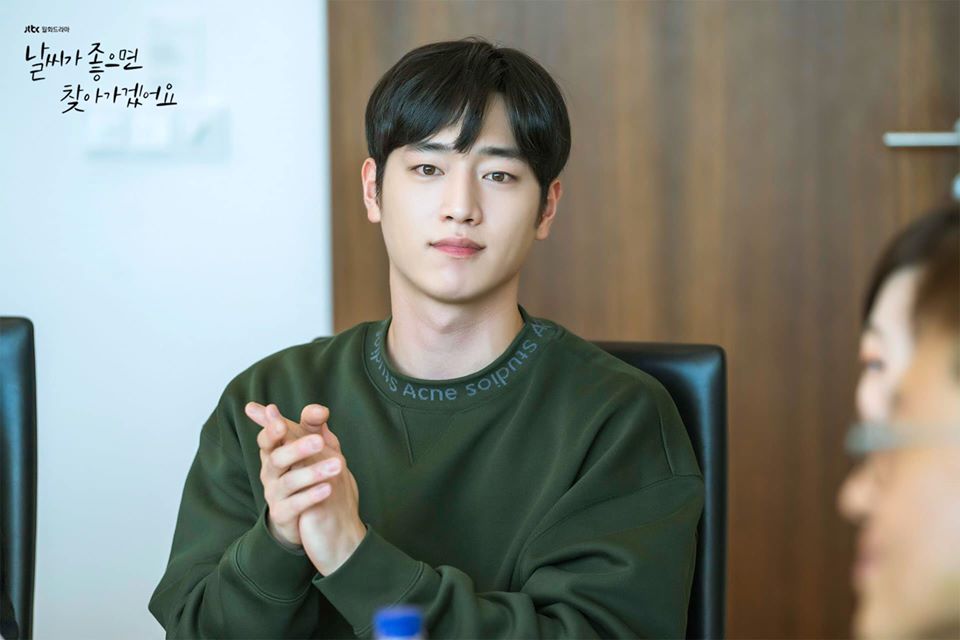 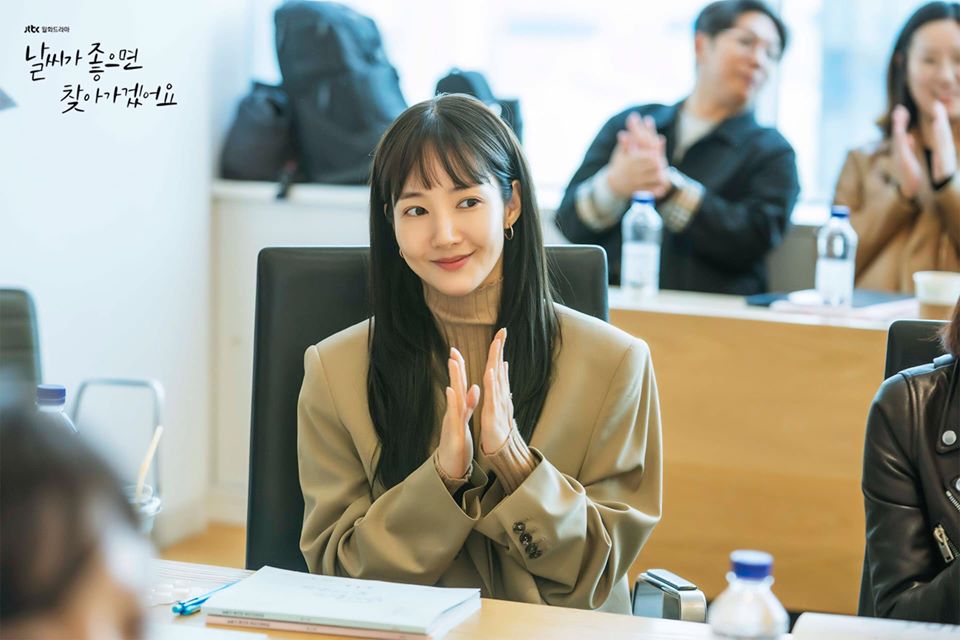 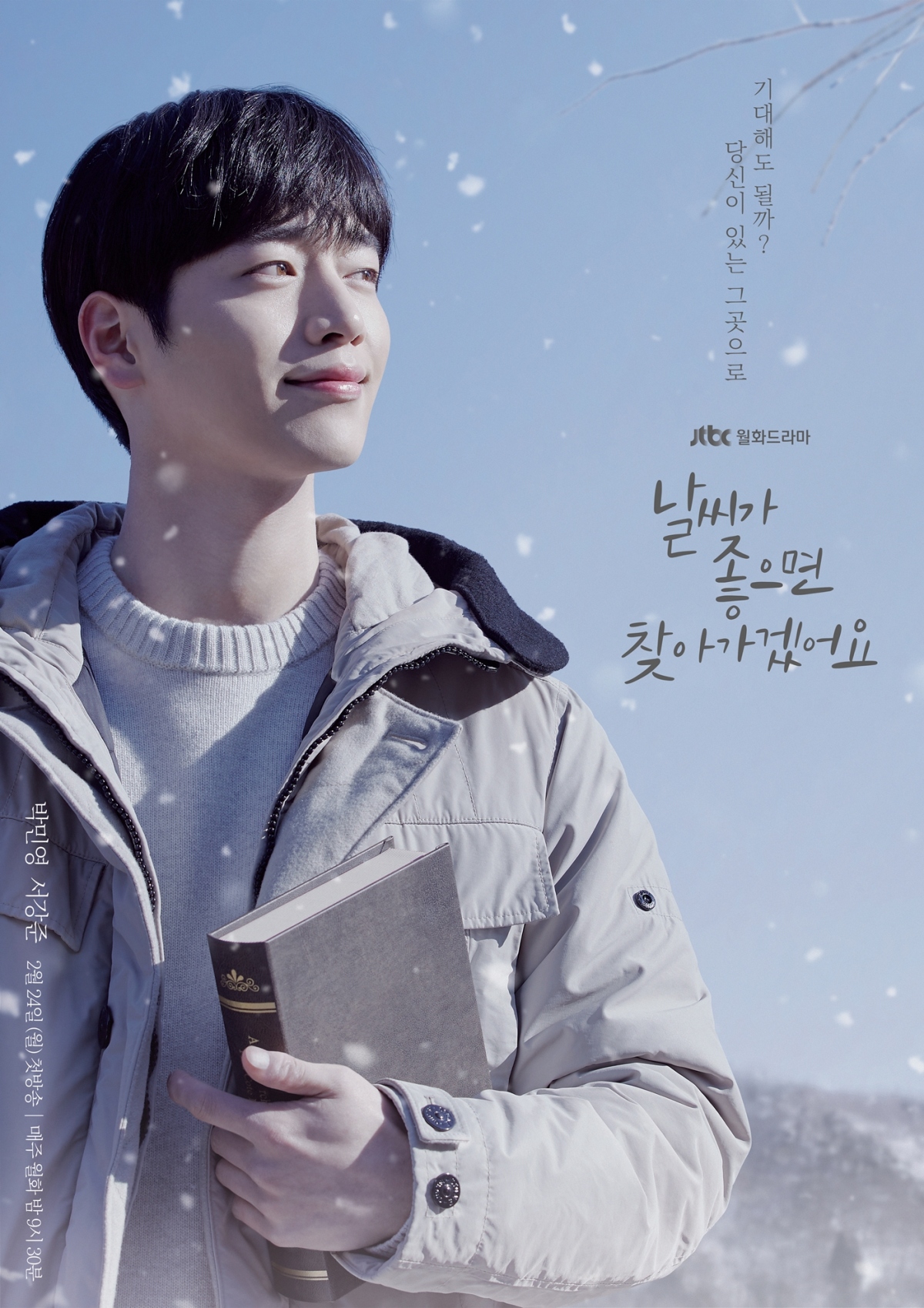 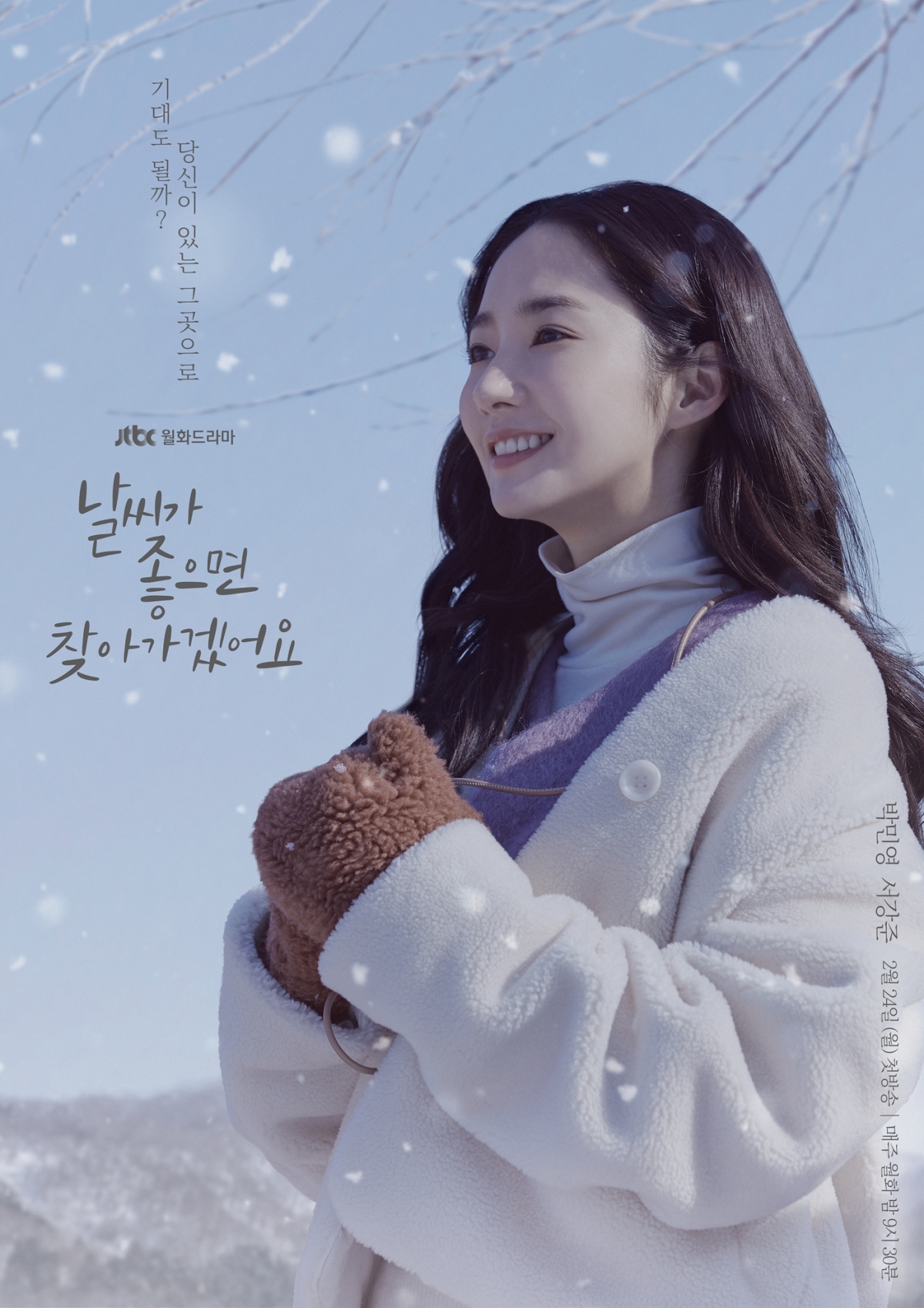 Park Min Young foreshadows the perfect transformation this time through her expression of various emotions.

The actress is going to show a deep emotional acting by donning the persona of Mok Hae Won, who was deeply hurt in her relationships with people.

In the still cut released, Park Min Young’s eyes show calm expressions creating a unique atmosphere. In one of the pictures, Hae Won stares out the window with hopeful anticipation as if looking forward to meet a nice person.

Her bright smile seems to say that this Winter will not just be cold. The audience can anticipate to find answers to whether Hae Won’s frozen heart can be healed with love again.

One of the members of the production team said, “Even if a cold wind blows, Park Min Young’s unique sensibility is infused with warmth which make you feel soft.” 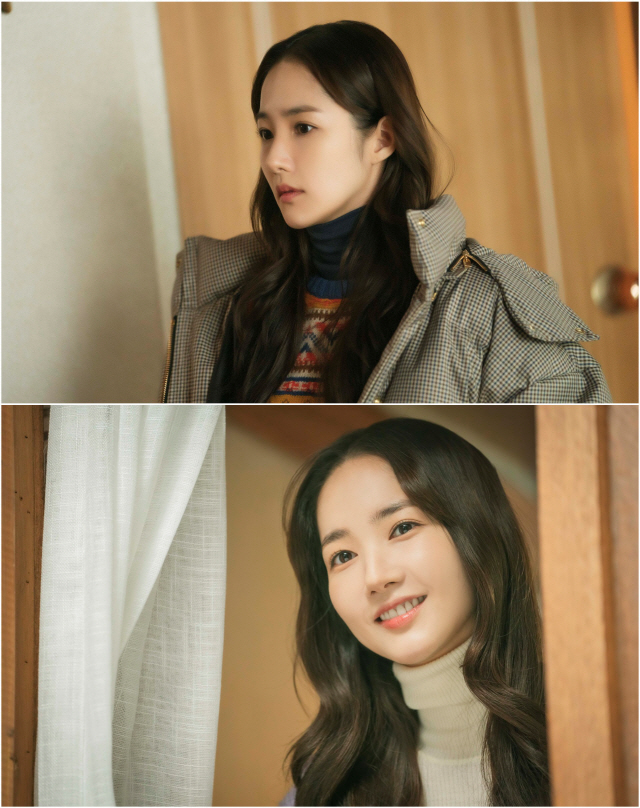 Im Eun Seop is a thoughtful person who is considerate about other people, and will deliver a spring-like feeling. He is calm and laid-back person and runs an independent bookstore called Good Night Bookstore in Bukhyeon.

The kindness of his warm heart can be felt as he is seen serving a cup of hot coffee to people who visit a bookstore in the stills. Eun Seop, who feels peace in a quiet and trivial everyday life, will face a wave of emotion as he encounters Mok Hae Won.

It is expected that Seo Kang Joon, who has received praises for his immersive acting, will deliver a top-notch performance in this role as well.

In the still cuts released on January 16, Eun Seop has the warmth that makes the bitter coldness of Winter bearable. Attentive eyes and tender smiles looking at the other side, his expressions are filled with gentleness.

This is why Eun Seop, a man like Spring, is waiting for the moment when he meets a distant woman like Hae Won who alludes to the cold Winter. 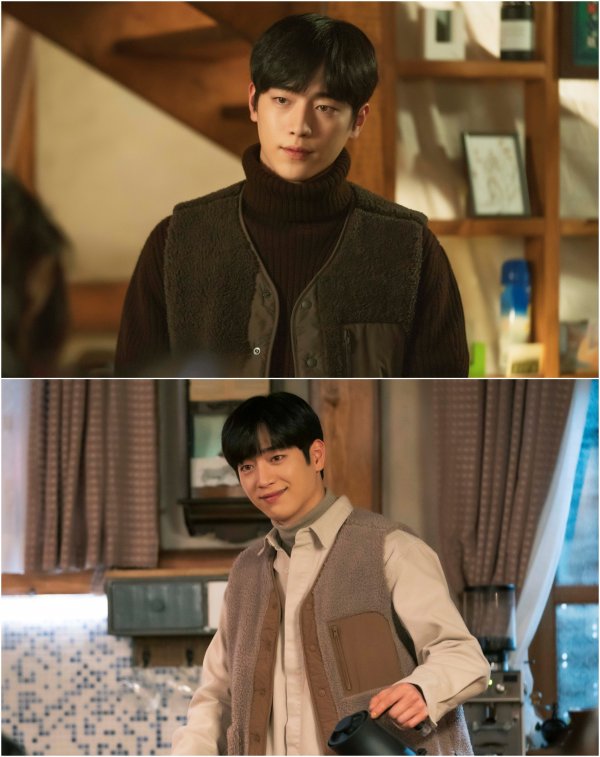 The production team of the drama said, “From the moment Seo Kang Joon entered Bukhyeon, he became one with the character Im Eun Seop. You can expect Seo Kang Joon’s acting will melt any frozen heart for the rest of the Winter. ”

They also added, “We ask for your interest and love for I’ll Find You on a Beautiful Day which will hit your home screens in February, the time between winter and spring when you would want Eun Seop’s warmth.”

I’ll Find You on a Beautiful Day will broadcast on jTBC in February following Diary of a Prosecutor. 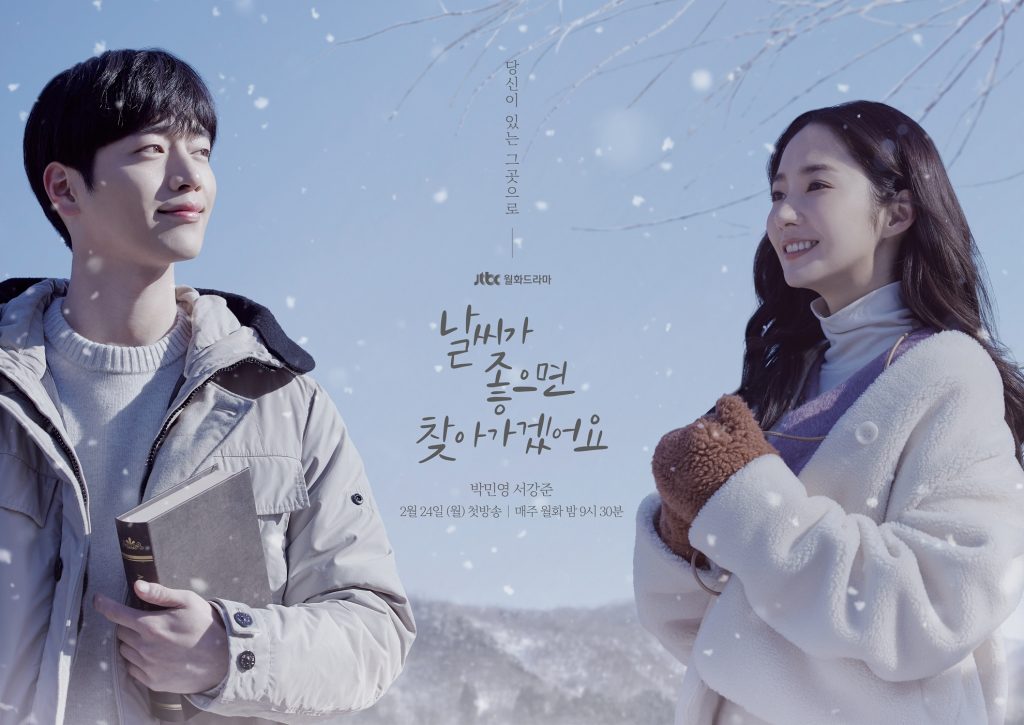 We need your support! If you have enjoyed our work, consider to support us with a one-time or recurring donation from as low as US$5 to keep our site going! Donate securely below via Stripe, Paypal, Apple Pay or Google Wallet.
FacebookTwitter
SubscribeGoogleWhatsappPinterestDiggRedditStumbleuponVkWeiboPocketTumblrMailMeneameOdnoklassniki
Related ItemsI'll Go To You When The Weather Is NicePark Min YoungSeo Kang Joon날씨가 좋으면 찾아가겠어요박민영서강준
← Previous Story Park Hae Jin & Kim Bo Ah Find Romance In New KBS Drama “Forest”
Next Story → Jung Yu Mi Talks About Her Lauded Film “Kim Ji Young, Born 1982” + Upcoming Netflix Original Series