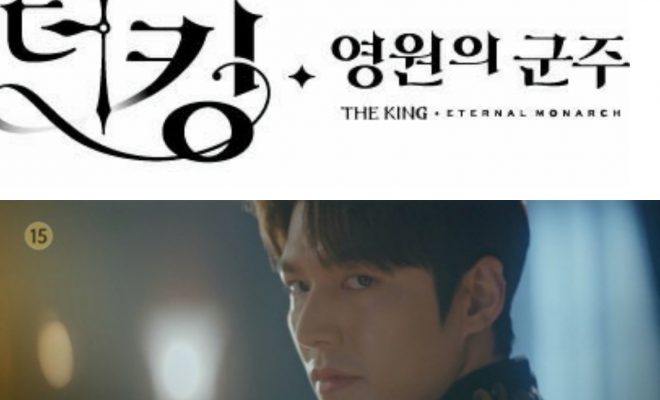 On February 29, star writer Kim Eun Sook announced that the eagerly-awaited fantasy-romance drama will begin in April 2020. No specified date has been revealed yet.

Previously, SBS unveiled a teaser featuring Lee Min Ho to the delight of its anticipating fans. The quick video trailer introduces the character of the actor with a peerless gaze and enigmatic aura.

Reuniting with the esteemed writer, both lead stars of the series have worked with Kim Eun Sook before. Lee Min Ho starred in youth romance drama, The Inheritors. Meanwhile Kim Go Eun spreed to huge popularity with her remarkable portrayal in Goblin.

Interestingly, Kim is also set to collaborate again with PD Baek Sang Hoon. They worked together in runaway hit romance series – Descendants of the Sun. Director Baek includes Love in the Moonlight, Who are You: School 2015 and Secret Love to his portfolio.

Billed to be one of the highly-anticipated dramas of 2020, The King: Eternal Monarch boasts an impressive cast lineup. Aside from its main leads, Woo Do Hwan (Tempted) and Jung Eun Chae (The Guest) are expected to provide vibrancy to the story through their characters.

Based on the initial story sketch, the series features two settings following its parallel universe concept. It is also billed to showcase romantic moments for the main leads.

Set to play dual roles, Lee Min Ho suits up as Korean emperor. He is trying to close the dimension to ward off the villain intent to wreak havoc in the kingdom he leads. His other character in the parallel world struggles to protect the people he loves from the projected antagonist.

Following Lee Min Ho’s dual portrayal, the same challenge will be tackled by Kim Go Eun. She challenges contrasting characters in the two parallel words. In Korean empire she portrays criminal Luna. Meanwhile, in the Republic of Korea world, she is Jung Tae Eul, a detective who will team up with Lee Min Ho’s character Lee Gon.

The King: Eternal Monarch is set to premiere in April 2020 via SBS.

Hellokpop, as an independent Korean entertainment news website (without influence from any agency or corporation), we need your support! If you have enjoyed our work, consider to support us with a one-time or recurring donation from as low as US$5 to keep our site going! Donate securely below via Stripe, Paypal, Apple Pay or Google Wallet.
53
SHARES
FacebookTwitter
SubscribeGoogleWhatsappPinterestDiggRedditStumbleuponVkWeiboPocketTumblrMailMeneameOdnoklassniki
Related Itemsjung eun chaeKim Go EunLee Min HoThe King: Eternal Monarchwoo do hwan
← Previous Story “Train To Busan” Follow-up Film “Peninsula” Reveals First Posters
Next Story → Top South Korean Companies Aid Coronavirus-Stricken Nation With Donations