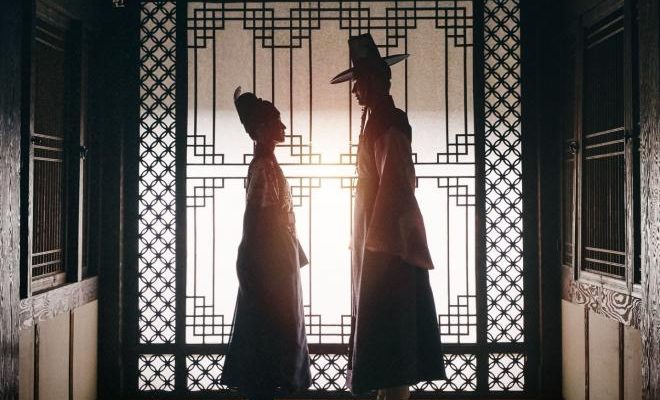 Netflix affirms October 11 as the launch date of the eagerly-awaited historical romance series, The King’s Affection.

The King’s Affection depicts the story of a princess who assumes her twin brother’s identity when he died. It is based from a comic book series inspired by imaginations about a woman rising to the throne, but inevitably disappears from history.

Disguised crown prince Yi Hwi (Park Eun Bin) and her teacher Jung Ji-un (Rowoon) embark on a tangled fate. In the first teaser poster unveiled, the heart-fluttering chemistry between the pair can be felt. Their silhouettes face each other, emphasizing height disparity and alluding to a secret romance.

Hiding her true identity and carrying a burdensome secret under the weight of the large ceremonial robes, crown prince Yi Hwi’s world changes when she meets Jung Ji-un through her royal lectures.

While hiding that she is a woman, she meets a pure man in the palace setting, inevitably engaging to a genuine mutual attachment. As their love and affection for each other blooms and their feelings deepen, they face a destiny that they cannot avoid.

The producers of The King’s Affection shared, “On set, Park Eun bin and Rowoon brought the charming atmosphere and feelings of wistful yearning to life realistically. Please show a lot of interest and look forward to the imaginations of what it would have been like to have a king disappear into the mists of history and the inescapable fate of the two people which starts on October 11th.”

The King’s Affection is directed by Song Hyunwook who worked on the dramas The Beauty Inside and Another Miss Oh, and written by Han Hee Jung who wrote Clean with Passion for Now.

The first episode will premiere on October 11th at 10:30 PM PHT, on Netflix.