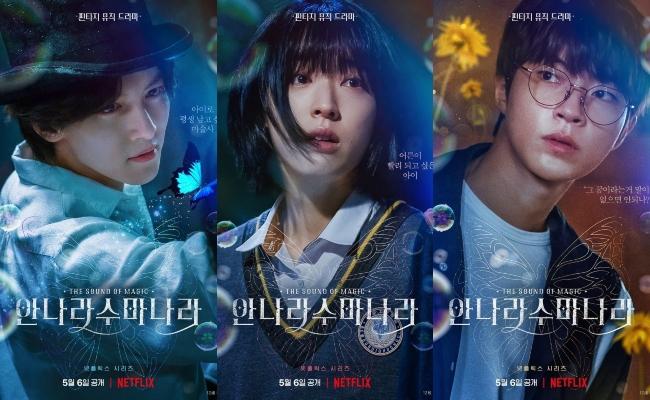 “The Sound of Magic” Acquaints Viewers With Lead Characters

In The Sound of Magic, a magician living in an abandoned theme park makes troubles disappear, and hope reappears, for a disenchanted teen enduring harsh realities.

Vaunting striking character posters, the dreamlike feel and phrases on the posters draw curiosity about the stories of the lead trio.

The magician Ri-eul, who stares at someone as if casting a spell, and the blue butterfly flying next to him create a fascinating look.

It further heightens the anticipation of the magical moment that he will create.

Next, Yoon Ah-yi, who wants to run away from the harsh reality and become an adult, tries to turn away from Ri-eul, who claims to be a real magician.

In a moment of crisis, she wants to believe in him as he gave her comfort that no one has ever given.

Lastly, Na Il-deung represents the face of conflicting youth. Forced toward a goal by his parents, he decides to discover what he truly wants.

The Sound of Magic will be released on May 6. Stay tuned for our press conference coverage on May 3.