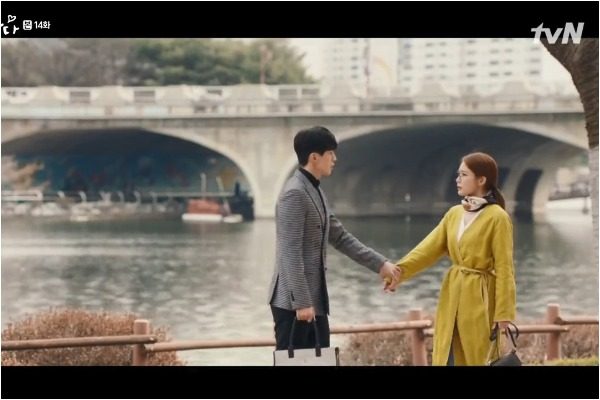 Key Moments In Episodes 13 And 14 Of “Touch Your Heart”

While Yoon Seo overcame the greatest challenge in her career and reputation, Jung Rok is about to face his.

As the couple goes through the break up phase, a past case resurfaces. It will have a direct effect on Jung Rok’s relationship with Joon Kyu and professional standing. Even as Jung Rok and Yoon Seo spend days apart, they can’t help but show concern for each other and how hard things have become. 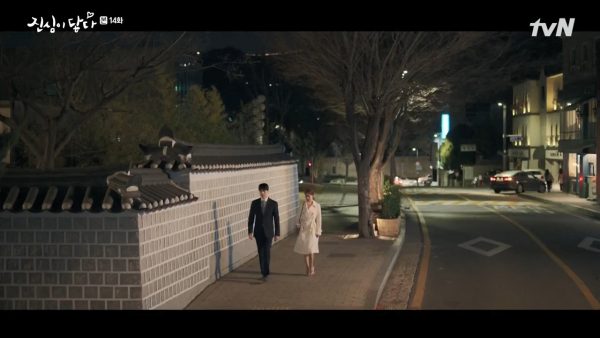 After watching Roman Holiday and expressing her happiness, Yoon Seo’s heart breaks. Jung Rok tells her they have to end the relationship. She tries to identify the root cause of Jung Rok’s change of heart. She cites possible reasons – all it seems involve her return to star status. Jung Rok confirms and it is much better for them to part ways.

Hyuk Joon arrives at her house the following day. It worries him seeing Yoon Seo with her head on her knees. He quickly asks if something is wrong and she tells him that Jung Rok broke up with her. Hyuk Joon has no comforting words to say to her. He reminds her that she needs to collect her things at her desk. But if she is not up to it, he can go and do it for her instead. Yoon Seo says she will do it and that she needs to see and speak with Jung Rok.

At the law firm, Yoon Seo surprises the employees when she shows up. However, they wonder about her sadness and lack of energy. As she is cleaning up her desk, she glances inside Jung Rok’s office and sees him working. But Jung Rok is pretending to be busy. He is also stealing glances as Yoon Seo keeps her things in the box. She enters and tells him she is leaving and once she does, there is no turning back. She asks if he will not say anything or look at her before she goes, Jung Rok stands and speaks to her, formally commending her work and wishing her well. 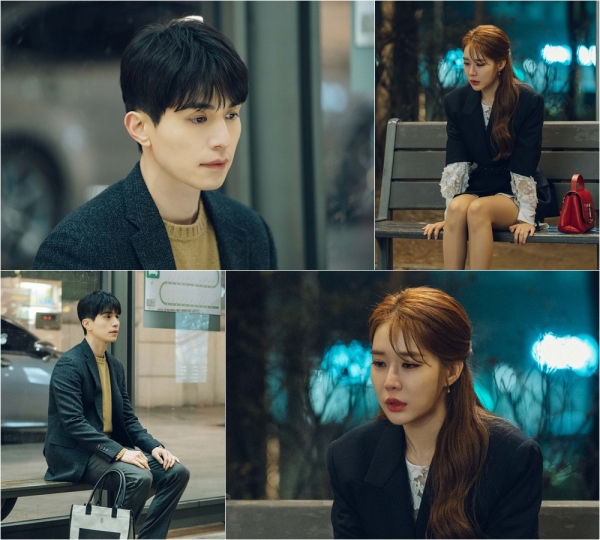 It is clear that Jung Rok and Yoon Seo are having a hard time dealing with their breakup. They work harder than usual, and both immerse themselves in their respective works. Jung Rok’s colleagues, especially Joon Kyu lauds his effort as he handles multiple cases. Yoon Seo, on the other hand, is also making an impression as she begins shooting for her comeback drama.

A suspect’s mother barges in the law firm demanding to see Jung Rok and it turns out she is Park Su Myeong’s mother. She angrily tells Jung Rok that her son is innocent, and they need to look for the real killer. The mother is in extreme distress as her son’s sentencing is fast approaching. She continues to tell Jung Rok that her son is not cruel enough to stab a person twice.

Jung Rok is present the day the court hands their verdict to Park Su Myeong. He receives twenty years in prison, much to his mother’s agony. Outside the courthouse, Jung Rok sees Park Su Myeong’s mother and she begs him for help. She apologizes for yelling at him the last time. She insists that her son only stabbed the victim once and the second wound, the fatal one, must have come from the wife. The mother reveals that Im Yun Hee never visited her son in prison and that she disappears from the neighborhood. 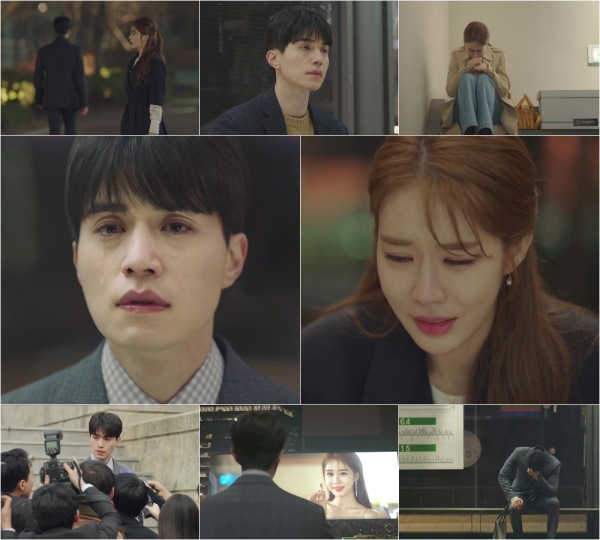 Paralegal Lee digs up a lot of information regarding Im Yun Hee that raises red flags. Jung Rok visits Su Myeong, and after talking to him, he decides to represent him in his appeal. Joon Kyu is against it the first time he told him, and he gets furious when Jung Rok finally made his decision. He tries to talk him out of it and even questions Jung Rok’s take on their relationship. He tells him Jung Rok never treated him like a boss and if he continues with the case, people will lose their trust in him as a lawyer and it will affect the law firm as well. 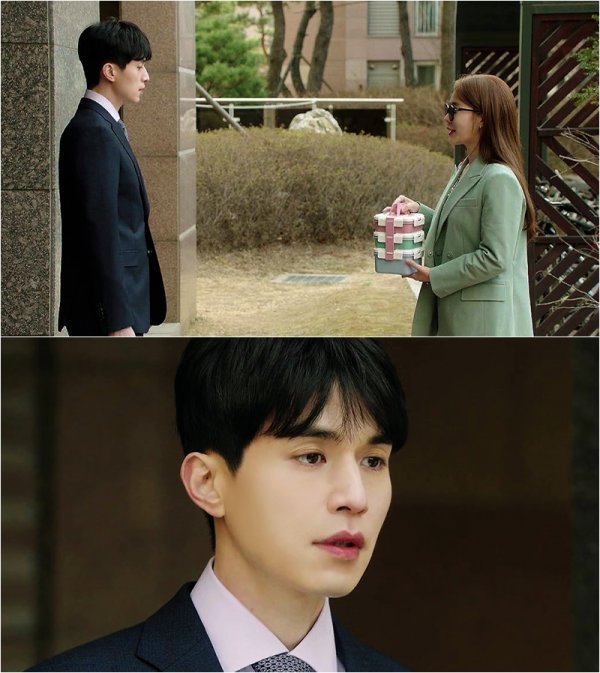 However, Jung Rok decides to pursue the case which causes a rift in his relationship with Joon Kyu. As the trial approaches, he receives heavy criticisms. Joon Kyu is not talking to him and he overhears the employees discuss how business seems slow as the firm has not received any new client. To lessen the impact, Jung Rok hands in his resignation letter and the CEO Joon Kyu explodes in anger. For the succeeding days, the atmosphere in the law firm is filled with tension and the employees wonder when it will end.

After sharing a drink (thanks to Se Won), the two finally made up. The employees decide to help out Jung Rok and put their heads together in solving the case. As evidences pile up, the more they become suspicious of Im Yun Hee.

Yoon Seo is aware of the backlash Jung Rok is receiving and she worries about him. She recalls the moments he was there when she was going through a tough time. Her worries double as Se Won tells her Jung Rok is not eating properly due to the case. An opportunity to see Jung Rok comes up when the intern calls her up regarding a pen she left behind. She insists on waiting for Jung Rok. She only gets hurt as he advises her not to worry about him anymore since they are no longer couple. 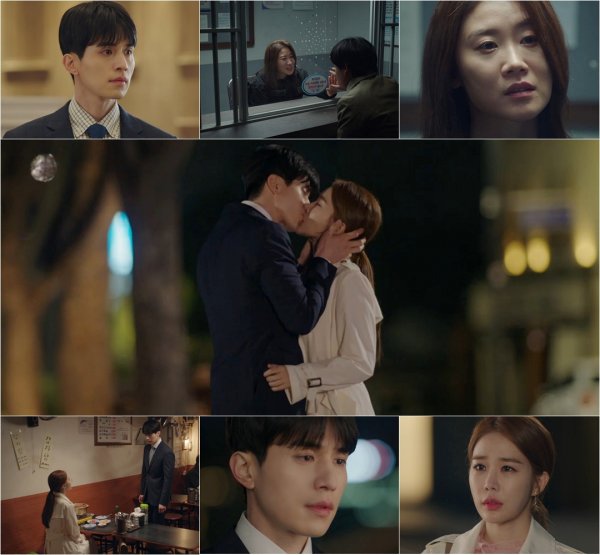 Hyuk Joon feels guilty and confesses the real reason why Jung Rok broke up with her. Knowing that he did it not because he no longer likes her but rather he adores her so much, Yoon Seo becomes more persistent. She consistently shows in front of him, giving him lunchboxes or just wanting to see and greet him. Park Su Myeong’s trial heats up and Jung Rok hits a bump when the prosecution calls upon Im Yun Hee as a witness. Fortunately, a DNA result proves Im Yun Hee’s guilt and Jung Rok emerges victorious.

Yoon Seo sends him a text message, asking to meet at the pork-bone stew restaurant they previously went to. Upon arrival, Jung Rok tells her they need to talk some place else. She reveals she wants to start over and asks him if he is willing to let her go just like that. Jung Rok breathes heavily and confesses he loves her, and the couple shares a kiss.

Touch Your Heart episodes 13 and 14 started off heavy in the emotions but ended on a happy note. It was heartbreaking watching Yoon Seo try to think of possible reasons for Jung Rok to break up with her and all she could think of revolved around one of the things she loves the most – acting. I understand Yoon Seo’s confusion as Jung Rok has always been honest with her on how much he likes her. Although he has his own way of showing affection, his actions leave no room for doubt about his feelings for her.

I also get Jung Rok’s reasoning for ending their relationship, but I would have liked it more if they talked things out (we could have been spared the heartaches). However, I think the breakup also served its purpose as both realized how deep their feelings are for each other. In such a short time, they have become each other’s source of strength and happiness. It was particularly touching when it was revealed that the reason Jung Rok opted to ride the bus instead of driving his car, is to see Yoon Seo on the gigantic monitor in front of the waiting shed. He stood by his decision and tried hard to deal with the pain in his own way.

Another thing I love about last week’s episodes, is that it has showed that Always Law Firm employees are more of a family rather than colleagues. They can be professional when required and they are good at what they do, but when situations become difficult, they are there to help each other out. I like Jung Rok and Joon Kyu’s relationship. As revealed, they have gone way back, and it was Joon Kyu who saved Jung Rok’s career when he decided to become a whistleblower. His desire to protect Jung Rok is justifiable, and despite his childish (borderline petty) attitude, he is serious when it comes to protecting people he cares about. 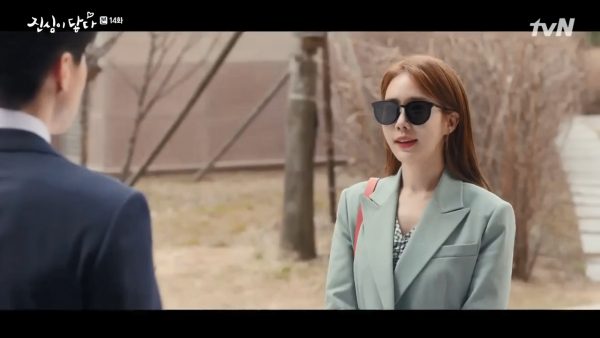 In a way, Yeo Reum has been vindicated as she was right all along that Im Yun Hee was not the victim. The woman is cunning and manipulative that she could stand to watch someone go to prison for a crime she committed. She took advantage of Park Su Myeong’s admiration and condition, so she could collect the insurance money. I am glad she was proven guilty and will be imprisoned for it.

Now that we are reaching the final week of Touch Your Heart and it seems the conflicts have been resolved, I am going to be happy if this series ends smoothly. By that, I mean everyone should have the happy ending which they deserve.

Hellokpop, as an independent Korean entertainment news website (without influence from any agency or corporation), we need your support! If you have enjoyed our work, consider to support us with a one-time or recurring donation from as low as US$5 to keep our site going! Donate securely below via Stripe, Paypal, Apple Pay or Google Wallet.
FacebookTwitter
SubscribeGoogleWhatsappPinterestDiggRedditStumbleuponVkWeiboPocketTumblrMailMeneameOdnoklassniki
Related ItemsEpisodes 13 and 14Lee Dong Wookrecaptouch your heartYoo In Na
← Previous Story Kang Ji Hwan And Kyung Soo Jin Confirmed For TV Chosun’s Historical Fantasy Drama
Next Story → K-Drama Premiere: “Welcome To Waikiki 2” Warms Up With Trademark Comic Elements & Endearing Cast Members