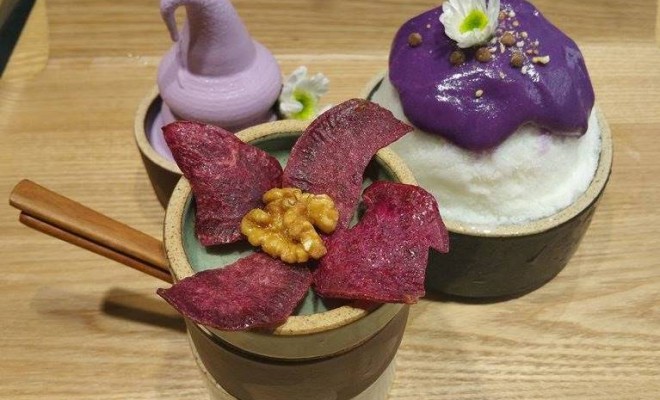 Tired of all the hipster cafes, chain stores and places with Seoul-less food? 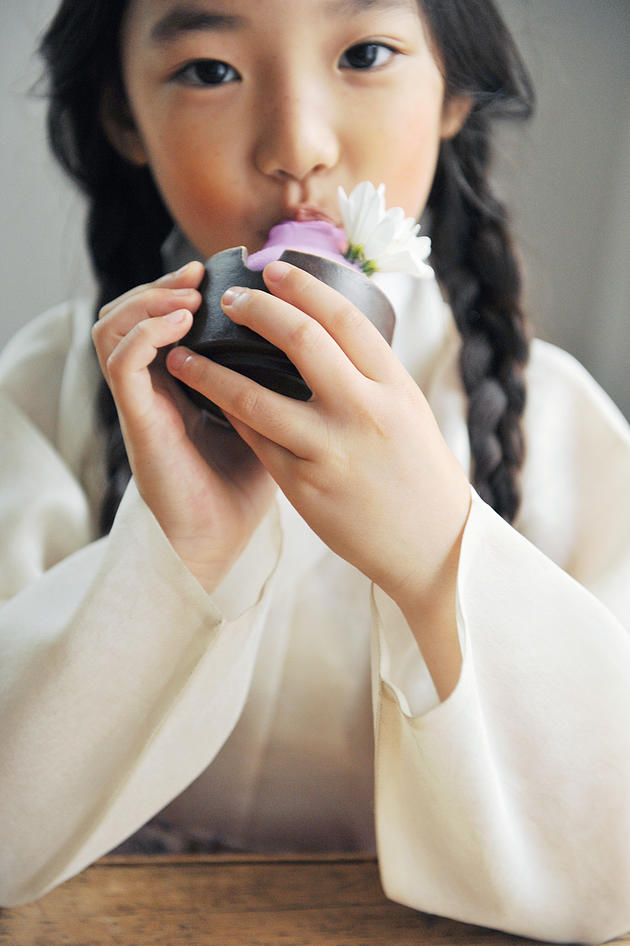 Wander down back alleys and thoroughfares, and you will find that beneath the veneer of the city, traditions still thrive even in Seoul. Café Bora, located at the end of such an alley, is the one and only café we would like to recommend after tasting its desserts, soaking in its ambience, and learning its backstory. 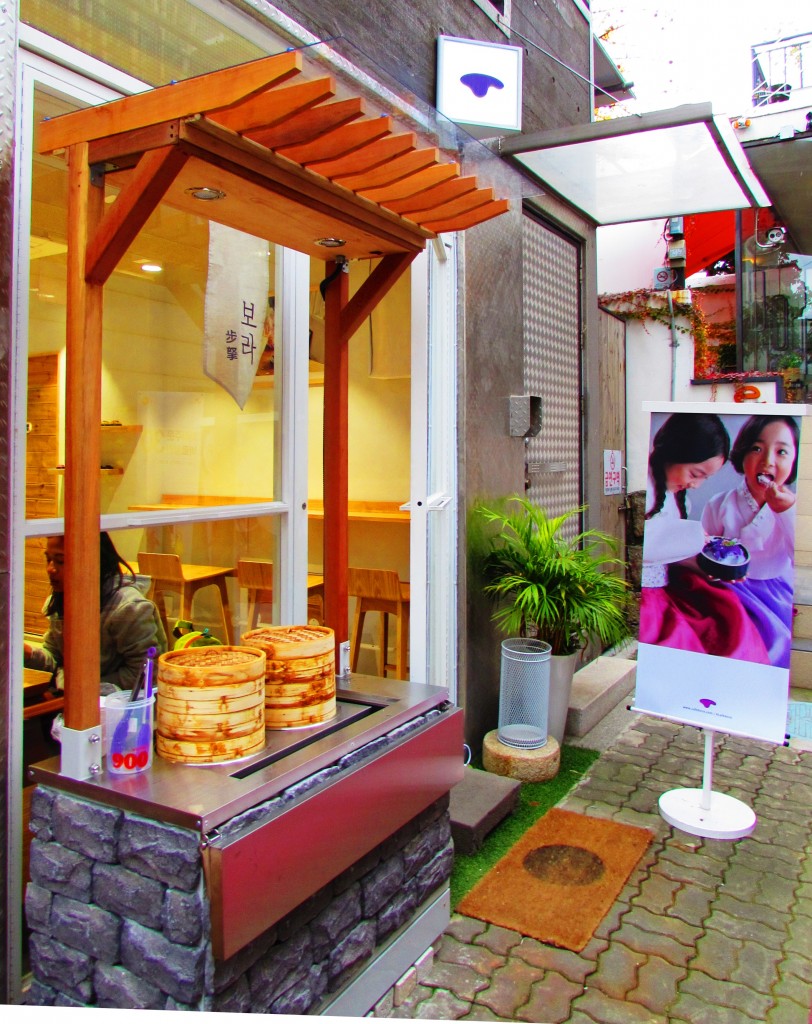 Purple – the colour of magic, mystery, devotion and royalty.

Magic in the desserts: “Natural down to the last drop of water.”

When it comes to food, pictures say a thousand words. Café Bora’s magic is evident here, isn’t it? Each dessert, served with sincerity and style. And the most important point? “We thought about how some people wanted to eat desserts even though they might be on a diet, and that’s how we came up with the concept of a healthy dessert. We used natural ingredients, sourced from all over the country, and came up with concoctions that anyone can enjoy regardless of their diet and age,” said Shin Seon Ho, one of the owners of the café, during the interview with us. Regardless of whether you might be very health-conscious or not, the light desserts at Café Bora are definitely easy on the eye, tongue, stomach and… waistline. Abracadabra. Pure magic. Do not say you were not warned. 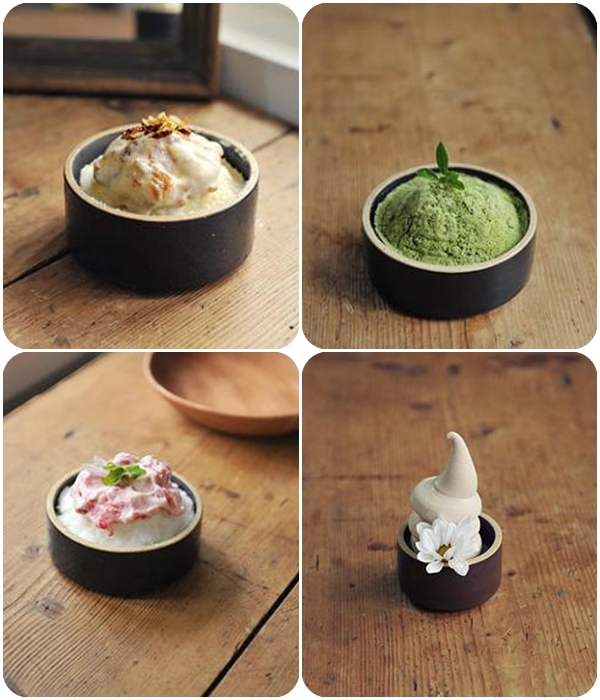 For those heading to Korea this winter, and are not used to the weather, it might be a little too cold for cold desserts, but fret not! There are sides like goguma chips and beverages like hot (or if you like it cold, iced!)“cauldron” coffee. The new winter menu are as follows: the Bora steamed bun, rice cake macarons, Chosen seltzer, porridges, and Vietnam coffee. 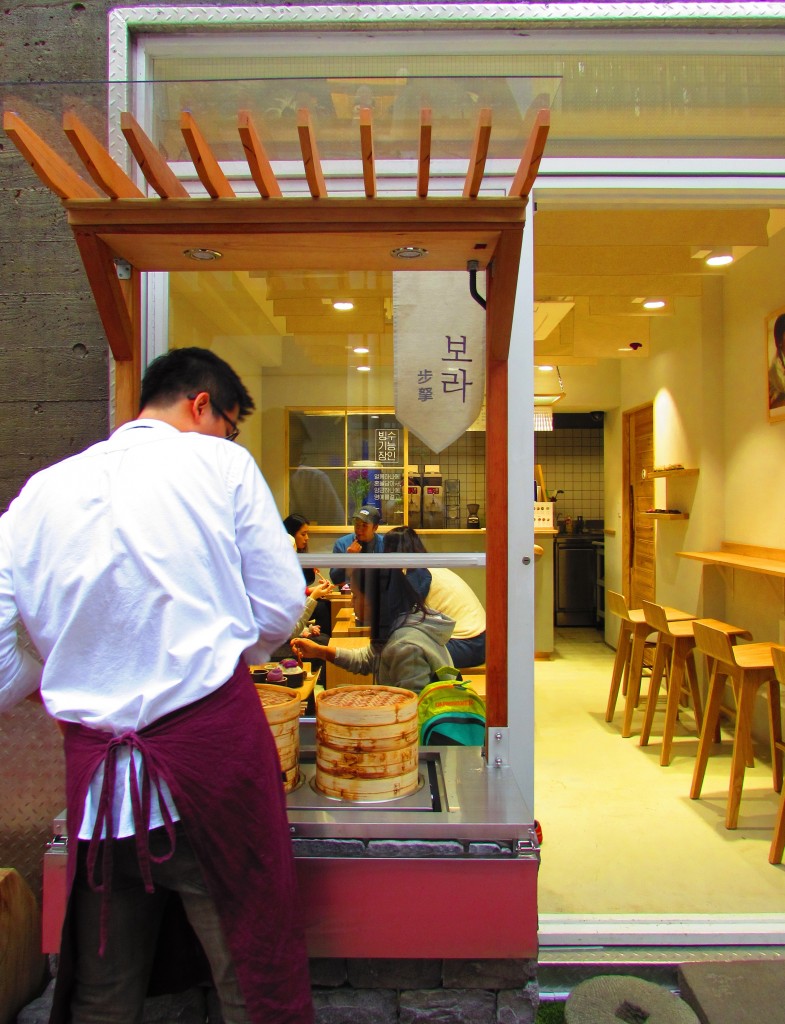 Café Bora is the brainchild of three owners, and was finally born just four months ago, in July 2015. Although still a young outfit, Café Bora has already attracted the attention of conglomerate Hyundai. After participating in a show to select a brand for Hyundai’s Pangyo branch and emerging the overall winner, Café Bora has opened a store in the Hyundai branch next to Pangyo station. Also, broadcast station KBS has already visited the café, indicating that Café Bora really is a place you should keep your eye on, especially if you want some authentic Korean desserts!

The main mystery, of course, lies in Café Bora’s menu. Café Bora strives to continually create new menus and is always working hard to give customers a taste of their new take on “happiness”. Customers can always look forward to new creations while enjoying their favorite treats. Take some time to savour each mouthful and immerse yourself in the quiet, mysterious ambience of the café after exploring the busy, bustling Insadong.

Devotion: The story behind the story – “All for that one smile”

Shin Seon Ho shared with Hellokpop that the team behind Café Bora had always wanted to run a business together. Having met in high school, Shin Seon Ho and the other owner of Café Bora shared this dream for many years. However, after fininshing their graduate studies, the pair went down different paths. Shin Seon Ho left to pursue his MBA in America and later worked there for some time, while his friend worked for in the marketing field and for the government for many years. Yet, throughout their years apart, they kept in contact and often talked about their shared dream. When Shin Seon Ho finally returned to Korea, their dream began to materialize. The team began to grow, and with their effort, Café Bora was born after going through many hardships.  One of the sponsors decided to pull out of the project just before the contract for the lease was to be signed, and it seemed as if the dream was about to come to an end. Yet, with the luck that comes only with effort, Café Bora pulled through and finally opened its doors in Bukcheon.  When Shin Seon Ho was quizzed about the café’s simple philosophy-“Bora-the taste of happiness”-he shared that he and his friends first tasted goguma ice-cream in Tokyo, and that taste gave them a deep sense of ‘happiness’  He and his friends were so mesmerized by the taste, they wanted to bring it to Korea and share that happiness with their fellow countrymen. Yet Shin Seon Ho and his friends knew that Koreans were very health-conscious, and could be averse to the idea of eating too much sweets and desserts.

He said, “Remember the time when you were a kid, wanted an ice-cream so badly but your parents retorted, “no, it’s not good for your body!” or you wanted to eat cake and they said,”no, it’s unhealthy!” (laughs) We wanted to bring happiness to everyone, including those who felt that desserts were bad for health. We wanted to give people a dessert that was healthy, so that they can enjoy sweet food even while on a diet.”

And so, came the birth of desserts that are not only healthy, but also delicious. All that effort and devotion,“for that one smile”.

Curious, this writer asked for the reason behind the continued emphasis on ‘happiness’ and the idea of bringing a ‘smile’ to each and every customer. “Actually, this café was also partly set up in memory of a friend who shared the same dream as us, but as this friend is no longer around, we want to make Café Bora a success so it can become a testimony to his life and our shared memories together.” Shin Seon Ho said. Life is short, happiness can be fleeting. But at that very moment, it is real, isn’t it.

Most people find Insadong intriguing, but it may not be enough to satiate one’s curiosity, especially if you want to see the ‘authentic’ Korea. Or some might think it is too crowded and not exactly something up one’s alley. If so, cross the intersection at the end of the Insadong street, and walk straight down into the road directly outside the palace walls. As you walk down the narrow street next to the palace walls, you will be transported back to a more romantic, slower-paced Seoul – Bukcheon. 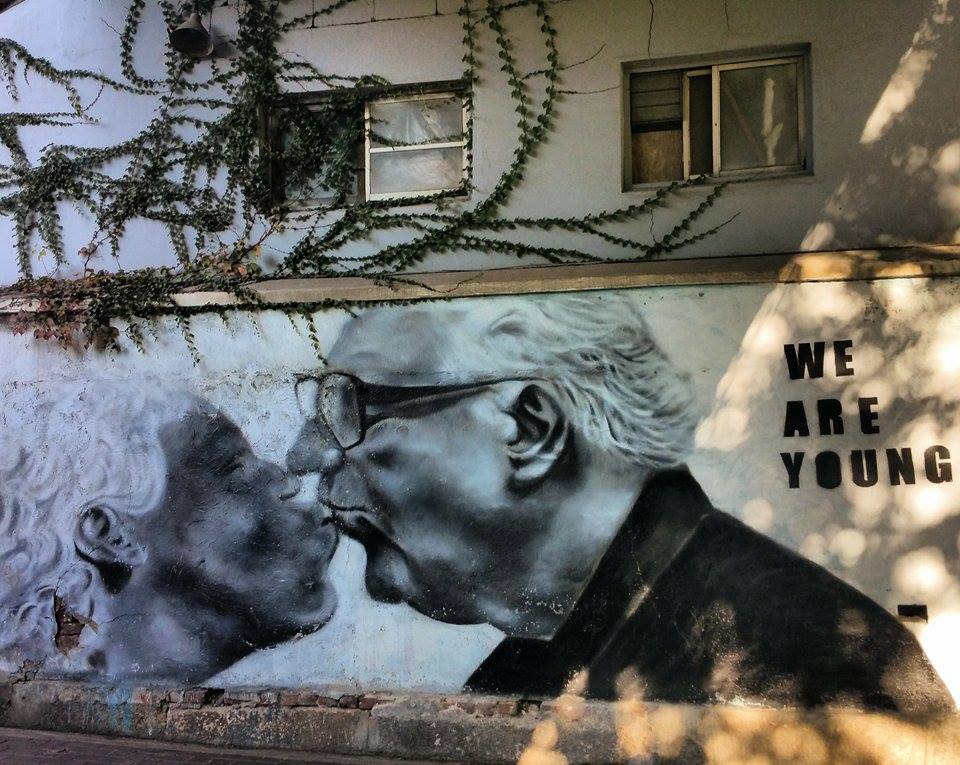 Stop at this mural, take some time to reminisce about your old dreams, and then continue going straight. Soon, on your left you will see a sign featuring Café Bora’s specialty – the sweet potato ice-cream.  Turn left into the alley, and follow the royal purple carpet rolled out on the floor all the way to the café. There, some happiness awaits your arrival.

Most  cafés are places where we stop by, rest and then go. This writer thinks Café Bora is more than that. Maybe the magic in its dessert will wake up some old dream sleeping in the corner of your heart. Maybe the sweetness of the desserts will bring to mind some bittersweet, forgotten old dreams and memories of  yesteryear. At that moment, we hope you will taste your very own version of happiness.

Special thanks to Mr Shin Seon Ho for taking some time off his busy schedule to talk to Hellokpop.