One Korea concert, Pyongyang Ramen, additional public holiday? Recently, K-pop idols shared their thoughts on Korean Reunification in one of the most highly anticipated concerts of the year – ONE K Concert.

It’s Hangeul Day in Korea, and what better way is there for fans to spend their holiday and commemorate the creation of the Korean Hangeul than going to ONE K Concert to listen to all their favourite Hallyu songs, which could not have been possible if not for the existence of Hangeul?

Some 60,000 fans descended onto Mapo-gu, Seoul and swarmed into the World Cup Stadium for the concert with One purpose, One dream – ONE Korea!  Some 60,000 seats were up for sale for the concert, and a great majority was snapped up, resulting in half of the stadium being occupied by light stick wielding middle and high school students. In the middle of the field, a stage with a circular design took up half the floor space. Possibly designed to fit the theme of “Unification”, the stage design was in tune to the concert’s purpose-to support the cause for the separated Koreas to become a whole again. 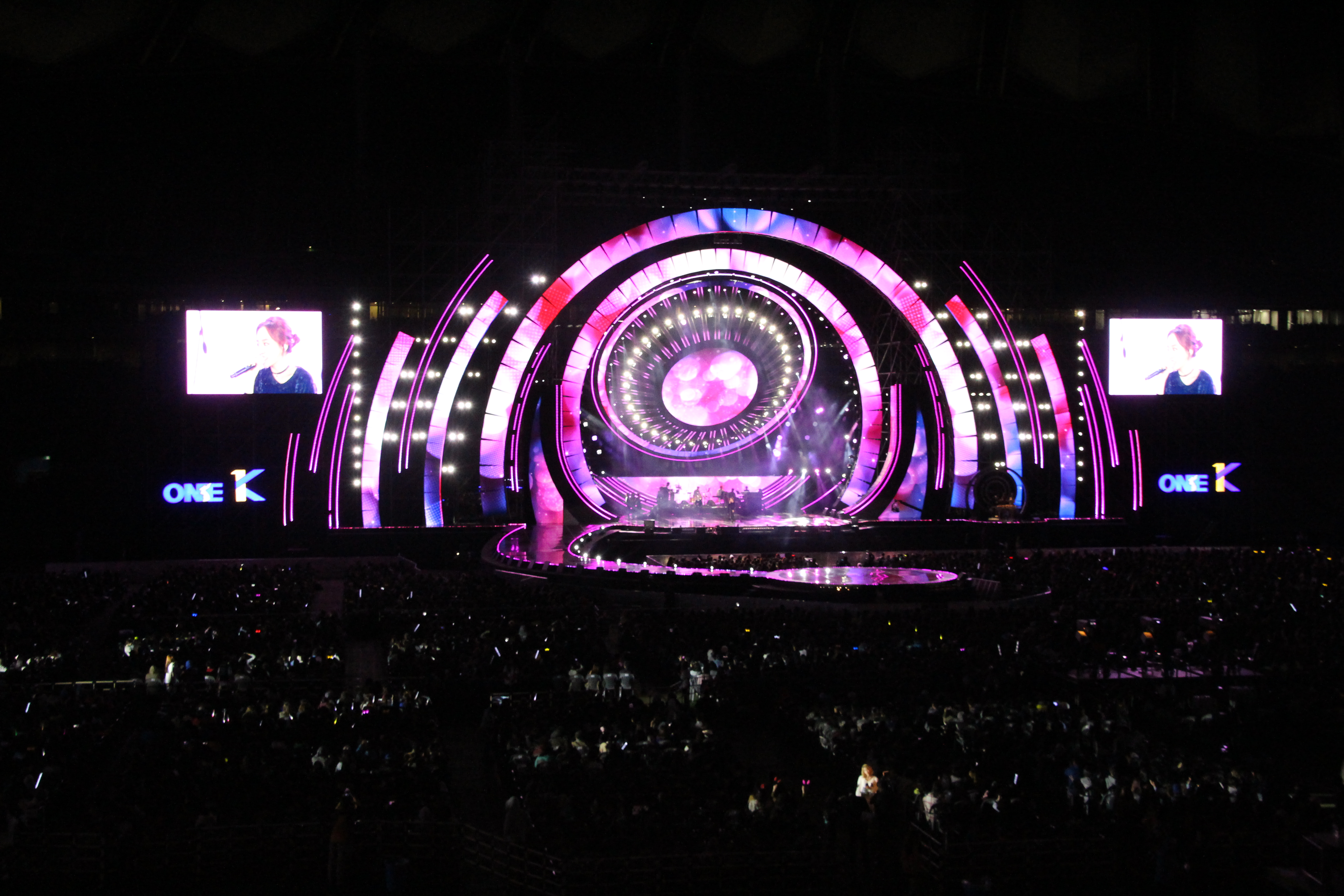 For the opening performance, a marching band entertained the crowds with their drumming skills before the concert “officially started”. Along with the rhythmic beats, the atmosphere became more and more heated up by the minute despite the temperature dropping as night descended.

AOA’s Seolhyun was one of the special MCs this time, and although fans cheered loudly for her, she said that she was nervous as this was her first time hosting. We think she handled it professionally!

The opening song was by none other than one of the judges of Korea’s Got Talent, Kollen Park. With a standing chorus in white behind her, she sang regally. For her second song, she took off her black jacket to rock the stage in her white getup and with her dancers. The MCs commended her for the youthful energy, as even though she is currently 48 years old, her powerful performances were on par with the performances of the young idol groups around.

Not losing out to their sunbae who gave the first performance of the night, the first three girl groups to appear also put up energetic performances. AOA first gave the audience a heart attack with their heart-stealing hit “Heart Attack”, then with “Like a Cat”. Next, Purfles rocked the stage with “A Bad Thing”. sonAmoo next rocked the stage with their midriff-baring costumes and their spinning for the song “Round N Round”. With so much spinning around, it must have been indeed dizzying not only for the girls, but also for fans as well!

The next guest MC, Girl’s Day (Minah) was greeted enthusiastically by the crowd. The other MCs showered her with compliments, which she gratefully accepted. Minah also said that she looked forward to this concert, as it had such a special purpose. And so, she helped welcome the next two groups up to the stage!

The next group, SPICA, proved that they can and “they will sing”. Performing “Tonight”, SPICA showed off their greatest strength tonight: their powerful vocals. Immediately after, Boys Republic came out in their white and frey tuxedoes and greeted the audience with “Hello”.

The next guest MC was greeted with loud cheers: EXID’s Hani! Hani mentioned that, “EXID has not have many chances to stand on such a big stage, so it is going to be a very refreshing experience”.

Touted as autumn’s singers, Na Yoon Kwon and Younha next took the stage. Na Yoon Kwon  crooned out “If It Was Me”. In Korea, autumn is touted the “males’ season”, as guys apparently feel the loneliness more acutely than females do as the weather gradually grows colder. It was a song fitting for the season here, but we do hope Na Yoon Kwon is not feeling that lonely! Veteran singer Younha belted out “Password 486” while having fun riding the rhythmic beats of the song, strumming her air guitar and singing about her “secret boy”.

Yangpa then serenaded the crowds with her soothing voice, before switching to an upbeat version of her song. With her strong vocals, she delivered a beautiful rendition of Lee Sun Hee’s  “Beautiful Rivers and Mountains”, probably as a reminder of the purpose of today’s concert. In the same way, MCs continually reminded the audience what this concert was for- One Dream, One Korea, and unification for Korea.

Kim JoHan teamed up with KARA’s Youngji for “Soulmate”. Both showed off their exceptional rapping skills, and we’re glad that Youngji got to share the stage with Kim Johan and perform a song she said she really liked!

Hongbin from VIXX was the next special MC, answering the question: if the two Koreas unified, what kind of Korea comes to mind? He said that he would like to go to Baekdu-san to see the scenery there. The other MC said he hoped for a Korea that could have a ONE Korea concert together. In videos featuring Kim Gu Ra interspersed among performances, the topic of Pyongyang Ramen and Unification Day also came up. Should Korea be unified, all Koreans would be able to eat food that they have not tasted before, and also enjoy an additional holiday! SPICA’s Jiwon, who came out as the next MC said that she would want to eat some of that and gain some weight as she loves all food!

After all the talk about North Korea, the next two groups to take the spotlight was EXID and then Girls’ Day. Loud cheers from all around the stadium greeted them, with fans shouting chants throughout the songs “Ah Yeah”, “Up and Down”, “Ring my Bell” and “Darling”, shouting enthusiastically and waving their light sticks for the whole time.

KARA’s Youngji was the next special MC. She said that she was thankful that she could share the stage with Kim Jo Han, and she practiced really hard for it as it was a song she really liked. However, the other performance that she really anticipated was of course … KARA’s stage!

VIXX once again proved that they had a big fan base when they were received by a crowd screaming as soon as they appeared. As Hongbin is currently shooting a drama, the VIXX members used this opportunity to ask for more love. Performing “Love Equation” and “Error”, VIXX set the stage on fire with their emotionally powered stages and red tuxedos.

Rap legends MFBTY (Yoon Mi-rae, Tiger JK and Bizzy) made everyone reminisce about the special someone who “makes (them) smile even when (they) are sad” with their song “Angel”. Next they rocked the stage with “Bang Diggy Bang Bang”.

As another special MC for the night, Wonder Girls’ Hyelim was asked what she would like to do should the two Koreas become unified. She answered that she wanted to be able to perform Wonder Girls’ songs to a unified Korea and be able to share music with all Koreans.  Also, Hyelim wants to be able to eat Pyongyang Ramen, sit in the train and travel around the country with her family.

Next up was Monsta X, who only debuted in the first half of the year, showed that they have already established themselves as artists when they were warmly received by the crowd. They performed “Rush”. Right on their heels, GOT7 appeared in their black tuxedos and gave powerful performances of “If You Do” and “Just Right”.

The cheers of greeting EXO’s Baekhyun were so loud that the MCs could not seem to hear one another clearly. Also, as most of his comments were drowned out by the ear-splitting screams, it’s a pity but most of Baekhyun’s comments went unheard. Afterward, the MCs managed to get Baekhyun to put in an audible answer to the question “What would you like to do in a Korea that is unified?” Baekhyun answered that he would like to go on a tour in the express trains around the country with EXO fans. This, of course, excited the crowd further. He then introduced his very own SM hoobaes!

Red Velvet came up next and took the spotlight with their hit songs “Dumb Dumb” and “Ice Cream Cake”, getting fans to rap, sing, and chant throughout the two songs. By then, the fans were very pumped up and all ready to party the whole night with BTS, as they brought the atmosphere to new heights with “Dope” and “I Need U”.

SISTAR came back with “Shake It” and “Touch My Body”, garnering loud cheers of approval every time they “shook it”. As we had already met SISTAR in an interview the day before for Korea Joa 2015 and received their “Shake It” album, this chance to see them “shake it” live was indeed the icing on the cake!

MC Red Velvet’s Seulgi came up to the stage and said she felt that with such a big concert, she has received much motivation, and will relish her status as a singer of Red Velvet to work even harder. And, if the two Koreas are unified, Seulgi declares that she wants to go to Baekdu-san and wishes for everyone to join her!

Next, the veterans of Hallyu came to rock the stage. Although both groups have seen changes in their member lineups, they proved that they indeed still have it going. KARA performed “Mamamia” and “Cupid”, while Wonder Girls brought their instruments on stage with “I Feel You” and then left them behind for their “Like This” stage.

The last special MC for the night was SISTAR’s Bora! She then invited the other groups up to share the stage for “One Dream, One Korea”. As all the idol groups stood on stage together to sing “One Dream, One Korea” together, the moment culminated into the highlight of the night, as the representatives of Hallyu came together as one to sing for the merger of the two Koreas, which are technically separated since the Korean War ended in 1953. “But if all people share that dream it becomes a reality”. If Koreans wish for unification, it would hopefully come true someday! For those who have not yet heard it, you can watch the official music video here, and have a look at the translated lyrics too.

Throughout the whole concert, whenever these boys appeared briefly on the screen, even if it was a mere few seconds the fans would scream. That’s right! It is none other than EXO, who closed the ONE Korea concert with their songs “Love me Right”, “Growl” and “Lucky”. Like the lyrics in “Lucky” which goes “(We’re) so lucky to be born in the same country, so lucky because we speak the same language”, hopefully the people of the two Koreas can one day say that they have indeed been blessed to be born in the same country, and are lucky to be able to share the same language. 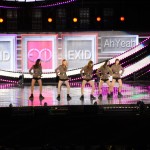 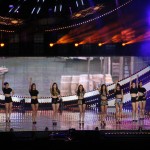 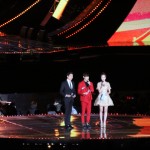 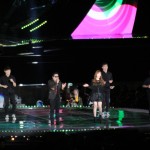 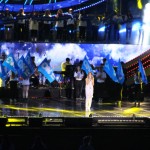 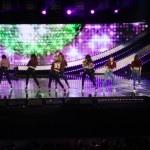 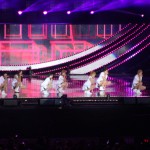