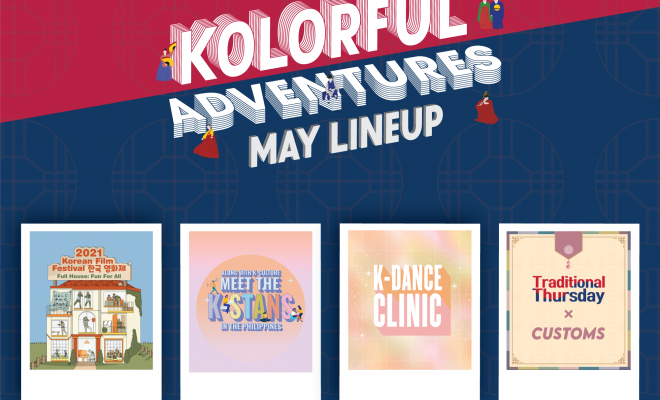 By Lyris | May 4, 2021
FacebookTwitter
SubscribeGoogleWhatsappPinterestDiggRedditStumbleuponVkWeiboPocketTumblrMailMeneameOdnoklassniki

Staying at home may have taken a different meaning these days, but Korean Cultural Center in the Philippines remains keen on its commitment to making it more enjoyable and informative for the Filipinos!

Love for family is a cultural aspect that both Koreans and Filipinos share. This May, just in time for Family Month in Korea, KCC made sure to pack activities for the K-film lover, K-Drama crazy, K-Pop stan and the K-Culture fan family member, through Kolorful Adventures events! 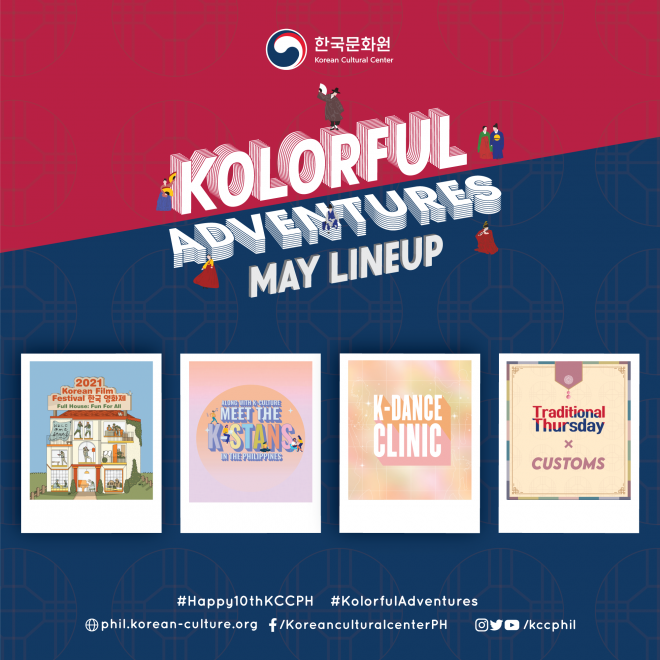 Kicking off May is KCC’s signature film event 2021 Korean Film Festival: Full House, Fun for All. Loaded with seven films under the Action, Comedy, and Family Drama genre, the festival will be available for viewing in the Philippines for free via KCC’s official website from May 7 to May 27, 2021.

Viewers can also get the chance to win prizes by joining the 2021 KFF Online Film Reaction Essay Contest and the KFF Survey.

Meanwhile, K-Drama crazy individuals must watch out for something that KCC is pioneering this May, the shorterview series titled Along With K-Culture: Meet the K-Stans.

Shorterview is a combination of words, short and interview, which is an increasingly popular format in Korea’s online shows and vlogs. In this six-part series, which will drop every 10th of the month starting this May, viewers can expect a different approach into celebrating KCC’s 10th year anniversary in the country.

Its episodes would tackle elements of K-Culture and assess its impact locally through the lens of experts and keynote speakers from various industries and institutions.

For those who have been excited to get movin’ and dancin’ to K-Pop songs, now’s the time to ready those dancing shoes because K-Pop Dance Diva Dasuri Choi will be putting on her teacher hat anew.

Finally, the “K-Dance Clinic” is taking place this May 19. Catch the free live stream of Dasuri’s dance tutorial with the lucky participants who have joined “K-Dance! Power Up” event last month on KCC ‘s official YouTube Channel.

Finally, KCC will also be going back to the basics this May through its Traditional Thursday. For this month, KCC”s SNS followers will learn more about Korean Customs including the concept of Courtesy, Warm Affection, Community and Fun. These online contents would surely get the audience more immersed in the Korean culture and would probably be able to apply a thing or two in their own lives.

KCC has laid down a bunch of interesting activities this month for everyone to choose from. But why choose when you can watch and participate in all?

Expect some sweat, traditions, adrenaline rush but a lot of fun, from all of KCC’s events and Kolorful Adventures activities this May!