Drama fans, it is an exclusive annual festival for international TV dramas.

As part of the TV Movie Premiere which will take place from August 13 (Saturday) to September 10 (Saturday), viewers can preview the dramas that were submitted to the Seoul International Drama Awards 2016. From the total of 265 entries, 8 dramas will be shown, including:

‘Yeong-ju’ will be on screen at the Blues Music Festival in Yeong-ju, Gyeongsangbuk-do, which is the actual beautiful filming site of the drama. The five foreign countries’ dramas will be screened at the cultural centers of each exhibiting country.

The Celeb Cinema will take place for 2 days from 9th to 10th September. The drama production experts and actors will enjoy the drama and interact with audiences during the event. ‘Dramaworld’ from USA, and a web-drama titled ’72 Seconds’ from South Korea will also be screened. Directors and actors of each of the dramas will attend the event and interact with the audiences.

Viewers can enjoy watching these drama on bigger screen, and preview submitted entries by applying through Seoul Drama Awards website by September 1, and registration is on a first-come-first-serve basis.

The Seoul International Drama Awards 2016 will take place on Thursday, 8 September at KBS Hall, and will air on KBS 2TV. 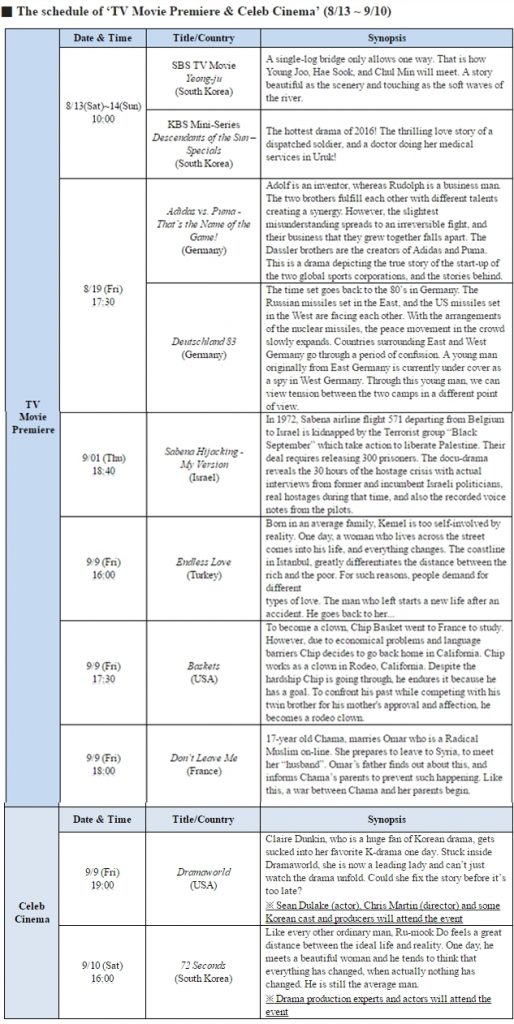 The Seoul International Drama is an exclusive annual festival for international TV dramas. The Awards is recognized for contributing to raising the awareness of the diversity and excellence of worldwide TV dramas. This year, for the 11th edition, SDA received a total of 265 submissions from 51 nations. The Seoul International Drama Awards 2016 will take place on Thursday, September 8 at KBS Hall, and be live telecast on KBS 2TV.