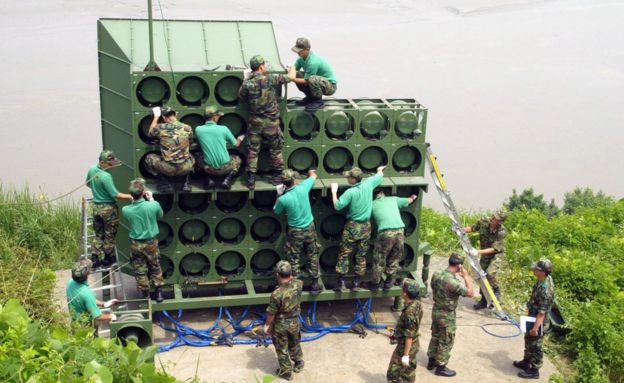 South Korea is beefing up its psychological warfare.

According to CNN, on September 9, North Korea claimed it has successfully conducted its fifth and biggest nuclear test ever, causing a worldwide shock. TV Chosun later said that South Korea would be planning new sanctions and countermeasures against the latest threat of a possible nuclear strike.

According to Korea Times, one of the countermeasures that the South Korean army is currently considering would be adding back a huge electronic display board of K-pop girl bands on top of the loudspeakers that it has already stationed at its border of the demilitarized zone. The board was last used in 2004.

The loudspeakers are used frequently to broadcast latest K-pop hits to North Korea as part of the South Korean army’s psychological warfare strategies whenever there is a provocation by its neighbor.

Facing North Korea, the electronic display board would broadcast not only K-pop girl bands but also international and South Korean news. Furthermore, the army is also considering to deploy an additional mobile electronic display, which boosts a visibility of up to 15km.

Beside the electronic display board, the army will also increase the existing number of loudspeakers by four times.

With these new measures in plan, the army anticipates that they would have a strong psychological impact on North Koreans who live near the border.