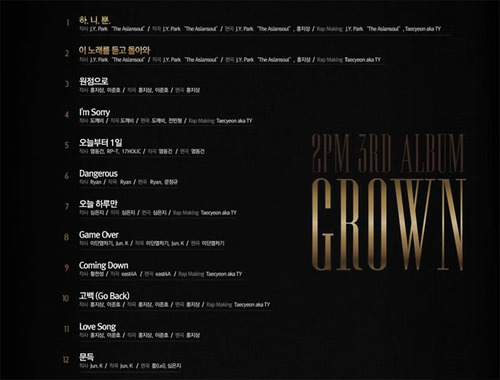 One of the hottest male groups to have ever set foot in the K-pop industry, 2PM, has just unveiled the track list for its impending third album, Grown!

From the track list it is revealed that members Jun.K , Junho and Chansung participated in the making of the album as they were involved in the composing of a majority of the tracks in the album, while member Taecyeon was responsible for self-penning a number of raps featured in the album.  Moreover, notable producers such as Park Jin Young and Duble Sidekick are credited as well.

Are fellow Hottests excited for 2PM’s return to the music scene as the comeback date draws closer?