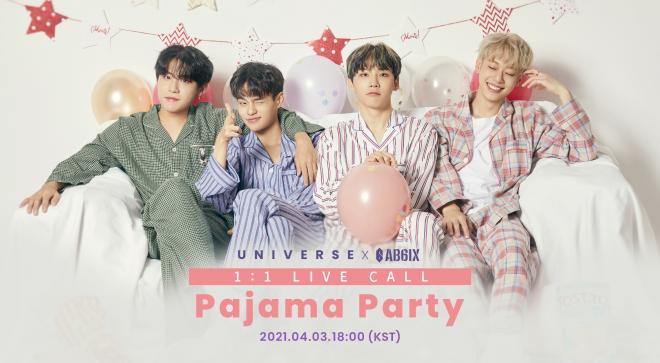 Yes, global ABNEW! Here’s your once in a lifetime chance to get a one-on-one talk with AB6IX!

AB6IX will be spending a special time with fans through their upcoming video call event, AB6IX Pajama Party, exclusively at the fan platform UNIVERSE!

According to a press release published on March 22, KLAP announced the important details regarding the event. Titled UNIVERSE x AB6IX 1:1 Live Call Pajama Party, the video call event will be held on April 3, at 6 PM KST via UNIVERSE application.

Although the current pandemic situation prohibits physical interactions, fans can still make memories with their idols through the online video call.

To participate, fans need to subscribe for a UNIVERSE membership to get raffle tickets. Those raffle tickets will give you the chance to pick a member of your choice. The application period runs from March 22 until 26, at 11:59 PM KST.

Through a random selection, 120 winners will be chosen. The names of the lucky winners will be announced on March 28. They will be entitled to talk to only one member during the event.

The group is immensely loved by global fans as an “all rounder K-pop group”, who can write, compose, and even produce songs. Recently, they further proved their title by releasing their third EP repackage album, “SALUTE: A NEW HOPE.”

By becoming one of the participating artists in UNIVERSE, AB6IX will continuously present various contents such as music, radio, and pictorial, including their original entertainment show AB6IX The Birth of Four Gods: The Beginning.