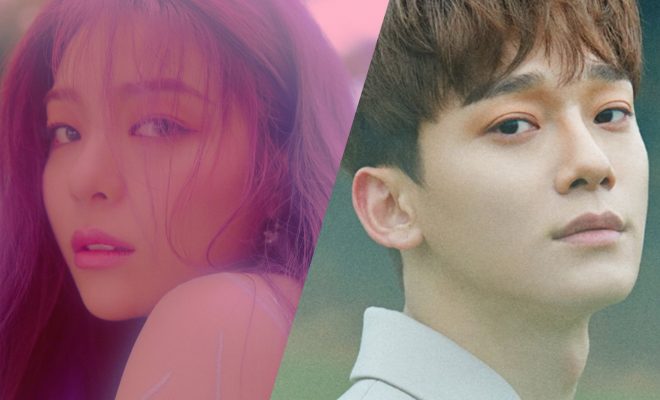 Two of South Korea’s acclaimed vocalists, Ailee and EXO’s Chen, will work together to serenade music fans with their soulful and impressive vocals through a duet.

Ailee heightened the excitement for her much-awaited return to the music scene when she dropped the track list of her new album butterFLY on June 25 via her social media channels. The upcoming release of the singer will feature a total of ten tracks — seven of which were co-written by the singer.

butterFLY will aslo see the collaboration of Ailee and EXO’s Chen through the track called “LOVE”.

According to the singer, she received a lot of requests from fans who hoped to see her work with the EXO member. She added that, in order for the collaboration to happen, she worked hard to contact the “Beautiful Goodbye” singer and asked him to feature in her album which he gladly accepted.

The upcoming team up of Ailee and Chen is already receiving much love and excitement from fans of both singers who proclaimed that “LOVE” will surely be legendary considering the powerful vocals of the two performers. Other fans also labeled it the “collaboration of the century”, showcasing the intense anticipation for the track.

This is gonna be legendary. Ailee and Chen? All the heartbroken men and women of South Korea will come together.

ailee didn't know anyone close to jd but she was able to reach him 😭😭 god works in mysterious ways the collab of the century is happening pic.twitter.com/4WYSi4zOMA

Aside from “LOVE”, butterFLY will also include “Midnight”, “Want It”, “Headlock”, “Room Shaker”, “Nothing At All”, “You Are Just As Precious” (literal translation of “그대는 그대로 소중해”), “Fire”, “Ain’t That Pretty”, and “Heartcrusher”.

Ailee also collaborated with Undaunted and DJ Koo for “Heartcrusher”.

butterFLY will hit physical music stores and digital music sites on July 2. Moreover, it marks the first album of Ailee in almost three years since she came out with her extended play A New Empire.

The singer will unveil two more official teasers before the album drops next week.

We need your support! If you have enjoyed our work, consider to support us with a one-time or recurring donation from as low as $5 to keep our site going! Donate securely below via Stripe, Paypal, Apple Pay or Google Wallet.
FacebookTwitter
SubscribeGoogleWhatsappPinterestDiggRedditStumbleuponVkWeiboPocketTumblrMailMeneameOdnoklassniki
Related ItemsAileeChenEXO
← Previous Story BTS Takes Home Another Guinness World Record As “Map Of The Soul: Persona” Becomes Best-Selling Album In Korean History
Next Story → Kang Daniel Shares His Honest Feelings About Having To Halt His Activities Previously Due To Contract Dispute