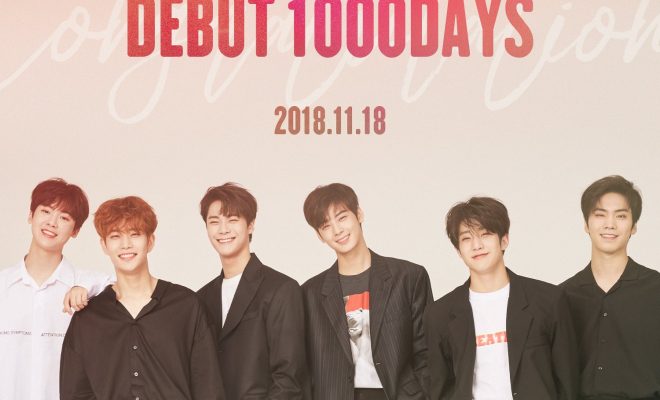 Can you believe it’s been 1000 days since ASTRO made their debut?

ASTRO celebrated their 1000th-Day debut anniversary with fans through a special V Live  on November 18! 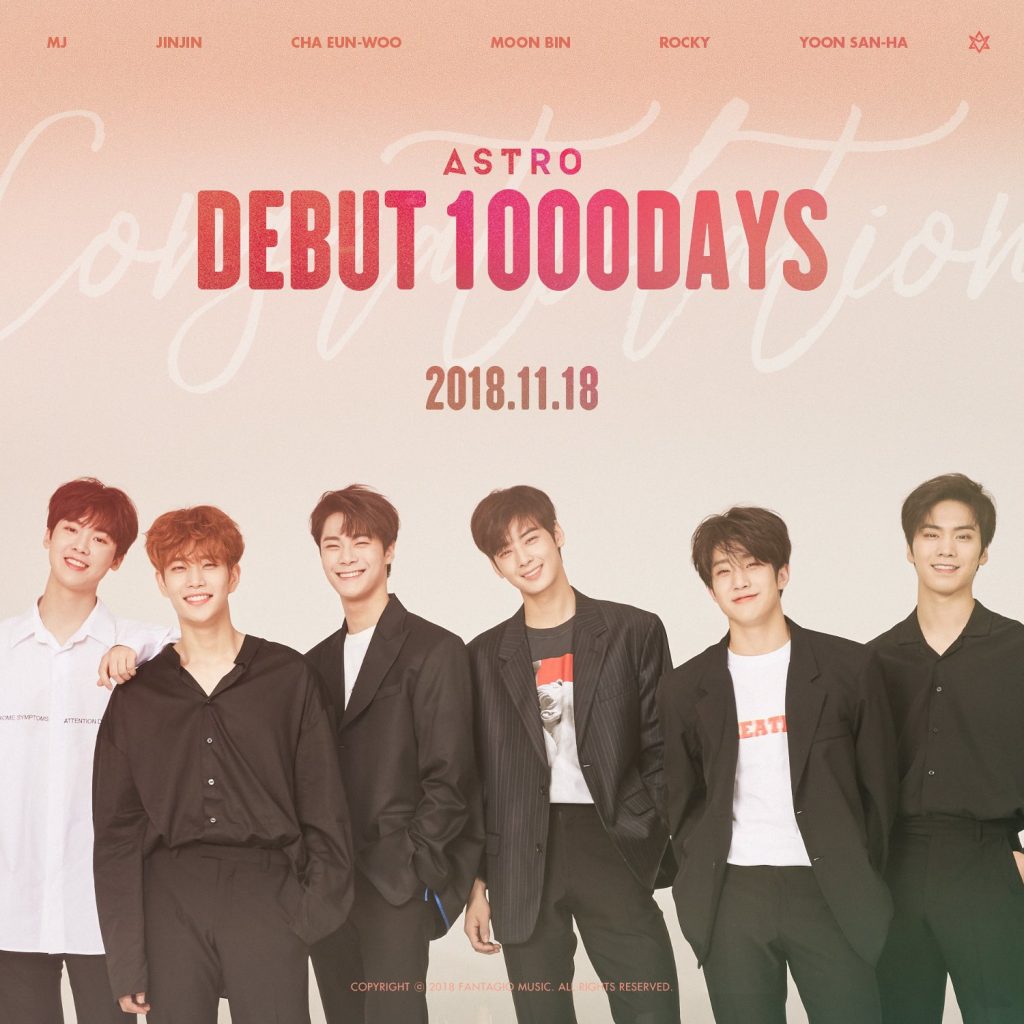 “It’s been 1000 days since Arohas had gotten their fandom name and since we debuted. It feels surreal and it’s like time has whizzed by,” leader JinJin said. “It’s hard to believe it’s our 1000th day. I hope you’ll think of them as good memories and let’s make nicer memories in the future,” he added cheerfully.

Rocky and Moon Bin also mentioned that 1000 days seemed like a long time ago, seeing as the two members had been trainees for Fantagio the longest out of everyone in the group.

Additionally, the six members of ASTRO shared letters they personally wrote for their Arohas prior to the V Live.  “Thank you for always being by our side and watching over us. Let’s continue spending more time and making more good memories in the future,” MJ wrote.

“We have already been with Arohas for 1000 days – I can’t believe it! There had been good times, hard times, and a lot of twists and turns but the good times were definitely more!” JinJin noted. 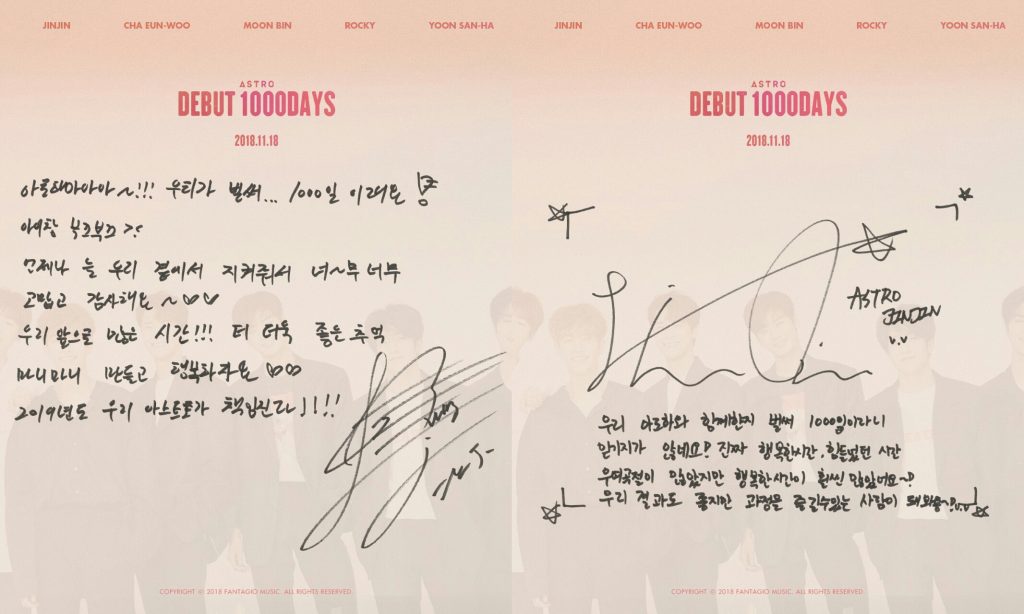 “I remember saying last time that we should be together for 1000 years… or 10000 years. Let’s see each other happily for a long time! I love you,” Cha Eunwoo said.

Moon Bin turned sentimental with his letter, expressing how happy he was to get to where they are with the help of their fans. “Because we walked with you together on the road to where we are now, I was happy and very thankful. In the future, there may be difficulties and times when we get tired, but we will work hard to be a source of strength. Let’s stay strong and be happy,” he noted. 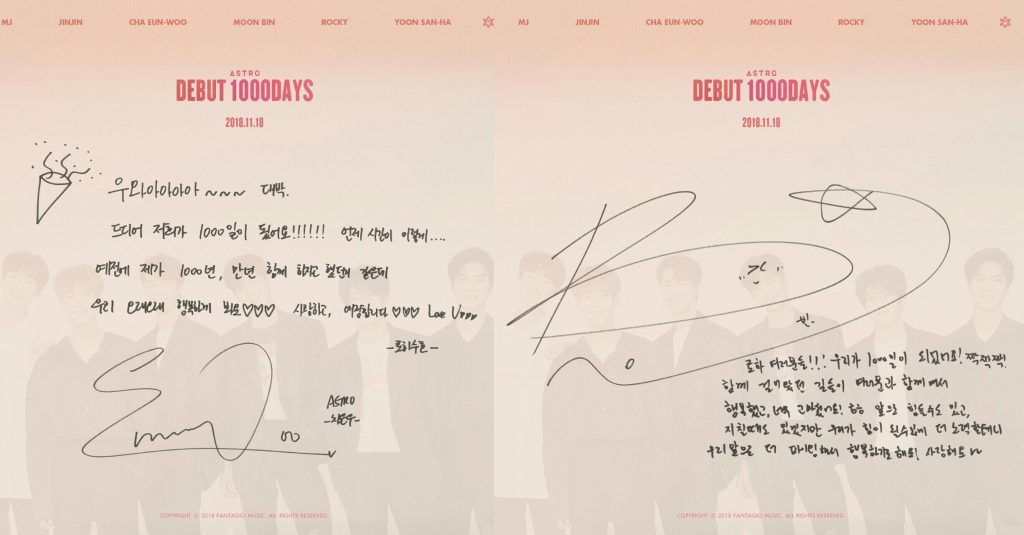 READ: GOT7, MONSTA X, ASTRO & More Complete Line Up For The “Love It, Live It! Pepsi Concert” In November

Lastly, the group’s maknae Sanha noted how the fans send them so much love all the time. “Every time I stand on stage, I always think that I am receiving a lot of love like this. I will work harder so that Rohas will love me even more – please look forward to it!” he said. 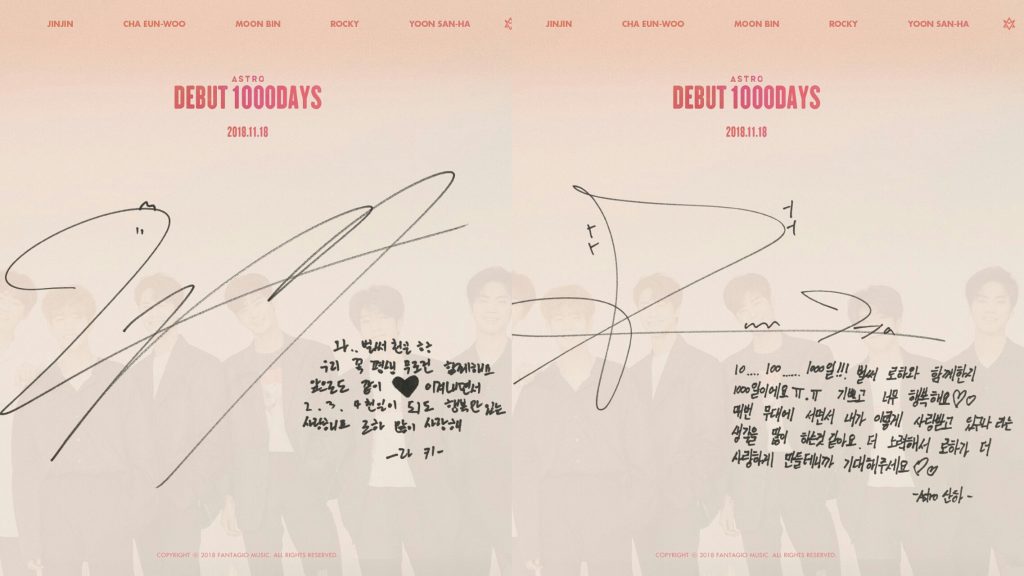 During their V Live, Rocky also hinted at a new album which might be coming soon, while Cha Eunwoo accidentally mentioned something about the group having “drawn something special not too long ago” – which Arohas think is a huge spoiler considering how the other members tried covering it up right after!

Did you celebrate ASTRO’s 1000th day anniversary with them? Let us know by leaving a comment below, giving us a holler on Facebook, or tweeting us at @hellokpop!