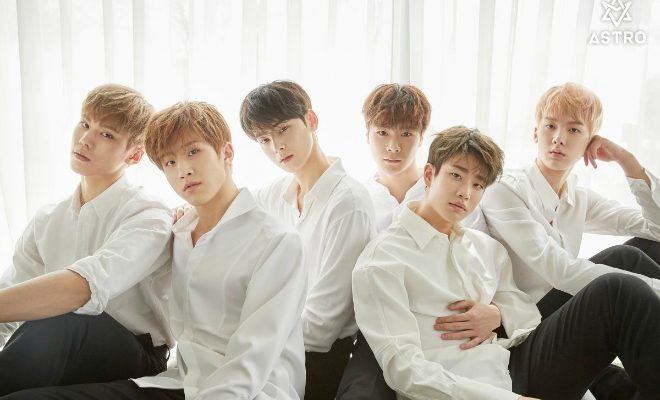 ASTRO is climbing the ranks!

The group, which is composed of MJ, JinJin, Eun Woo, Moonbin, Rocky and Sanha, returned to the music scene with fourth mini album ‘Dream Part.01’ on May 29. The EP is composed of eight tracks that include lyrics by members Jin Jin and Rocky.

Since its release, ‘Dream Part.01’ has sold over 60,000 copies. ASTRO also ranked eighth on the music chart’s best first week sales in 2017.

The group also released the music video for Baby on May 29, which has garnered almost 1.5 million views.

On June 6, a performance video of Baby was released.

The boy group utilized the concept called “dream store” for its comeback wherein the members play songs conceptualized in selling dreams. Aside from its title track Baby, the album contains songs such as Dreams Come True, You Smile, Because It’s You, Dream Night, I’ll Be There, Lie and Every Minute.

ASTRO held an album showcase to commemorate the release of ‘Dream Part.01’ on May 29 with 1, 500 fans. The showcase was broadcasted on Naver’s V Live.

Apart from being busy with their current promotions, the members are in the midst of preparation for ‘The 1st ASTROAD to Seoul’. The concert will be held on July 15 and 16 at Olympic Park, Olympic Hall. It will also mark ASTRO’s first solo concert in South Korea.